After their first telephone conversation since Yoon was inaugurated in May, Kishida told reporters that the two leaders also agreed to maintain communication to build a "future-oriented" relationship between Japan and South Korea.

Earlier in the day, North Korea fired two ballistic missiles from near Pyongyang. On Tuesday, the nuclear-armed country launched a ballistic missile over the Japanese archipelago for the first time in five years. 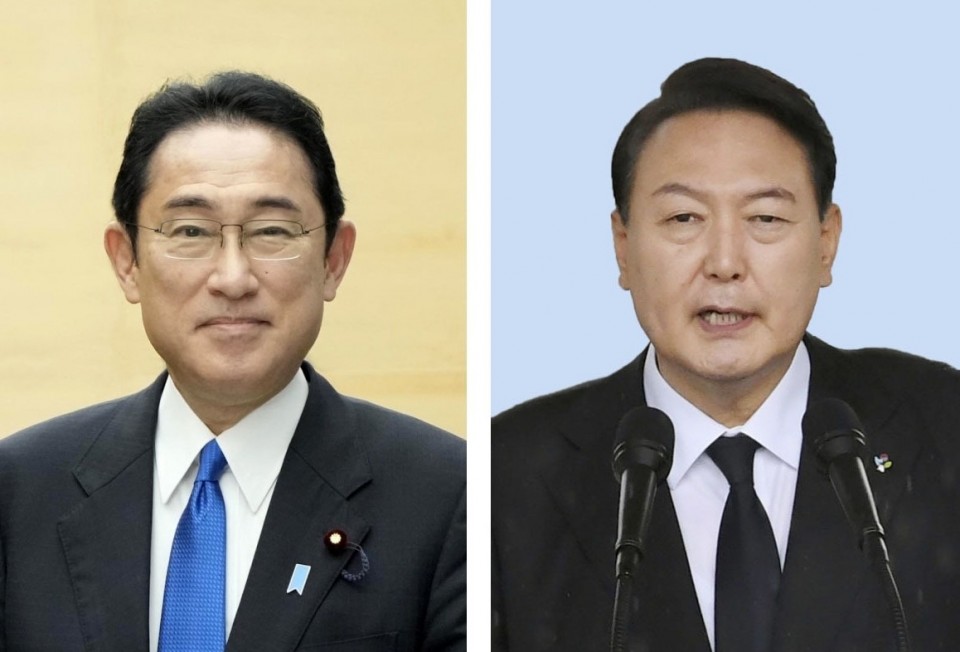 Thursday's missile firing came a day after the nuclear-powered aircraft carrier Ronald Reagan was redeployed to the Sea of Japan for a joint drill.

Japan and South Korea will "continue closely monitoring" whether North Korea will take further provocative actions, including its seventh and first nuclear test since September 2017.

Under the government of Yoon's predecessor, the left-leaning Moon Jae In, relations between Tokyo and Seoul deteriorated to the worst level in decades over wartime labor and territorial issues.

Japan and South Korea, however, have shown signs of a thaw in ties since Yoon took office. Yoon, known for adopting a hard-line stance on North Korea, has pledged to take a future-oriented approach toward Japan.

Kishida said he talked with Yoon on Thursday about "several challenges" the two counties are facing, although he did not elaborate.

Last Friday, Japan, South Korea and the United States also held anti-submarine drills in international waters adjacent to the Sea of Japan, for the first time in five years.

The projectile fired Tuesday from North Korea may have been a Hwasong-12 intermediate-range ballistic missile.

It flew 4,600 kilometers, which is the longest horizontal distance achieved by a missile from North Korea, while reaching an altitude of 1,000 km. The distance is enough to reach the U.S. territory of Guam, where key military bases are located.

After North Korea's launch on Tuesday, Kishida agreed with U.S. President Joe Biden over the phone that the two close security allies will boost their deterrence and response capabilities.

In late September, Kishida and Yoon reaffirmed the nations will aim to restore "sound bilateral relations," in a meeting on the sidelines of the U.N. General Assembly in New York, which was fully closed to the media and described by Tokyo and Seoul as "informal."

The in-person, sit-down talks were the first between leaders of the Asian neighbors since December 2019, while Kishida and Yoon spoke by phone for the first time after Yoon's win in the presidential election in March.