If zombies were coming for you in Jakarta, what would be the best way to reach the capital's "safe zone" -- riding the metropolis's new light rapid train or driving through its notorious traffic?

The answer, the train operator would suggest, is the former -- at least, that was the premise of a recent promotional campaign it staged for young people that saw them take 20-minute journeys while encountering disturbingly realistic zombies portrayed by actors at stops along the way. 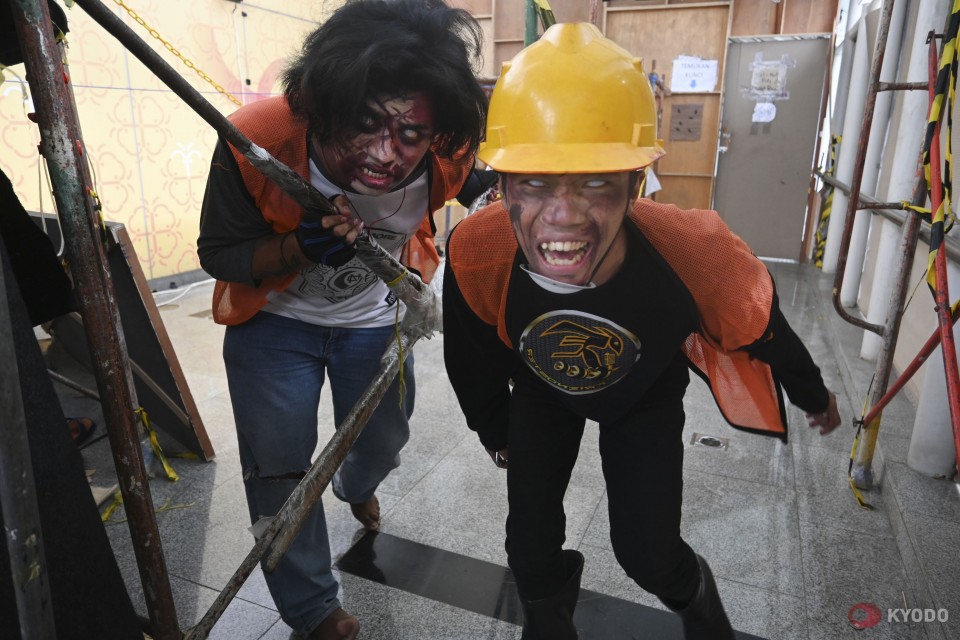 "Zombies" chase participants inside a train station in Jakarta on Sept. 9, 2022, during a promotional campaign for young people to encourage them to use the new light rapid train. (Kyodo)

Encouraging young people to use public transportation was the objective of PT Lintas Raya Terpadu Jakarta and event organizer Pandora Box when launching the attraction, inspired by a popular South Korean horror movie, in August. It took place in station areas and inside the train cars.

"This attraction has played a very significant role in increasing the number of LRT passengers...and we hope it can be a campaign to raise awareness of our service to attract more passengers in the future," 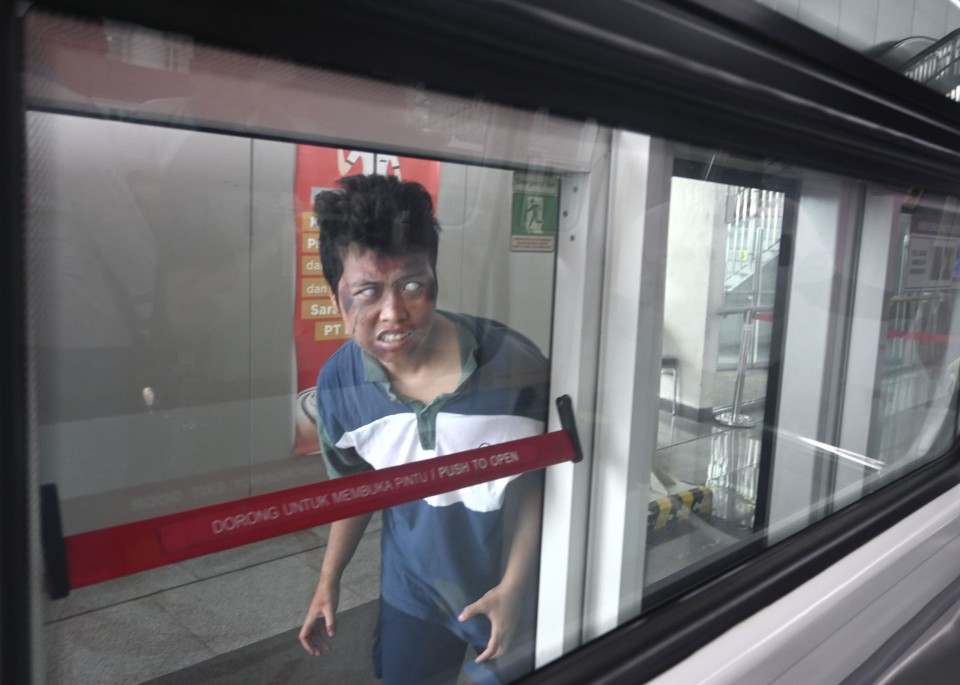 A "zombie" glares inside a train car from a station platform in Jakarta on Sept. 9, 2022. (Kyodo)

Participants paid 60,000 rupiah (about $4), including the train fee of 5,000 rupiah, to join the fun. Called "survivors," the passengers were evacuated to another station that was declared to be the safe zone. Actors wearing military uniforms and carrying toy rifles fought off the zombies while protecting the passengers and escorting them to safety.

The zombie actors were dressed in rags and wore makeup featuring eerily white eyes and blood-stained mouths. They dragged their feet along the tunnels and stairs and jumped out suddenly at times. 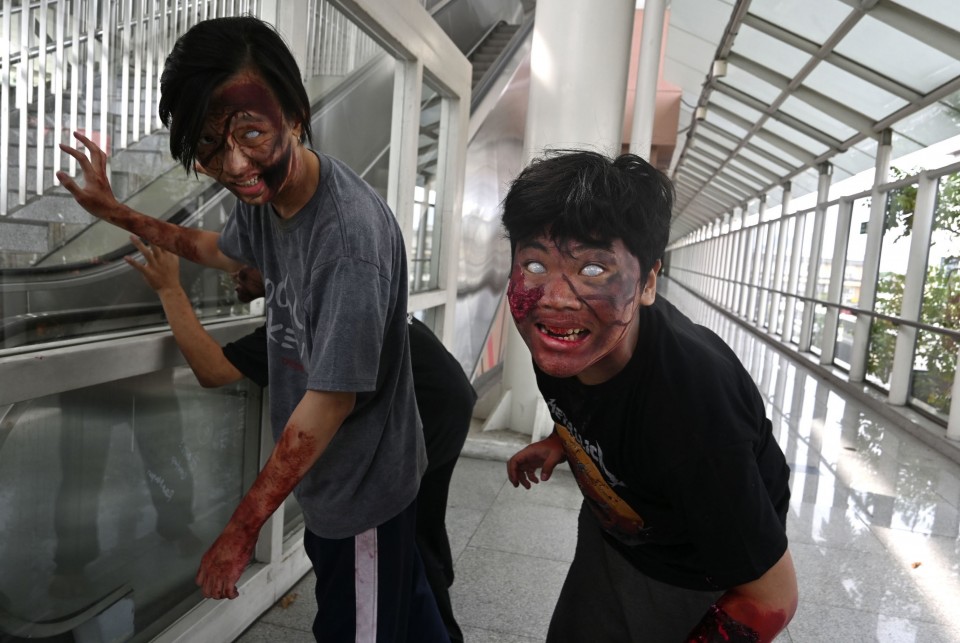 "Zombies" chase participants inside a train station in Jakarta on Sept. 9, 2022. (Kyodo)

Inside a train car with fake blood splattered on the walls, a television anchor announced that "the Pandora virus," originating in South Korea, had entered Indonesia, turning people into zombies within "3 minutes" of infection.

"I wasn't expecting it to be this scary. I felt I would die running up and down, trying to escape from the zombies," thrill seeker Mugi Harto, 15, said during one event. In the confusion, his friend, Desti Natalia, lost a shoe while trying to escape. 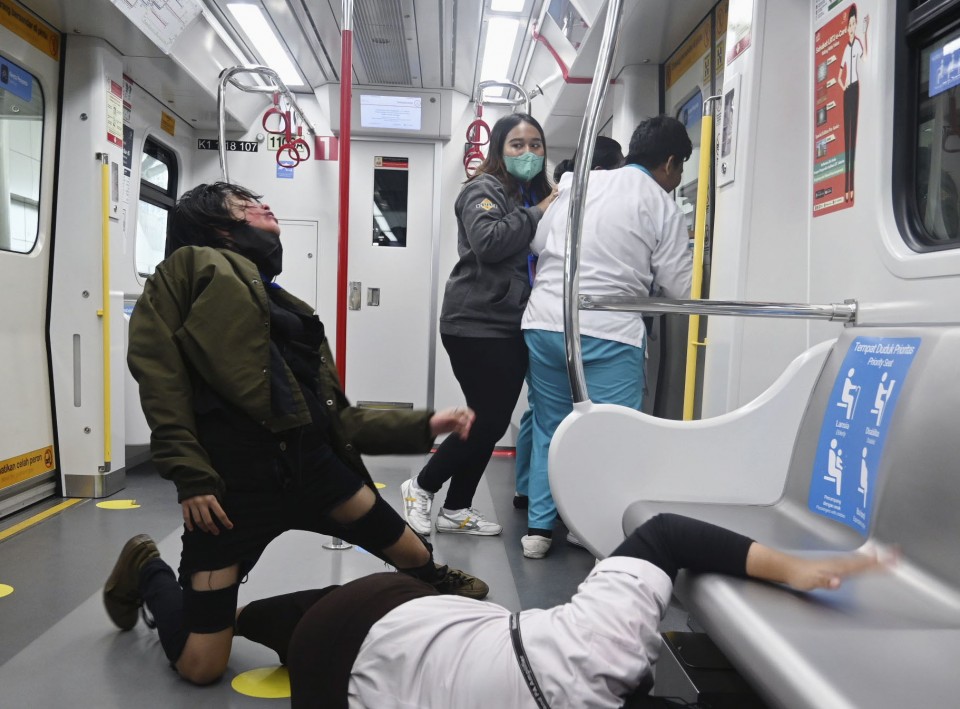 Called "Train to Apocalypse," the attraction was inspired by the 2016 South Korean thriller "Train to Busan."

Feby, a horror movie enthusiast who joined her friends on the ride, said they all had seen the movie but thought the event in Jakarta was even scarier, "probably because we experienced it ourselves." 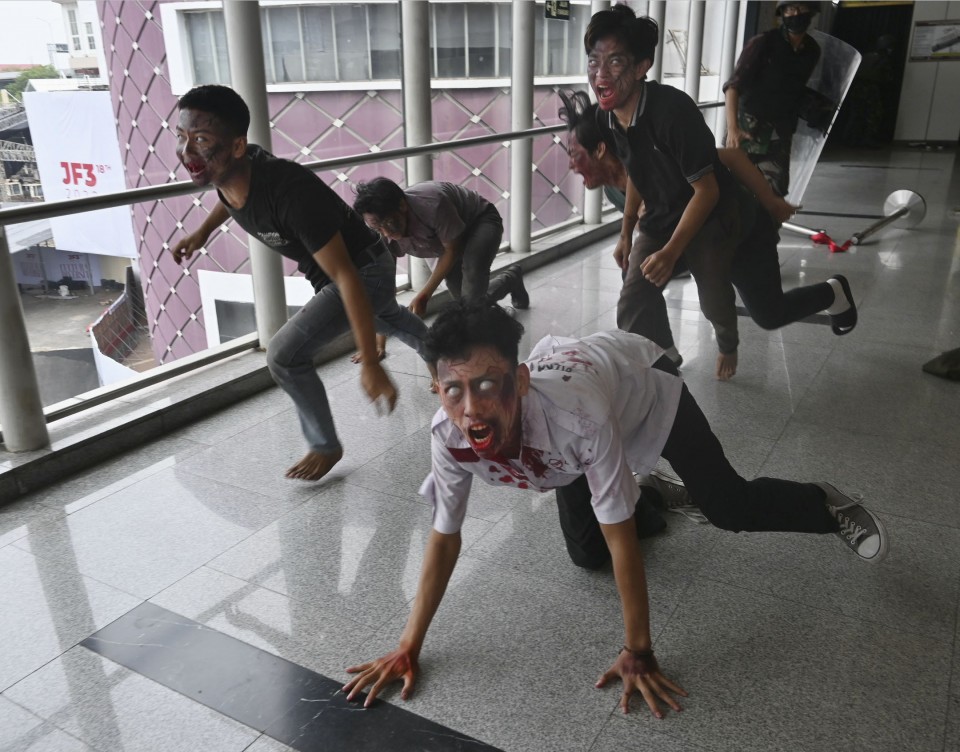 "Zombies" surprise participants inside a railway station in Jakarta on Sept. 9, 2022. (Kyodo)

Jakarta and its suburbs have a population of almost 33 million people, and traffic congestion and pollution are some of the capital's biggest headaches. LRT began commercial operations along a 5.8-kilometer stretch in December 2019 in one of the efforts to improve the situation.

The service, however, has been unable to attract many passengers due to its short route, according to transportation experts. The route is expected to be expanded in the near future.

Ending his journey on the zombie train, Mugi still looked shaken up as he repeatedly glanced warily at the train's windows and doors. A first-time LRT rider, he was pleased with the comforts of traveling by train.

"I'll take this train again on other occasions, but of course, not with the zombies on board," he said.