Kofu, who have never won a major title, will face Sanfrecce Hiroshima in the Oct. 16 final at Nissan Stadium after they beat fellow J1 side Kyoto Sanga 2-1 in extra time.

Fighting in the J2 since getting relegated from the J1 after the 2017 season, Kofu came into the match on the back of six straight defeats in the second tier where they languish in 18th place.

Kashima have been without a win in the last six themselves, however, drawing four and losing two to drop out of contention for the J1 title, and they suffered their latest setback at home at Kashima Stadium. 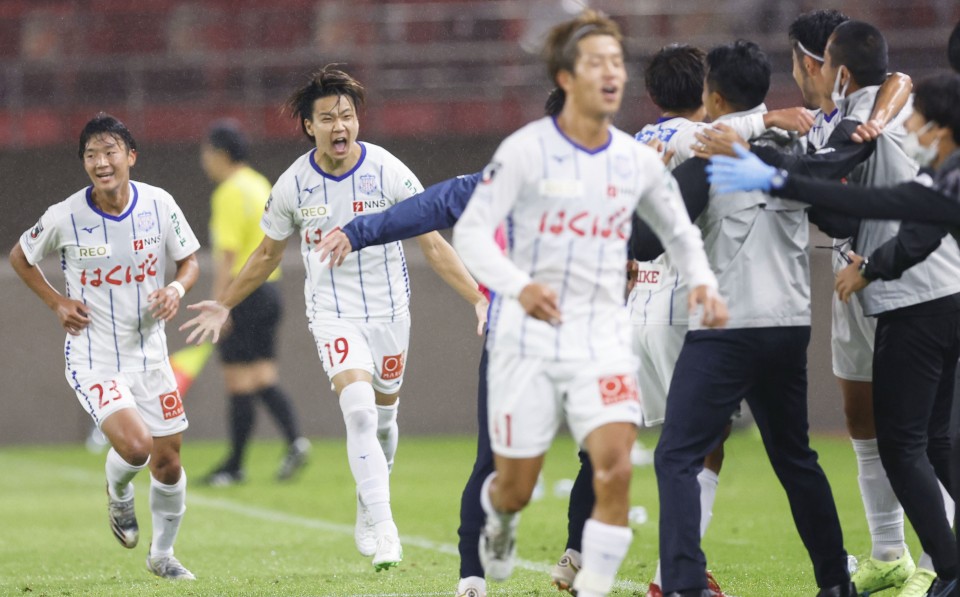 Junma Miyazaki (19) of Ventforet Kofu celebrates after scoring against Kashima Antlers in their Emperor's Cup semifinal at Kashima Stadium  in Ibaraki Prefecture, northeast of Tokyo, on Oct. 5, 2022. (Kyodo)

While Kashima dominated from the start, Kofu had a 21st-minute goal from Kazushi Mitsuhira ruled out for offside before taking the lead, set up by a well-weighted long ball in the air from defender Niki Urakami.

Miyazaki timed his run to sneak behind the Kashima backline and controlled the ball perfectly before rounding onrushing keeper Kwoun Sun Tae to roll the ball home.

"We have worked on that pattern between us two throughout the season. It's great it has come off," said the forward. "I think I thrive more in big matches. I want to score in the final too."

Kashima threw everything forward in the second half with forward Yuma Suzuki's early cross from the right setting up Everaldo in the 67th minute but the Brazilian's close-range header was saved on the line by Kofu keeper Kohei Kawata.

Kawata was called into action again at the death when the ball fell to Kashima defender Kim Min Tae but the keeper again rose to the occasion before the final whistle sparked wild celebrations for the underdogs.

"I think nobody expected us to win and we wanted to defy that. I'm extremely happy," said Kofu manager Tatsuma Yoshida, who has led Kofu to wins over J1 sides Consadole Sapporo, Sagan Tosu and Avispa Fukuoka en route to their latest upset.

They become the first J2 side to reach the Emperor's Cup final since Montedio Yamagata, who lost 3-1 to Gamba Osaka in 2014. 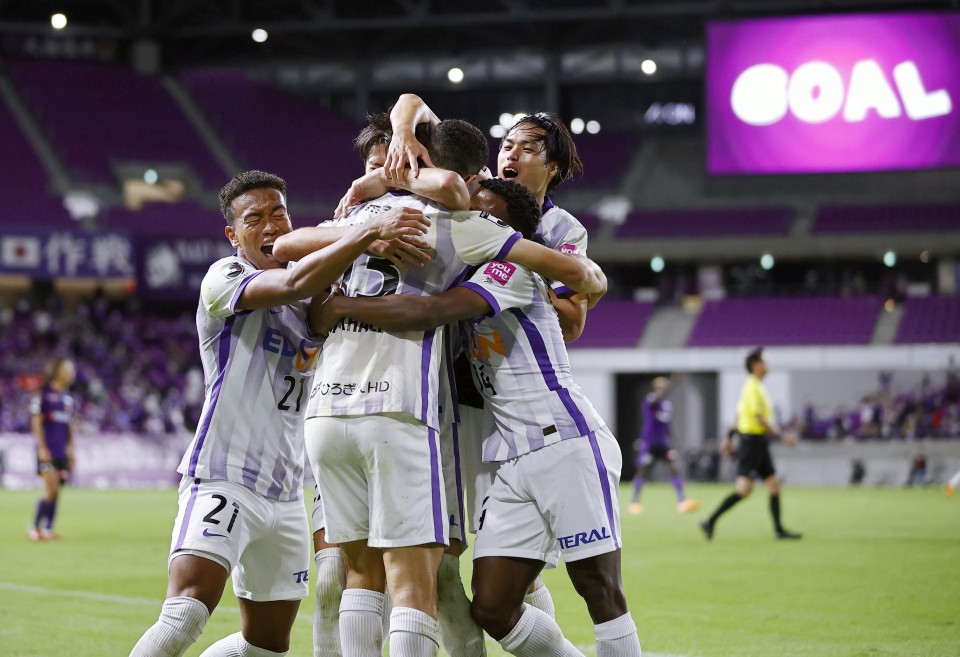 Nassim Ben Khalifa (front, C) is mobbed by his Sanfrecce Hiroshima teammates after scoring an extra-time winner against Kyoto Sanga in their Emperor's Cup semifinal at Sanga Stadium in Kameoka, Kyoto Prefecture, on Oct. 5, 2022. (Kyodo)

At Sanga Stadium, Douglas Vieira gave Sanfrecce the lead with a 40th-minute penalty before Kyoto's Nigerian forward Origbaajo Ismaila volleyed high into the net in the 79th minute to equalize after coming on as a substitute.