Chinese leader Xi Jinping hailed Sunday what he views as the Communist Party's achievements during his 10 years at the helm and reiterated Beijing's commitment to reunification with Taiwan, as he gave the opening speech at the party's twice-a-decade congress.

Xi, who is set to secure an unprecedented third five-year term as general secretary at the nation's most important political event, lauded the party's "historic achievements" such as poverty reduction and stressed that it will "unswervingly advance the cause of national reunification" with Taiwan.

Chinese President Xi Jinping claps his hands during the first day of the 20th National Congress of the Chinese Communist Party on Oct. 16, 2022, at the Great Hall of the People in Beijing. (Kyodo) ==Kyodo

"We will never promise to renounce the use of force, and we reserve the option of taking all measures necessary," Xi said on Taiwan, a self-ruled democratic island that Beijing regards as its own, adding his remarks are directed at "interference by outside forces and the few separatists" seeking the island's independence.

He urged all the 96.7 million party members to strive in unity to build "a great modern socialist country" and "accelerate efforts to foster a new pattern of development" different from Western nations as he spoke for nearly two hours at the opening session of the weeklong congress convened at the Great Hall of the People.

Xi also called for a rapid elevation for "our people's armed forces to world-class standards," indicating the party will move forward the deadline of the goal on boosting capabilities of the People's Liberation Army from the mid-21st century.

He said China will "establish a strong system of strategic deterrence," suggesting that Beijing could enhance its nuclear capability.

On Taiwan, Xi said realizing China's complete reunification is a "historic mission" for the party and a "natural requirement" for achieving the rejuvenation of the Chinese nation, which it aims to complete by 2050.

He warned against any interference by the United States or other countries amid heightened cross-strait tensions following U.S. House of Representatives Speaker Nancy Pelosi's visit to the island in early August.

"In response to separatist activities aimed at 'Taiwan independence' and gross provocations of external interference in Taiwan affairs, we have resolutely fought against separatism and countered interference, demonstrating our resolve and ability to safeguard China's sovereignty and territorial integrity," Xi said.

A rift between Beijing and Washington has been deepening with China fiercely reacting to Pelosi's Taiwan visit by carrying out large-scale military drills around the island.

In the speech, Xi also defended China's radical "zero-COVID" policy to stem coronavirus infections, saying the country launched an "all-out people's war" against the epidemic and succeeded in protecting lives "to the greatest extent possible." 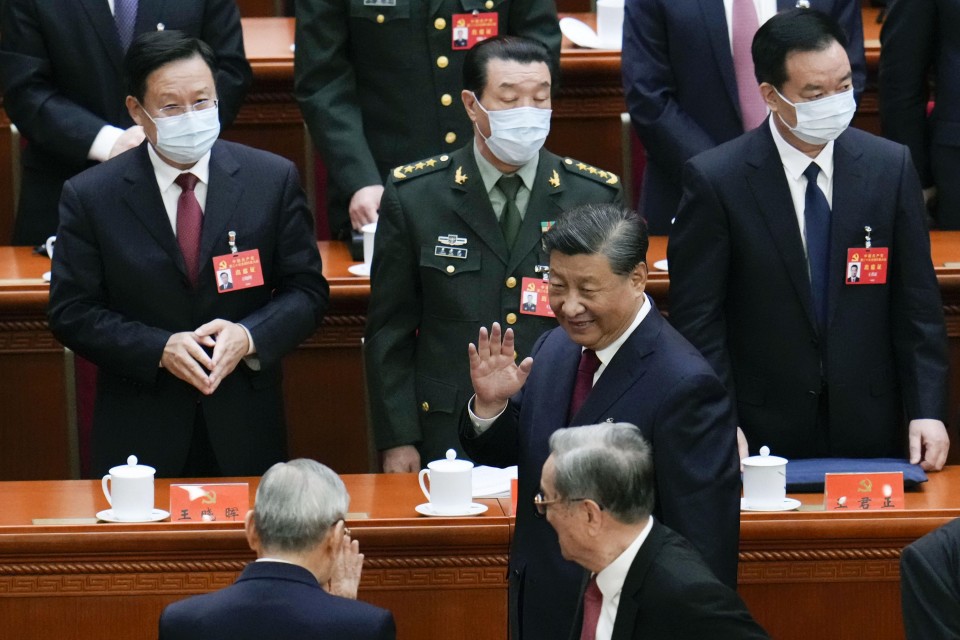 Chinese President Xi Jinping (bottom, facing camera) waves as he leaves after attending the first day of the 20th National Congress of the Chinese Communist Party on Oct. 16, 2022, at the Great Hall of the People in Beijing. (Kyodo) ==Kyodo

Public frustration has grown over the stringent measures involving the imposition of lockdowns on cities where outbreaks occur and critics say they have helped slow the growth of the world's second-largest economy.

But Xi defied such views, claiming China made "tremendously encouraging achievements in both epidemic response and economic and social development."

Referring to Hong Kong, a former British colony and a semiautonomous region of China, Xi said "order has been restored" in the territory, "marking a major turn for the better" following Beijing's enactment of a national security law in 2020 that enabled authorities to crack down on pro-democracy protests.

The Chinese central government moves ensured "Hong Kong is governed by patriots," Xi said. Beijing will "crack down hard on anti-China elements who attempt to create chaos" and "take resolute action to prevent and stop interference" by external forces, he added.

Beijing has been tightening its grip on Hong Kong after large-scale protests against an unpopular bill morphed into a pro-democracy movement in 2019.

As for a long-term goal, Xi said China aims to become a great modern socialist country that is prosperous, strong and culturally advanced from 2035 through the middle of this century.

He pointed out the modernization process will be "characterized by features that are unique to the Chinese context" such as "common prosperity for all," aimed at reducing income gaps in China. Under the goal, Beijing has imposed regulations on the nation's lucrative sectors such as the IT and financial industries.

Through the implementation of such economic policies, Xi pledged to substantially grow the country's per capita gross domestic product "to be on par with that of a mid-level developed country."

The leader also said China will boost its strength in science and technology amid intensifying competition with the United States in the sector to "achieve greater self-reliance," making its industrial and supply chains more resilient and secure.

Xi said China has made "breakthroughs in some core technologies in key fields" with major successes in such areas as space development, supercomputers, quantum information and nuclear power technology.

He also said China is committed to its foreign policy goals of upholding world peace and "stands firmly against all forms of hegemonism and power politics, the Cold War mentality, interference in other countries' internal affairs and double standards," alluding to its confrontation with the United States.

At the congress, the party is expected to amend its Constitution to incorporate wording indicating the 69-year-old leader's power and authority have been cemented, justifying what would be a norm-breaking extension of power for Xi. 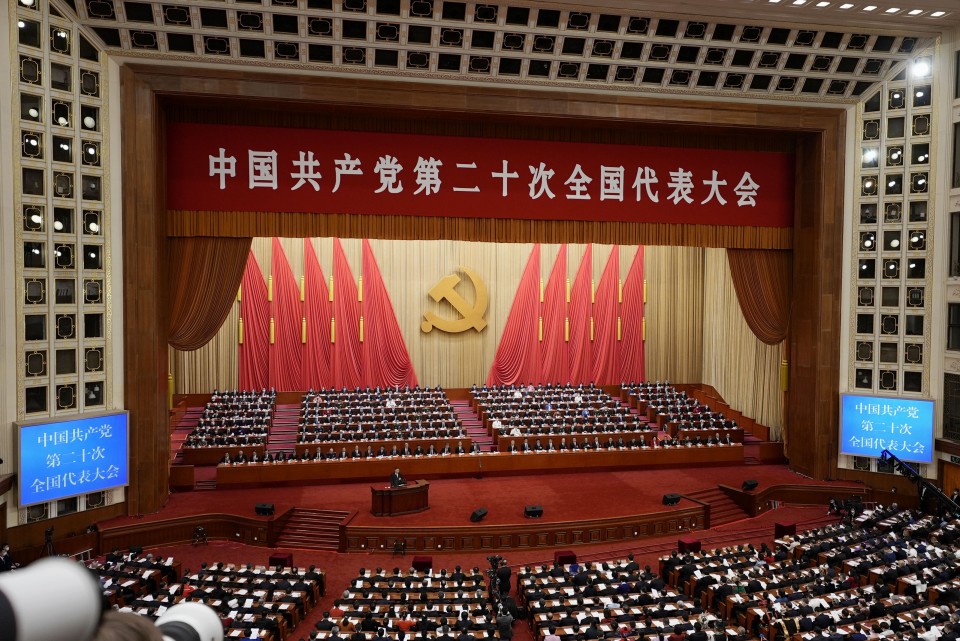 The 20th National Congress of the Chinese Communist Party opens on Oct. 16, 2022, at the Great Hall of the People in Beijing. (Kyodo) ==Kyodo

Xi became the party's general secretary in 2012 and is already the most powerful leader in decades in the country.

The party's 20th National Congress will also see a reshuffle of its leadership, with attention drawn to who would succeed Premier Li Keqiang, 67, who is set to retire next spring, and whether he will stay on in the seven-member Politburo Standing Committee -- the country's highest decision-making body.

Wang Yang, 67, chairman of the National Committee of the Chinese People's Political Consultative Conference, is a potential successor to Li, who is in charge of steering economic policy.

If the party's unwritten but de facto retirement age of 68 is applied to Politburo members other than Xi, two of the remaining six will step down -- top legislator Li Zhanshu, 72, and Vice Premier Han Zheng, 68.

Whether Xi can install trusted allies and loyalists on the standing committee and the wider Politburo, which now has 25 members, will also be a focus.

The new composition of the standing committee is expected to be unveiled one day after the congress concludes next Saturday, while around 2,300 delegates will also endorse a new Central Committee of some 200 members.

The previous congress in 2017 enshrined in the party constitution "Xi Jinping Thought on Socialism with Chinese Characteristics for a New Era," making his status comparable to Communist-led China's founding father, Mao Zedong, and Deng Xiaoping, the architect of the country's reform efforts.

Xi pitched his long-term rule to make China as strong as U.S.

China plans to continue "zero-COVID" policy until next spring