A 178-strong group of people all called Hirokazu Tanaka broke the Guinness World Record for the largest gathering of people with the same first and last name, after they came together in Tokyo on Saturday.

The Tanaka Hirokazu association organized the successful attempt in Shibuya Ward, which saw them outdo the 2005 record set by 164 people called Martha Stewart, who were brought together by the famous American businesswoman of the same name.

The new record holders span the generations, with participants aged between 3 and 80, and come from numerous backgrounds and professions. One Hirokazu Tanaka even traveled from Vietnam to attend the event, whose rules for certification required attendees to be in the same location within a five-minute period. 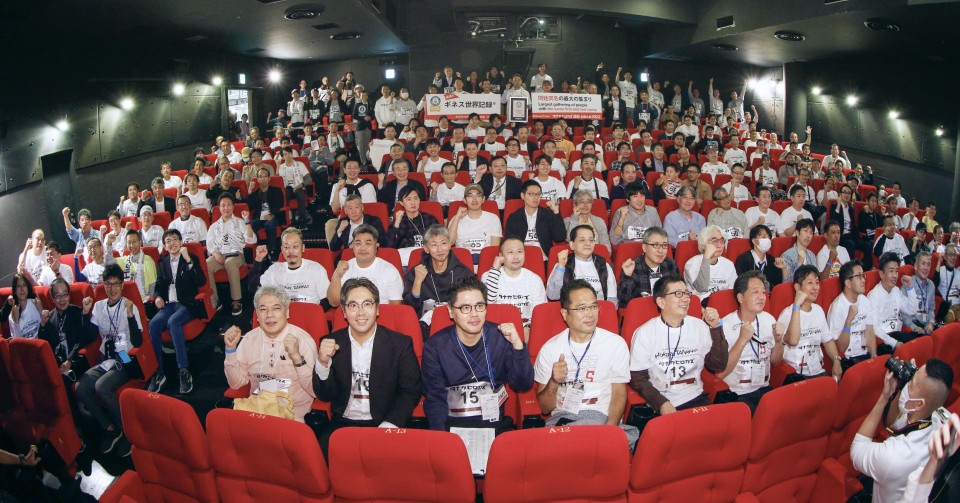 A 178-strong group of people all called Hirokazu Tanaka meet at a hall in Tokyo's Shibuya Ward on Oct. 29, 2022, breaking the Guinness World Record for the largest gathering of people with the same first and last name. (Kyodo) ==Kyodo

A representative of the association, Hirokazu Tanaka, 53, said it was the group's third try after two failed attempts in 2011 and 2017, when 71 and 87 Hirokazu Tanakas turned up respectively.

Reflecting on their achievement, the 53-year-old Tanaka said, "Without creating anything or producing any kind of result as such, we have, just by being here, been able to become number one in the world at something."

Previous challenges were thwarted by the association's adherence to a stricter criteria in which all Hirokazu Tanakas had to share the same kanji Chinese characters to read their names. But because the guidelines for the record recognize anyone so long as the reading of their names is the same, the group cast its net wider this time. 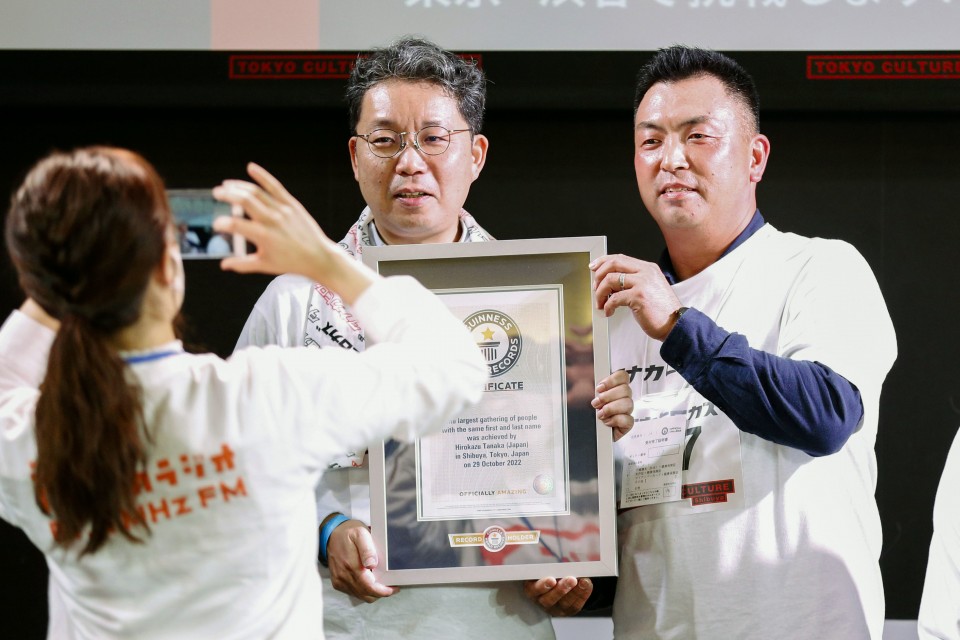 Hirokazu Tanaka (C), the representative of the Hirokazu Tanaka association, holds up the Guinness World Records certificate for the largest gathering of people with the same first and last name with Hirokazu Tanaka (R), the former pro baseball player who inspired him to start the group, in Tokyo on Oct. 29, 2022. (Kyodo)

The association's representative Tanaka founded the organization for people with the same appellation as him in 1994. His inspiration came from seeing a Hirokazu Tanaka become the first player to be called up for the Japanese pro baseball team, then known as the Osaka Kintetsu Buffaloes, at the sport's annual entry draft.

Now, former baseball player Tanaka himself is also a member of the group going by the nickname "pitcher," and was among the 178 record breakers. He said it was "such a weird feeling" that all the members have the same name, and added that he was "deeply moved" by the event.

Originally planned for 2020 to coincide with what was then expected to be the year for the 2020 Tokyo Olympic and Paralympic Games, the world record attempt was, like the Games, postponed due to the coronavirus pandemic.