The Orix Buffaloes, champions of Japan's Pacific League, beat the Central League champion Yakult Swallows 5-4 in Game 7 on Sunday to win their franchise's first Japan Series since Ichiro Suzuki and the Orix BlueWave triumphed in 1996.

Down 2-0 with one tie after three games, the Buffaloes won four straight games, coming from behind to tie the series at two wins apiece in a three-run Game 5 comeback and never trailed after that, surviving a late Swallows rally on Sunday. 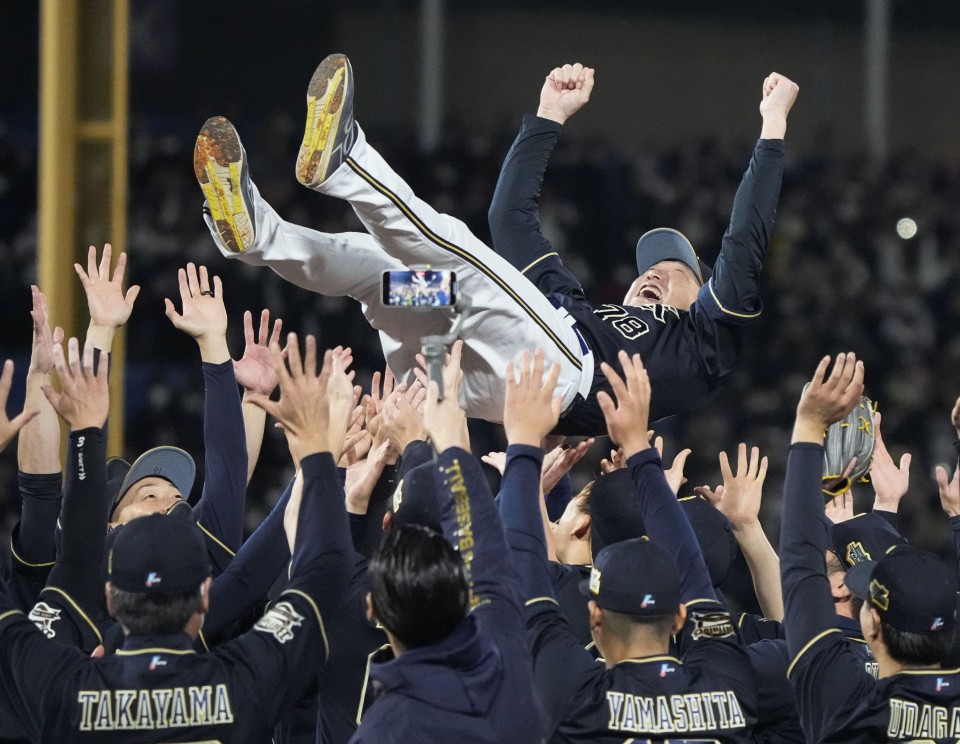 Orix Buffaloes manager Satoshi Nakajima is tossed in the air by his players after the team claimed the Japan Series baseball title with a 5-4 Game 7 win over the Yakult Swallows at Jingu Stadium in Tokyo on Oct. 30, 2022. (Kyodo)

Lefty Hiroya Miyagi, working on four days rest after taking the loss in Game 3, started for the Buffaloes and had great movement and deception in Game 7 at Tokyo's Jingu Stadium, getting the Swallows hitters to chase out of the zone.

He allowed three hits and a walk over five innings while striking out five.

"It must have been hard on him (Miyagi), but he pitched great for us and I'm thankful," Orix manager Satoshi Nakajima, a catcher on the BlueWave's 1996 championship team, said.

Ryo Ota put Orix on the board on the first pitch, going down for a low Cy Sneed fastball and hitting it out to center for a leadoff home run.

"We really wanted to score first, and Ota doing that unbelievably on the first pitch was big for us," Nakajima said. "I put him in the lineup and batted him first because I wanted a guy who was going up there to swing the bat."

The game remained close until the fifth inning, when catcher Torai Fushimi led off with a single. Back-to-back bunt singles followed, a lucky one by Miyagi, and a beauty by Ota down the third base line, with third baseman Munetaka Murakami playing back for a force at the bag.

Sneed got a lucky break of his own, a double play on a ball smashed to first baseman Jose Osuna, but a walk and a hit batsman made it 2-0, and center fielder Yasutaka Shiomi missed a line drive hit by Yutaro Sugimoto for a three-run, three-base error.

Sugimoto, who twice singled in the first runs when Orix held Yakult scoreless and had an RBI single in Game 2's tie, was named the series' MVP.

"Yakult is such a strong team. Losing last year left us with a bitter taste in our mouths. We were able to get back at them this time though and it feels good."

With a big lead, Buffaloes then went to their bullpen, getting two scoreless innings from rookie Yuki Udagawa before the Swallows scored four runs in the eighth off Orix's third pitcher, Soichiro Yamazaki, three on Jose Osuna's second home run of the series.

Side-armer Motoki Higa got out of the inning to preserve the lead.

Fushimi gave Orix a leadoff double in the ninth, but Osuna threw out his second runner at the plate to keep it a one-run game.

Jacob Waguespack, who earned the win in the Buffaloes' 6-4 Game 5 win, earned his third save of the series with a 1-2-3 ninth. 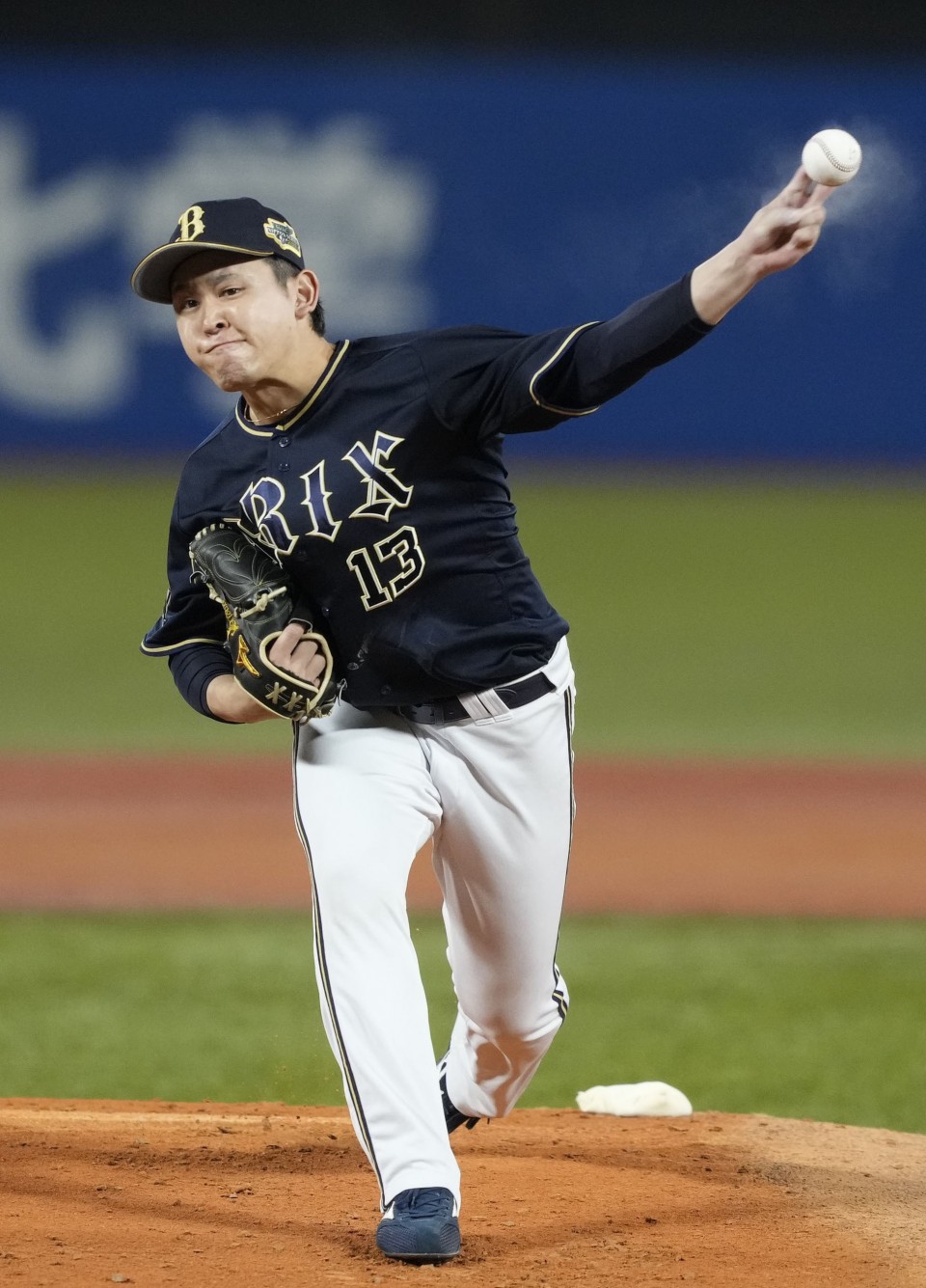 Hiroya Miyagi of the Orix Buffaloes pitches against the Yakult Swallows in Game 7 of the Japan Series at Jingu Stadium in Tokyo on Oct. 30, 2022. (Kyodo) 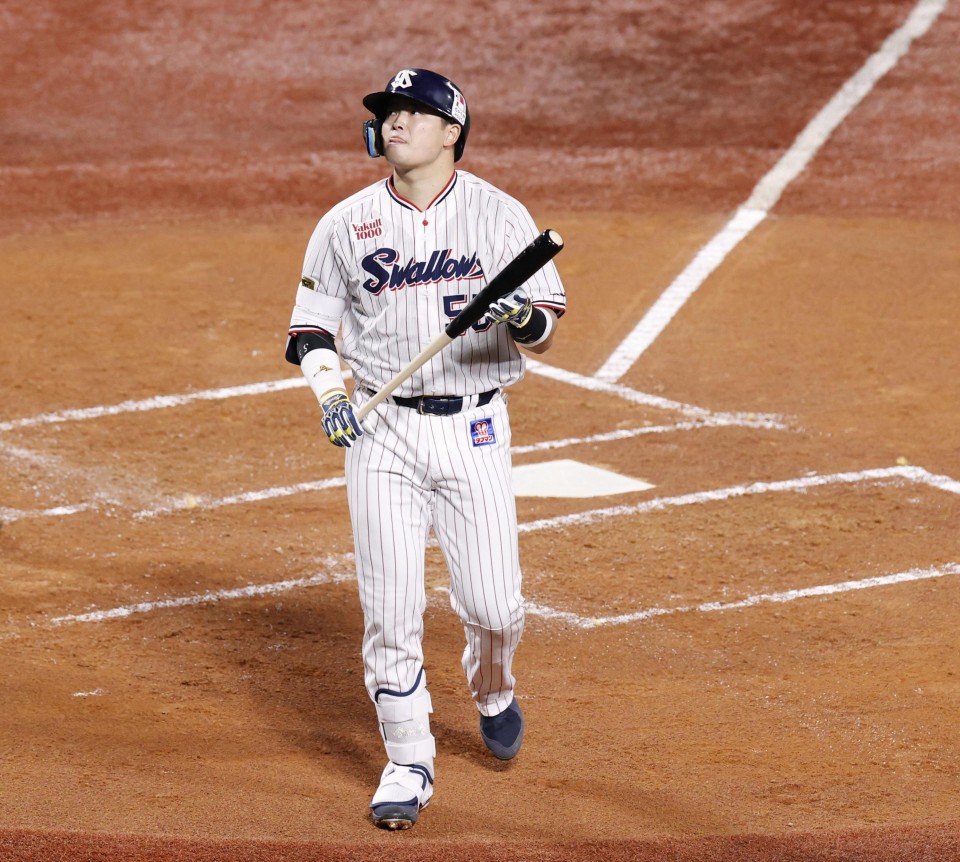 Munetaka Murakami of the Yakult Swallows walks back to the dugout after being called out on strikes in the second inning against the Orix Buffaloes in Game 7 of the Japan Series at Jingu Stadium in Tokyo on Oct. 30, 2022. (Kyodo) 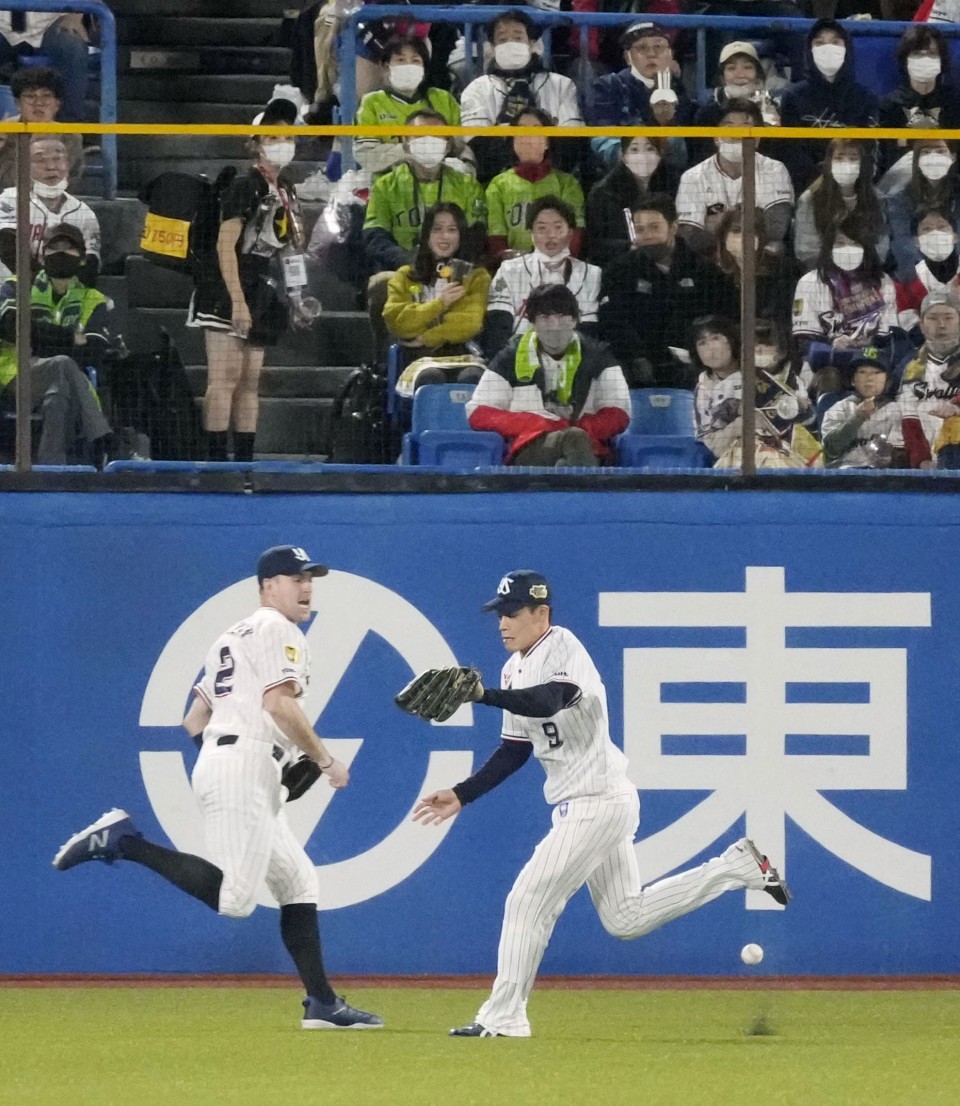 Yakult Swallows center fielder Yasutaka Shiomi (R) drops a fly ball hit by Yutaro Sugimoto of the Orix Buffaloes, allowing three runners to score in the fifth inning in Game 7 of the Japan Series at Jingu Stadium in Tokyo on Oct. 30, 2022. (Kyodo)