The 22-year-old Murakami and Sasaki, who will turn 21 six days before the two-game series at Sapporo Dome opens on Nov. 9, headline a young team in the buildup to next March's World Baseball Classic. 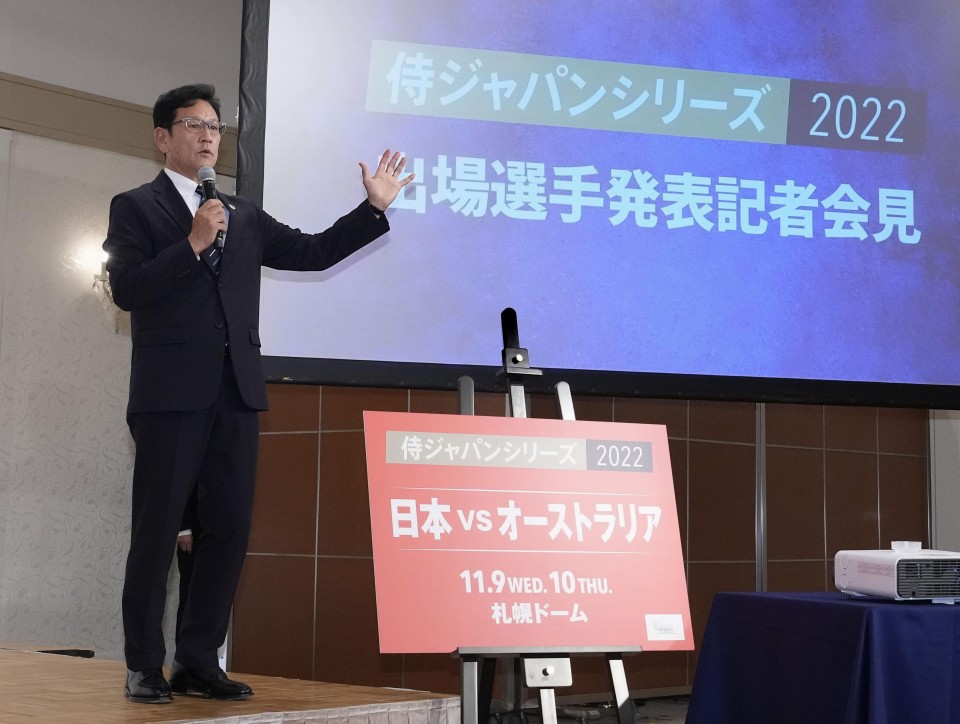 Hideki Kuriyama, the manager of Japan's national baseball team, Samurai Japan, announces his squad in Tokyo on Oct. 4, 2022, for four November games. Samurai Japan will play the Nippon Ham Fighters and Yomiuri Giants at Tokyo Dome on Nov. 5 and 6, respectively, before playing Australia in two games on Nov. 9 and 10 at Sapporo Dome. (Kyodo)

"I'm pleased with this opportunity to be able to play alongside those of national-team caliber," Sasaki said. "I expect this time to be precious, so I want to absorb different things and use that to further my pitching career going forward."

Missing from the roster are a trio of Pacific League MVP candidates, Orix Buffaloes ace Yoshinobu Yamamoto and his teammate, outfielder Masataka Yoshida, along with PL home run leader Hotaka Yamakawa of the Seibu Lions.

"Japan's baseball world is in a period of transition," manager Hideki Kuriyama said. "I selected the team thinking this was the best one to win the games in November."

MLB players will not be available until the WBC, when pitcher Yu Darvish, outfielder Seiya Suzuki and two-way superstar Shohei Ohtani are expected to be on Japan's roster.

Samurai Japan will also play warmup games at Tokyo Dome against the Nippon Ham Fighters on Nov. 5 and the Yomiuri Giants the following day.