While the Imperial Japanese Army used portions of the poison gas weapons it manufactured mainly during the 1937-1945 Sino-Japanese War, the rest were abandoned or disposed of in China and Japan.

A number of unexploded shells filled with poison gas or such gas in other forms were found in more than 40 locations in China and over 30 areas in Japan -- from Hokkaido to Kyushu, according to the Japanese government.

The issue remains unresolved even after the two neighbors marked the 50th anniversary of the normalization of diplomatic ties on Sept. 29.

During the war, Japanese troops carried out poison gas attacks in China at least 2,091 times, leaving more than 80,000 people dead or injured, according to a Chinese study. 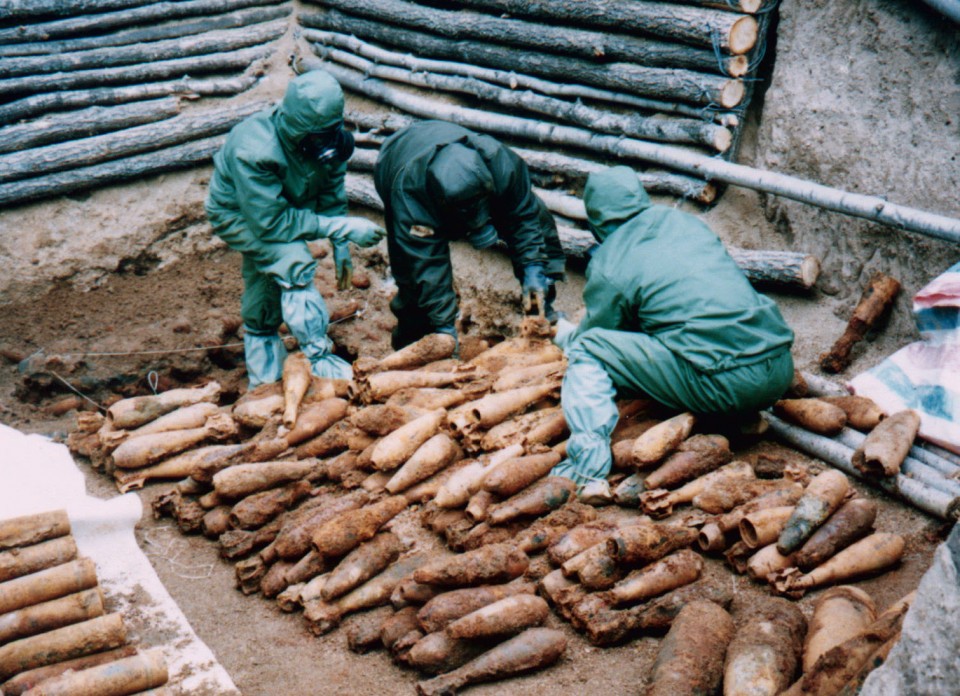 As the war dragged on, the Japanese army stepped up the building of poison gas weapons -- which it also regarded as important in preparation for war with the Soviet Union -- and stockpiled them in various locations in Japan.

But in the midst of confusion after Japan's surrender in World War II, army personnel abandoned and disposed of the weapons haphazardly, resulting in damage in both countries.

Zhong Jiang, 61, a resident of Mudanjiang, Heilongjiang Province, said his ordinary life "ended" after being exposed to poison gas made by the Japanese army.

In 1982, Zhong was left on the verge of death after being exposed to the Japanese army's mustard gas inside a steel container that a worker unearthed during a road expansion job he was supervising in the northeastern China city.

Zhong was unable to continue work because he was in and out of hospital. His wife left him, taking their daughter, and he suffers heavy aftereffects even today.

However, the Japanese government has not provided medical care for Zhong or any other victims in China.

More than 50 Chinese victims lodged a series of damages suits in Japan against the government. But they lost those cases because Japanese courts ultimately did not acknowledge the legal responsibility of the government.

Despite the cold response to the victims, the Japanese government, in cooperation with its Chinese counterpart, has contributed large funds for the disposal of abandoned poison gas weapons.

After the war, China gathered and buried an estimated 300,000 to 400,000 such weapons in Haerbaling in Jilin Province in the country's northeast.

U.S. military documents show the Japanese army manufactured more than 7,000 tons of poison gas at a factory it secretly built on Okunoshima Island in Hiroshima Prefecture, western Japan, in 1929.

The documents were discovered at the U.S. National Archives by Yoshiaki Yoshimi, a professor emeritus of modern Japanese history at Chuo University in Tokyo.

The army made a total of 7.39 million shells at a plant the army constructed in 1933 in Fukuoka Prefecture, southwestern Japan, and another 70,000 were manufactured at a factory the Imperial Japanese Navy ran in Kanagawa Prefecture, south of Tokyo.

Seeing it as the responsibility of the state in order to comply with the Chemical Weapons Convention, the Japanese government will speed up weapons disposals in Haerbaling and other areas in China, officials say.

In a sign of its determination, the government allocated a total of 384.7 billion yen ($2.7 billion) in the state budget for the project until March 2021.

But it is not immediately known when Japan will be able to complete the disposal of such weapons.

"We would like the Japanese government to set aside even a small portion of the budget to extend medical care for us," says a Chinese poison gas victim.

When the Allied powers tried Japanese leaders for war crimes at the International Military Tribunal for the Far East, they considered filing charges over the use of poison gas by the Japanese army.

But they eventually did not do so, and some believe this is because the United States sought to keep the option of using such gas after World War II.

Decades later, a change in Washington's weapons strategy and other factors led to the enforcement in 1997 of the convention, which bans development, manufacturing and possession of poison gas and other chemical weapons.

The convention also calls for total elimination of such weapons from the world.

While the Japanese government has not yet responded to calls for compensation, Japanese lawyers and others who assisted Chinese victims in filing damages suits launched in 2016 a nonprofit organization dedicated to supporting such people.

In cooperation with medical professionals, the NPO, called the Japan-China Cooperative Fund for Victims of Chemical Weapons, has been conducting medical checkups for Chinese poison gas sufferers and extending 1,000 yuan, or 20,000 yen, a year in aid for acquiring drugs. 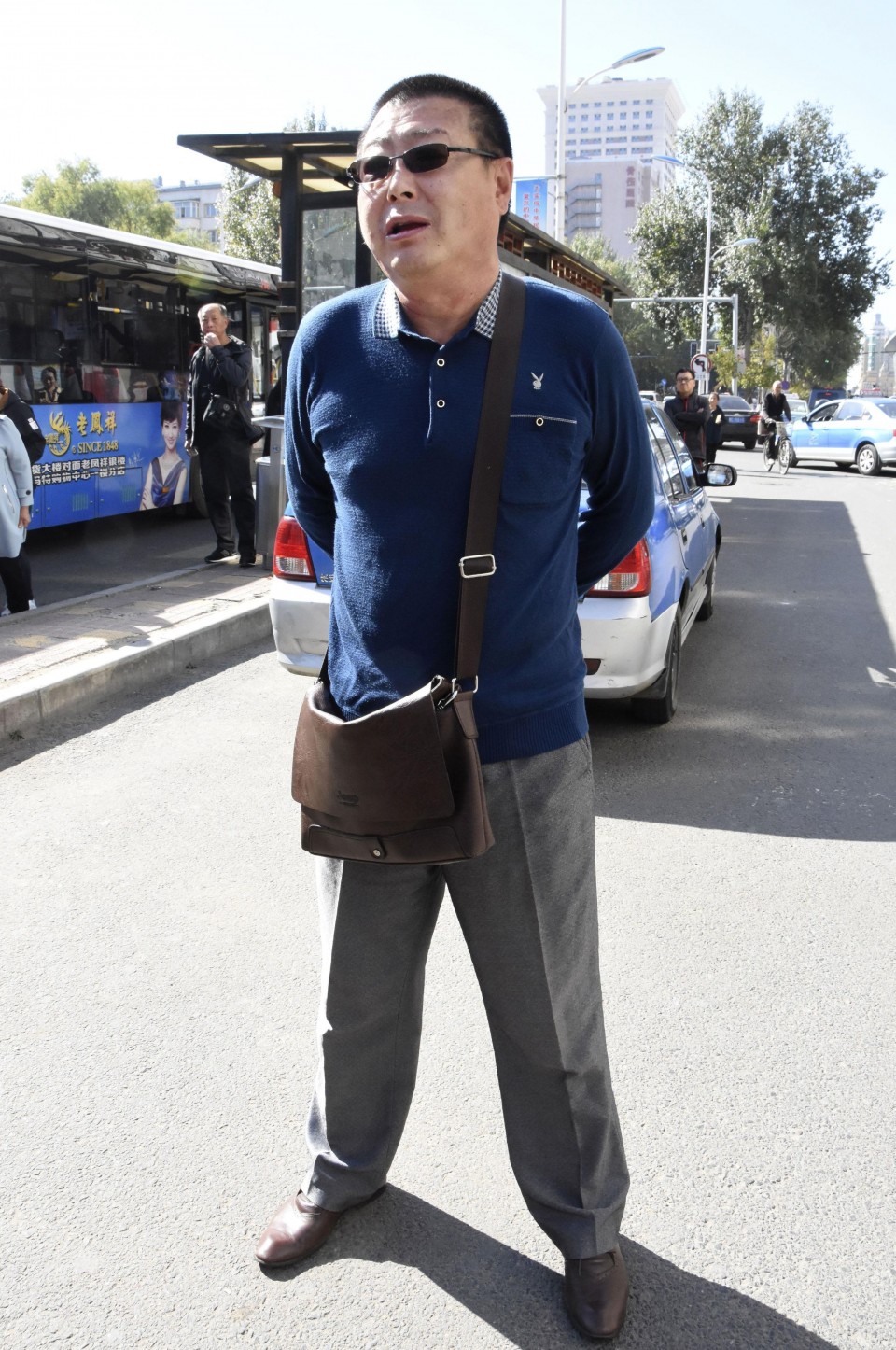 Zhong Jiang, a Chinese man who suffered exposure in 1982 to poison gas manufactured by the Imperial Japanese Army, recalls the accident at the site in Mudanjiang, Heilongjiang Province, northeast China in October 2018. (Kyodo)

The NPO is asking people in Japan and other countries for donations so as to expand assistance to Chinese victims.

Rina Aotsuka, 27, a Japanese victim of poison gas materials buried in Kamisu, east of Tokyo, says that when she was in elementary school, her family hosted at their home in the city in Ibaraki Prefecture a Chinese girl of around the same age who also suffered damage from the chemical agent.

Aotsuka has overcome health disorders and is now the mother of two children. But her brother Ryuji, 21, sustained a severe intellectual disability after drinking powdered milk dissolved in poison gas-tainted water from a nearby well.

That water, back in the early 2000s, was approved by local authorities as drinking water.

"A lawyer brought the Chinese girl to our home," Aotsuka recalls, saying she was encouraged by her exchanges with her. "We learned each other's language," she said.

Reiko Okada, who was mobilized during World War II to Okunoshima Island to manufacture bomb-bearing balloons, is urging Japanese people to raise their voices to prod lawmakers to support poison gas victims in Japan and China.

During the war, the Japanese developed incendiary balloon bombs as a means of conducting direct attacks against the U.S. mainland, launching over 9,000 of them from sites in Japan between November 1944 and April 1945. But they were largely ineffective, causing just six civilian deaths and minor damage in a single incident in Oregon.

Okada, 93, a former school teacher in Mihara, Hiroshima Prefecture, was a student when she was assigned to the island.

She joined rescue missions in Hiroshima city 12 days after the U.S. atomic bombing of the city.

Looking to the future, Okada says, "We would like citizens of Japan and China to get closer and step up calls for friendship and peace."