After years of staying away from school and grappling with social anxiety due to issues with ADHD, Shoichi Nakajima began to get recognition for his artistic creativity.

When his teacher Yutaka Konishi at the Kochi City Educational Research Institute praised him for a painting he did, a door opened up to his future as an artist. In high school, but still very much a loner due to his struggles with his developmental disorder, he found amusement in using his hands to process things. 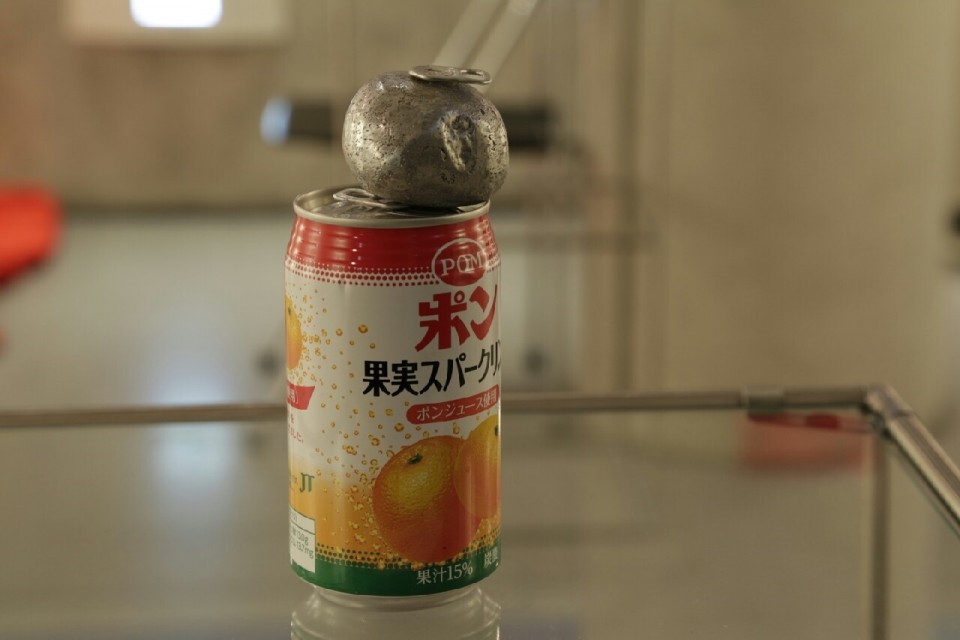 Shoichi Nakajima's work "a mikan on top of an aluminum can" won a prize at the Kochi Prefectural High School Art Exhibition. (Photo courtesy of Shoichi Nakajima)(Kyodo)

Like the time he brought home an electric fan from a garbage dump and punched holes in the blades to turn it into a machine that blows soap bubbles. Or when he went in search of a pliable tree in the riverbed near his high school to make an archery bow.

In his second year of high school, he made a mold of a "mikan," a type of mandarin orange popular in Japan, using plaster. He melted aluminum cans he had at home and poured the molten liquid into the mold to make an aluminum mikan.

He placed it atop a mikan juice can and called the piece "arumikan no ue ni aru mikan." It translates into English as "(there is) a mikan on top of an aluminum can," but in Japanese, it is a pun that plays on the fact that "aluminum can" (arumikan) and "there is a mikan" (aru mikan) sound the same. 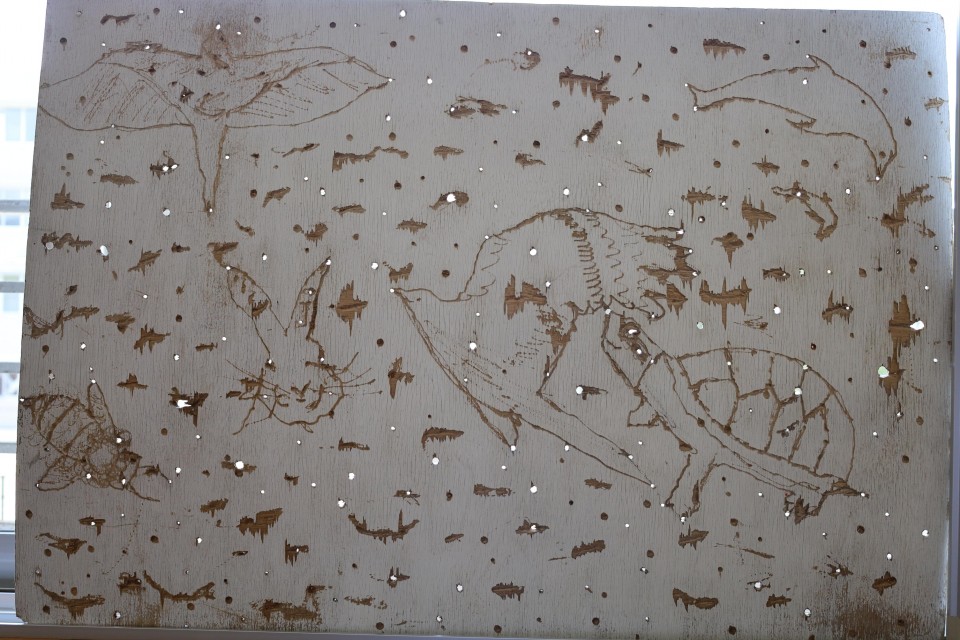 Shoichi Nakajima's "ceiling motif" in gratitude of his former teacher Yutaka Konishi is shown in photo taken on Aug. 9, 2022. (Kyodo)

The piece received a "Special Recognition Award" in the Kochi Prefecture High School Art Exhibition. "I was happy. For the first time, I was able to get recognition. My ideas 'are interesting' -- those are the words that my teacher (Konishi) at the research institute used."

Nakajima enrolled at the Osaka University of Arts. However, in 2013, when he was a freshman at the university, Konishi died of cancer. He was in shock, regretting that he could not see him before he passed away.

Learning that Konishi had posted photos of his hospital room ceiling on Facebook before he died, Nakajima created a work in a "ceiling motif" to express his gratitude to his former teacher for showing him his career path and had it displayed at the funeral hall.

He was required to do far fewer group activities at university, but his job hunt did not pan out. His parents demanded he work after graduation, and Nakajima knew "I only have art," while returning to Kochi jobless was not an option, he said.

It was right around this time that Nakajima started drawing a typeface that combined Arabic and Japanese writing. After graduating from college, by chance, he wrote the word "Kochi" in a similar typeface at home. When he saw the rounded pattern it formed, he intuitively thought, "It would be interesting to make a wallet using this (pattern)."

He immediately started making the wallets. He searched for a factory that would undertake the production in Japan but couldn't find one, so at first, he did them by hand. Eventually, he found a factory in China and produced 200 units. He tried selling them on the internet and other places, but none of them sold. During this setback, he recalled what his teacher Konishi had told him.

"Dreams come true if you say them 10 times." 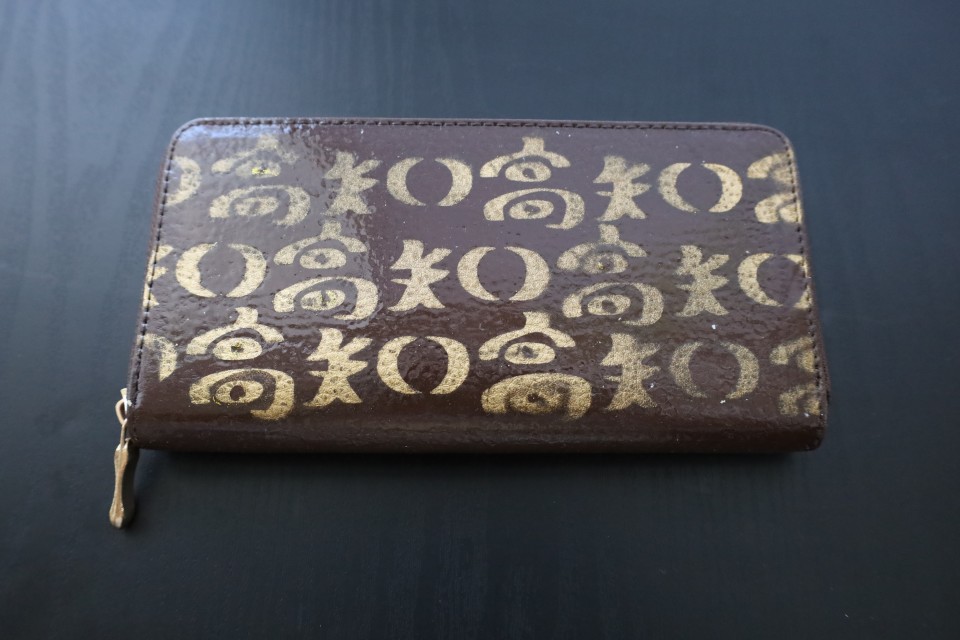 Nakajima's turning point came in August 2018. While trying to sell his wares in the corner of a department store he had rented in Kochi, Akira Ishida of the Japanese comedy duo "Non Style" came for a TV shoot. Nakajima was determined to give him a wallet during the taping and did so. Later, after Ishida posted a photo of the wallet on Twitter, orders for the wallets came pouring in.

He would sometimes get as many as 2,000 orders in a day. In the fall of the same year, he launched Brand Kochi and became the company's president.

Nakajima says he is forever grateful to his teacher Konishi and the support center in Kochi city. "They affirmed everything. I was able to change my weakness of thinking 'I can't do it" into a strength. They allowed me to change my way of thinking. They're irreplaceable."

Brand Kochi deals with products related to Kochi Prefecture. Other company products include skin lotions that use deep sea water and business card holders made of deer leather from the prefecture. "I love Kochi for providing a place like a support center. I want to return the favor. I am trying to create a company that lifts up Kochi, so many people come to like it," Nakajima said.

With the support of his mother, he continues to create products for Brand Kochi. And for people like himself who suffer from ADHD, Nakajima offers this sound advice: "Life doesn't end when you get off track. It might actually be your chance. There are so many worlds that make you shine." 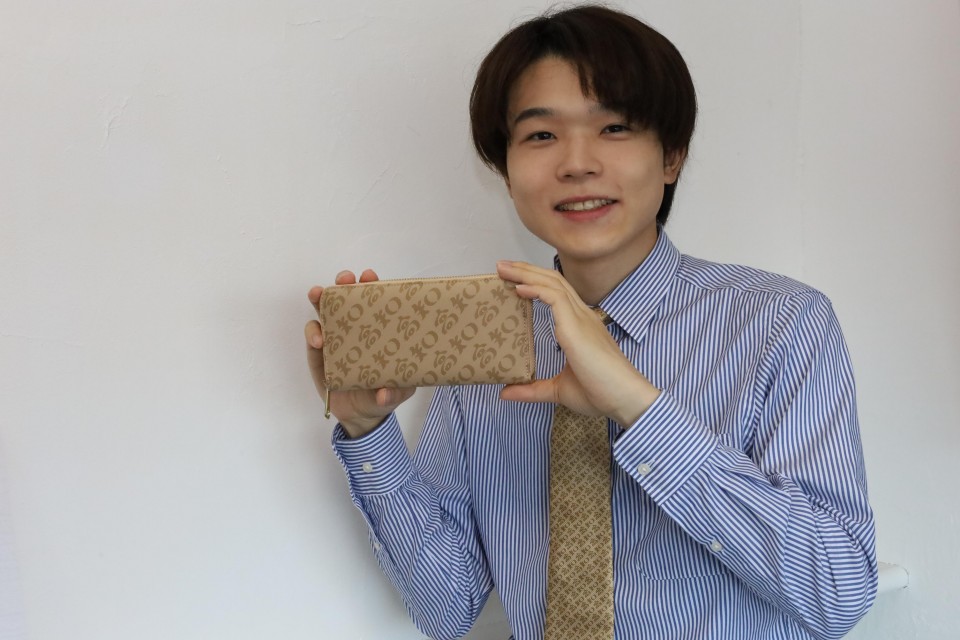 Shoichi Nakajima holds up one of the "Kochi" pattern wallets in photo taken on Sept. 7, 2022. (Kyodo)