China expressed "strong concerns" and lodged an unusual protest with Japan over its patrol vessels remaining in international waters in the Taiwan Strait in early September to avoid a typhoon, a source knowledgeable about the matter said Monday.

China told Japan that the coast guard patrol vessels "threatened China's security," the source said, adding it is believed to be the first protest of its kind from Beijing. 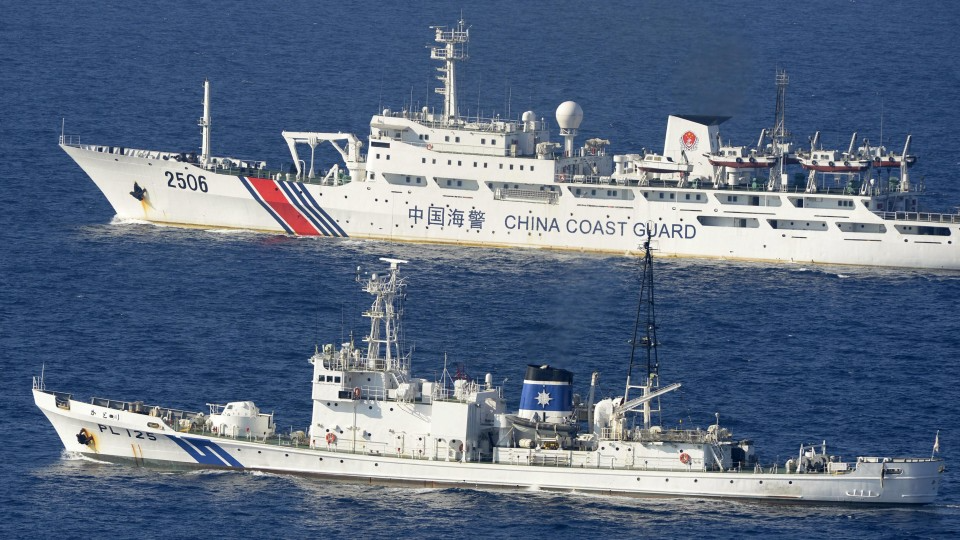 File photo taken in September 2013 shows a China Coast Guard vessel (back) and a Japan Coast Guard patrol vessel sailing in parallel in the contiguous zone near the Japan-controlled Senkaku Islands. (Kyodo)

Japan, however, did not accept the protest, the source said, pointing out the patrol vessels, which followed Chinese ships from near the Senkaku Islands, were in high seas where freedom of navigation is guaranteed under international maritime law.

It also said the patrol vessels had sent a signal at the time via the Automatic Identification System stating that evacuation to the area was aimed at avoiding powerful Typhoon Hinnamnor, according to the source.

Because of the approach of the season's 11th typhoon, the ships went back to mainland China and the patrol vessels returned to waters near the Japan-controlled uninhabited islets, claimed by Beijing, which calls them Diaoyu, following the storm's passage.

In August, China conducted large-scale military exercises around Taiwan following a visit by U.S. House Speaker Nancy Pelosi to the self-ruled democratic island, which Beijing views as a renegade province to be reunified with the mainland, by force if necessary.

In mid-September, Japanese patrol vessels similarly evacuated to the Taiwan Strait when the season's 12th typhoon approached, but China made no such protest then, according to the source.

As typhoons often have relatively weak winds on the west side of their path, the Taiwan Strait is a leading evacuation area for ships near the islets in the East China Sea.