Japan's Brave Blossoms showed their mettle but fell short on their drive after the final hooter on Saturday, having to settle for a 38-31 loss in their rugby test with New Zealand's All Blacks.

Trailing by four, Japan needed to go the length of the field after the hooter at Tokyo's National Stadium. But stiff defense by the visitors, reduced to 14 men, and a drive-ending penalty snuffed out any hopes of an upset.

The defeat was Japan's seventh in seven matches against New Zealand. 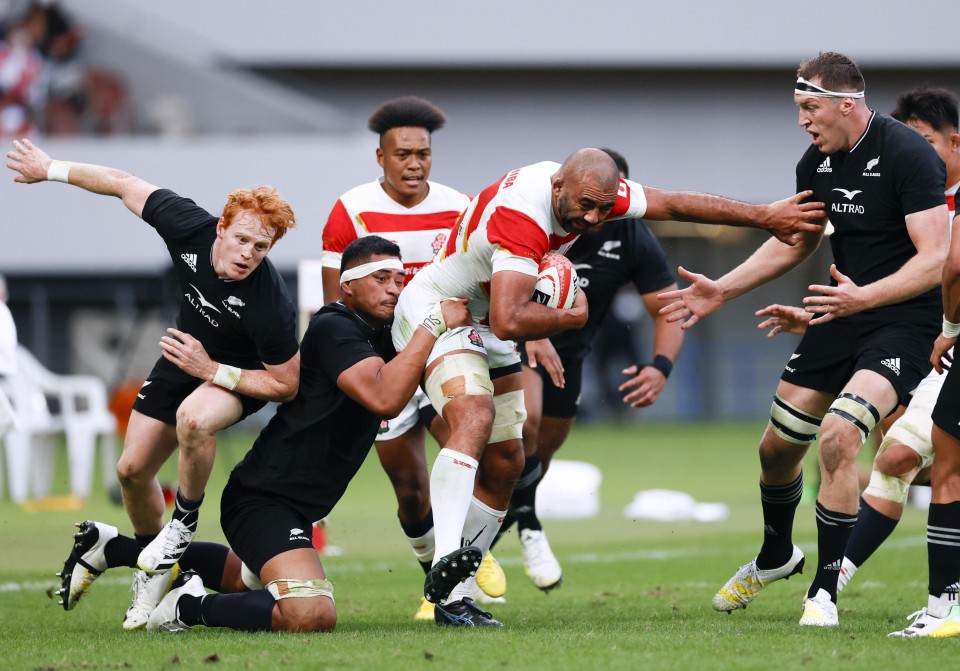 Michael Leitch (C) of Japan pulls away from a tackle during the first half of their rugby test match against New Zealand at Tokyo's National Stadium on Oct. 29, 2022. (Kyodo)

"We really wanted that (win)," Japan's former World Cup captain Michael Leitch said. "We just made too many subtle mistakes. And if you do that at this level, it's going to hold you back."

"Still, it's clear to see we are going in the right direction."

Time and again Japan were able to foil the All Blacks, who were missing a few key players, only for them to hand the visitors several second chances.

In a frantic opening 10 minutes, the All Blacks got pulled into Japan's unstructured game, and proved more than capable of handling the pace. 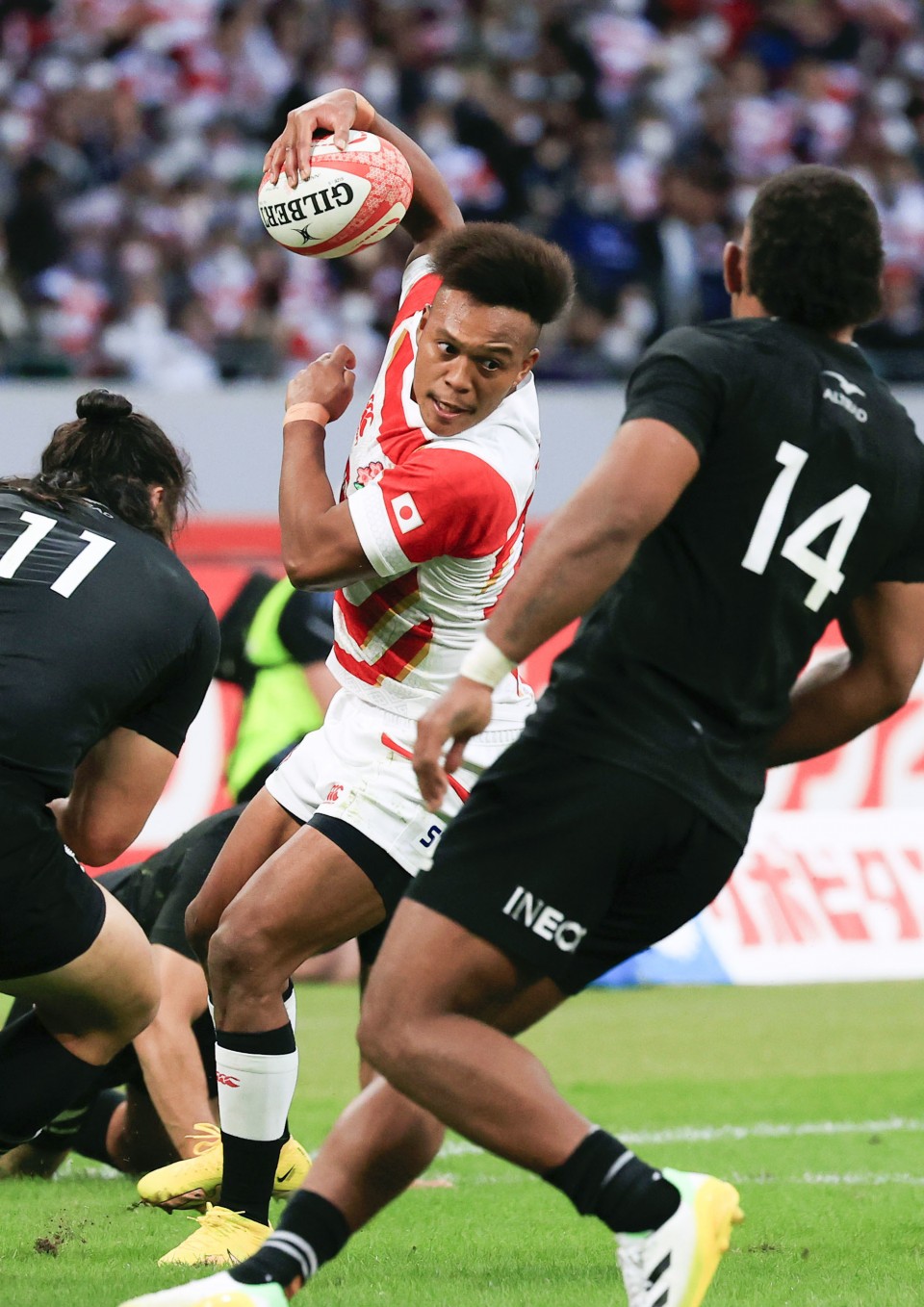 Kotaro Matsushima (C) of Japan is pictured in action during the second half of their rugby test match against New Zealand at Tokyo's National Stadium on Oct. 29, 2022. (Kyodo)

Samisoni Taukei'aho broke through after an inside pass and offloaded to Brodie Retallick, who crossed in the 11th minute.

Japan's pressure resulted in Takuya Yamasawa's 19th-minute penalty. An interval followed as the All Blacks were repeatedly stopped, only to be the benefactors of Japan's indiscipline.

Brayden Ennor, prevented from scoring off a kick pass in the 22nd minute when Kotaro Matsushima kept him from grounding in the try area, scored four minutes later, with Richie Mo'unga kicking his second conversion.

Some trickery set up New Zealand's third try with Sevu Reece blasting through the Brave Blossoms' defense after getting the ball from a long lineout that completely fooled the hosts. 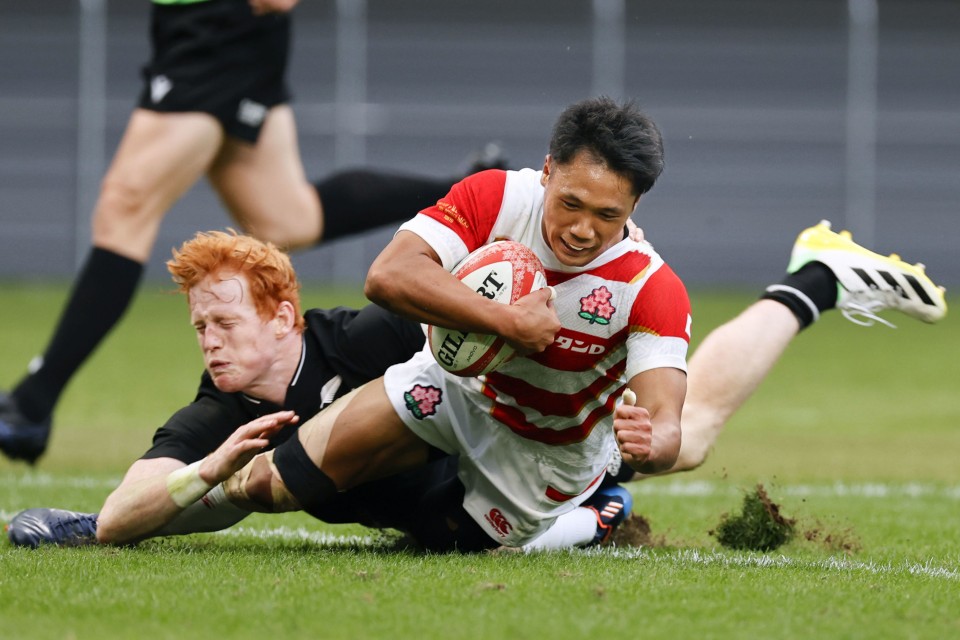 Takuya Yamasawa scores a try for Japan in the first half of their rugby test match against New Zealand at Tokyo's National Stadium on Oct. 29, 2022. (Kyodo)

Trailing 21-3, Japan created a turnover in their own half, and after a New Zealand defender failed to collect a grubber kick, Yamasawa fly hacked it forward, scooped up the ball, crossed in the 37th minute and added the extras.

Dylan Riley set up Japan's second try moments later, hauling in a poor pass that headed into touch, before sprinting past defenders and offloading to Yutaka Nagare, who scored. Yamasawa converted to cut the halftime deficit to four. 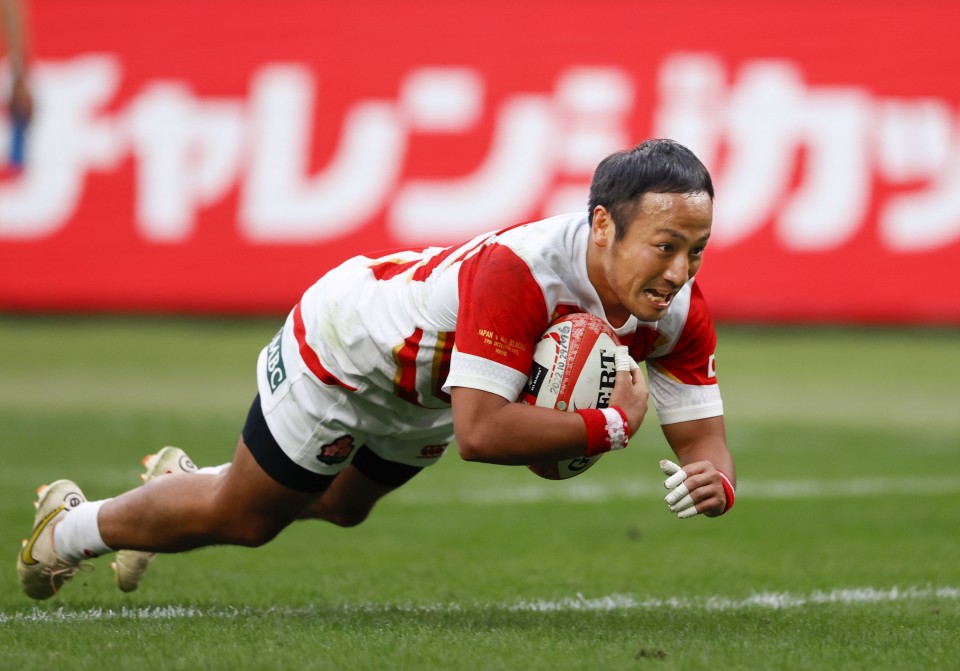 Yutaka Nagare scores a try for Japan in the first half of their rugby test match against New Zealand at Tokyo's National Stadium on Oct. 29, 2022. (Kyodo)

Instead of wilting, the Brave Blossoms turned up the energy a notch through Kazuki Himeno, Warner Deans and substitute Gerhard Van Den Heever.

Japan twice weathered two sustained assaults on their try line, with Himeno halting the second by stealing the ball from a tackle. Moments later, Warner Deans crossed in the 56th minute after recovering the ball from a kick he charged down. Lee Seung Sin's conversion made it 28-24. 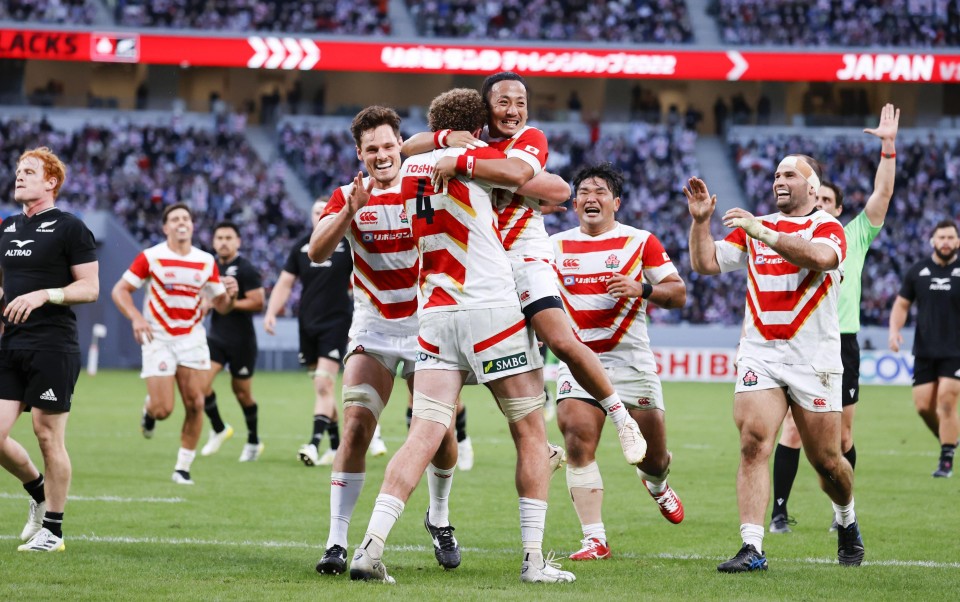 Warner Deans (4) gets a hug from Japan teammate Yutaka Nagare after scoring a try in the second half of a rugby test match against New Zealand at Tokyo's National Stadium on Oct. 29, 2022. (Kyodo)

The All Blacks' pack responded quickly with a series of powerful surges at the try line that allowed No. 8 Hoskins Sotutu to find space and cross after spinning out of a tackle.

Retallick was sent off in the 66th minute for diving into a ruck and striking Himeno's head with his shoulder. Japan tried a long line out of their own, but the All Blacks defended it well and contained a couple of dangerous runs by Matsushima down the touchline.

Van Den Heever, however, maintained Japan's momentum with some dynamic play down the left. He set up Japan's fourth try by forcing a turnover with a tackle off his own grubber kick.

Himeno then stepped up again. A good run brought the ball to the try line, from where he took it straight out of the ruck and went over in the 79th minute.

When Japan's attempt to win with a final drive failed, Mo'unga added to his five conversions with a penalty goal to end the game, the first of Japan's three autumn tests that will conclude in Europe against England and France.

"This hurts. This was a game we could have won," Himeno said. "We have two tests remaining and I think this result can lead to something good."

Rugby: Over 65,000 tickets sold for All Blacks match vs. Japan