Japan forward Kyogo Furuhashi set up the equalizer but Celtic remained without a win in the Champions League Group F after losing 3-1 away to Leipzig on Wednesday.

In a quick counter, Japan teammate Reo Hatate sent a first-time pass to Furuhashi from the middle of the pitch before the forward unselfishly laid the ball off to Jota to slot home two minutes after the break at RB Arena. 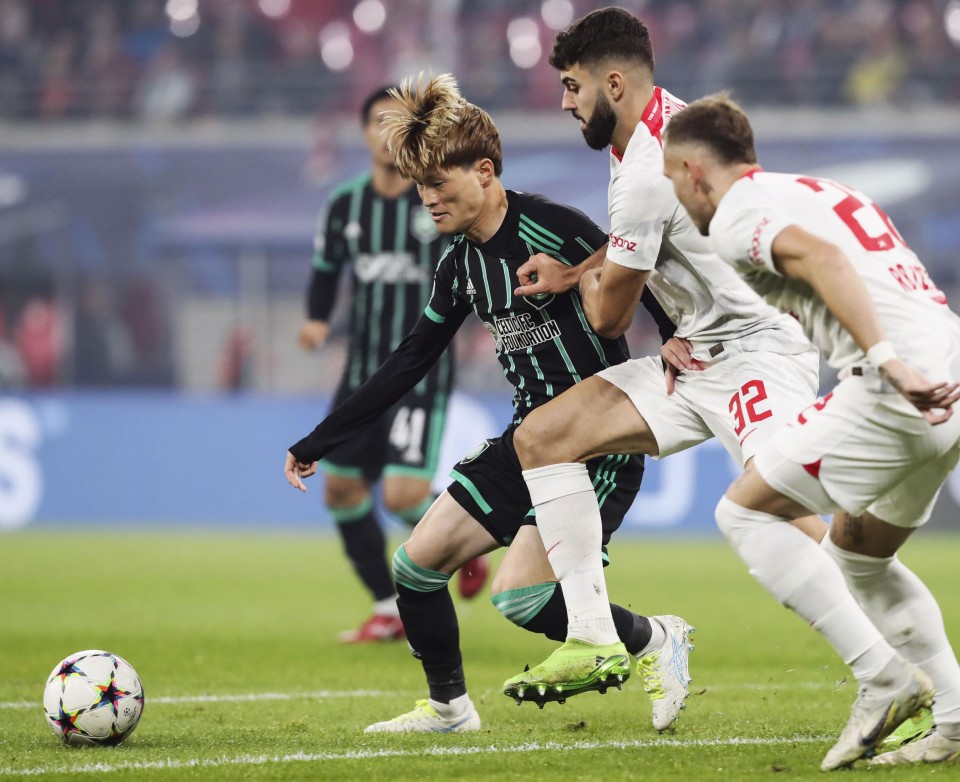 Kyogo Furuhashi (L) of Celtic vies for the ball during a Champions League game against Leipzig in Leipzig, Germany, on Oct. 5, 2022. (Kyodo)

But a horrific pass from keeper Joe Hart led to Andre Silva scoring in the 64th-minute, with the Portuguese adding a second 13 minutes later following a fine delivery from the right by Mohamed Simakan.

Christopher Nkunku had earlier squeezed in the 27th-minute opener for Leipzig after Celtic lost possession deep in the opposition half.

Furuhashi, starting in the middle of the three-man attack alongside Jota and another Japan teammate Daizen Maeda, went close twice with headers and another with a strike in the first half but remains without a goal in the tournament.

"I drew defenders as much as possible before giving the pass," Furuhashi said of his assist. "(But) I need to contribute with goals. I want to get tougher on myself."

Celtic are bottom of their group with one point following a draw and two defeats, with Leipzig third on three points following their first win.

Real Madrid are top on nine points after the reigning champions held off Shakhtar Donetsk 2-1 for their third straight win. The Ukrainian side are second on four points.