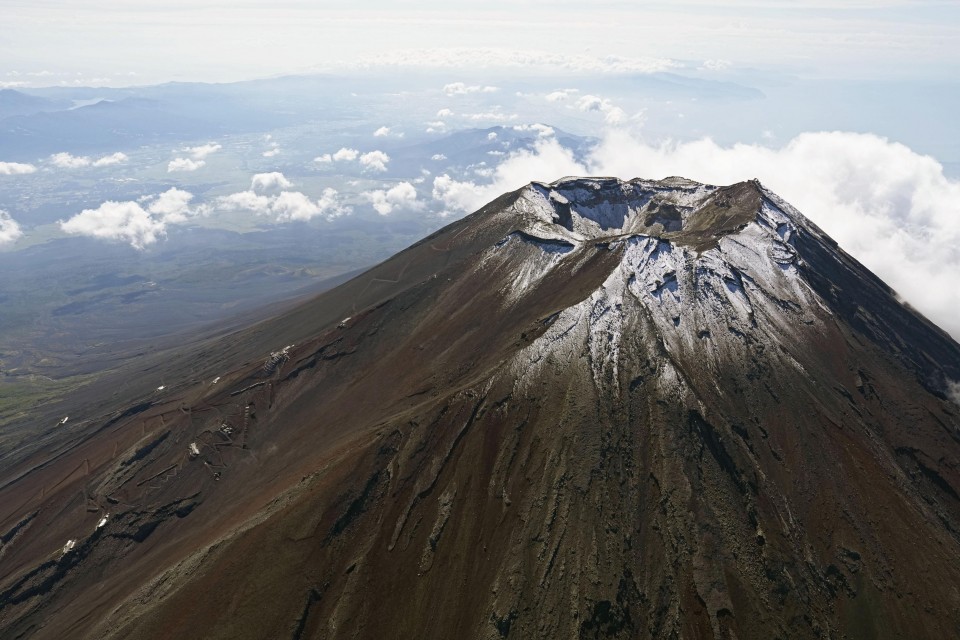 Photo taken from a Kyodo News helicopter on Sept. 30, 2022 shows the first snow of the season spotted on the peak of Mt. Fuji, the iconic mountain of Japan on the borders of Shizuoka and Yamanashi prefectures. (Kyodo) ==Kyodo

In a policy speech marking the start of an extraordinary parliamentary session, Kishida also said the government will make use of the benefit of the Japanese yen's rapid depreciation while vowing to continue easing the country's coronavirus border controls.

TOKYO - Japan is ready to respond "resolutely" to volatile yen movements, Finance Minister Shunichi Suzuki warned Monday, but the currency weakened to breach the key 145 mark versus the U.S. dollar, a level unseen since the country's market intervention in late September.

Japan's record 2.84 trillion yen ($19 billion) intervention to support the yen on Sept. 22 served as "a warning" to speculators who were behind the currency's recent rapid, one-sided movements, Suzuki said, adding the government is watching developments "with a sense of heightened vigilance."

TOKYO - Japan is planning to reopen its embassy in Kyiv as early as by the end of October, more than seven months after a temporary closure following Russia's invasion of Ukraine in February, diplomatic sources said Monday.

As other Group of Seven industrialized countries have already resumed diplomatic operations in Ukraine, Japan is set to finalize the decision in light of the improved security situation in the Ukrainian capital, according to the sources.

STOCKHOLM - Swedish researcher Svante Paabo won the Nobel Prize in Physiology or Medicine on Monday for his discoveries concerning the genomes of extinct hominins and human evolution.

Paabo, director at the Max Planck Institute for Evolutionary Anthropology in Germany, achieved a "seemingly impossible" feat when he sequenced the genome of the Neanderthal, an extinct relative of present-day humans, the Nobel Assembly at the Karolinska Institute said in a statement.

TOKYO - China expressed "strong concerns" and lodged an unusual protest with Japan over its patrol vessels remaining in international waters in the Taiwan Strait in early September to avoid a typhoon, a source knowledgeable about the matter said Monday.

China told Japan that the coast guard patrol vessels "threatened China's security," the source said, adding it is believed to be the first protest of its kind from Beijing.

Airdo, headquartered in Sapporo on the northernmost main island of Hokkaido, and Solaseed Air, based in Miyazaki on the southwestern island of Kyushu, will retain their names and current routes under a new holding company, RegionalPlus Wings Corp.

MANILA - Japan and South Korea participated as "observers" in this year's military exercise between the United States and the Philippines that started Monday for an 11-day run.

The drill was taking place with simmering tensions between the Philippines and China in the South China Sea, between the United States and China over Taiwan, and North Korea's test firings of ballistic missiles.

TOKYO - Emperor Naruhito will undergo a prostate examination after seeing a rise in the level of a tumor marker, the Imperial Household Agency said Monday.

The 62-year-old is expected to take an MRI scan in early November, the agency said.