The first attempt in Japan to matchmake African bush elephant pairs by moving females between two separate zoos has failed, with a male elephant's death and unfavorable conditions dashing efforts to breed the endangered species.

As African elephants are on the International Union for Conservation of Nature's red list of endangered animals, importing them is not realistic, increasing the likelihood that once the current zoo residents die, the Japanese public will not have the opportunity to see the species again.

Poaching for their ivory and habitat loss due to deforestation is blamed for putting the animals' survival in danger.

Japan has a patchy record on ivory trading, with the nation still allowing it domestically, despite many countries outright banning it. The 1990 Washington Convention ended the official international trade of ivory though a black market still exists.

"In Japan, African elephants will become animals that can only be viewed in books," one zoo official said. 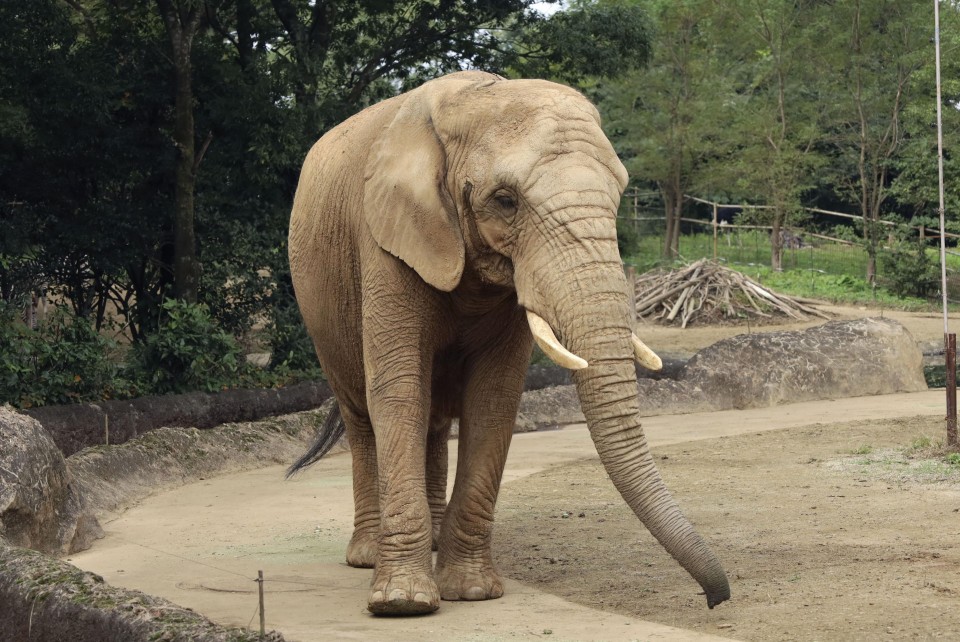 Photo taken in October 2022 shows African elephant Hanako, who was moved from the Akita Omoriyama Zoo in the city of Akita to the Yagiyama Zoological Park in Sendai, Miyagi Prefecture, for a breeding project. (Kyodo)

The breeding program started in the autumn of 2018 with the arrival of Lily, a female African elephant, to the Akita Omoriyama Zoo in the city of Akita. She was moved from the Yagiyama Zoological Park in Sendai, Miyagi Prefecture. Another female, Hanako, went the other way.

Lily was expected to mate with Daisuke, a bull in Akita, but he died in March 2021. The three elephants were 29 years old at the time of the switch.

Morioka Zoological Park in Iwate Prefecture has a young female elephant named Mao that was initially considered as part of the arrangement but did not participate. Taro, a bull at the Iwate zoo, died in November 2018 after the agreement had been reached.

"The remaining time for breeding is short when elephants enter their 30s. We badly wanted to do something," said Masaya Miura, 50, of Omoriyama, recalling the project launch.

Neither Lilly nor Hanako was ovulating, and it was a success just to get them back to the point where they were producing eggs. But the situation remains unchanged, and both, now aged 33, are awaiting return to their original zoos. Back in Akita, Hanako will be alone.

In 1984, there were 84 African elephants at zoos belonging to the Japan Association of Zoos and Aquariums, according to JAZA. As of July, 12 zoos housed 23 elephants, including only four males. Rough by nature, the bulls are challenging to raise in captivity and have shorter lifespans, while the females are more docile and live longer.

Typically found in sub-Saharan Africa, the African bush elephant is the largest land mammal on Earth. They live in herds in savanna grasslands and forests. Experts say that because zoo environments are entirely different from their natural habitat, it is tough for the elephants to acquire the necessary social skills to breed. The 22-month gestation period of a female also creates challenges.

There have been nine successful births of the elephant calves in Japan. The first was in 1986 at the Gunma Safari Park in Tomioka, Gunma Prefecture, and the last was in 2013 at the Tobe Zoological Park in Tobe, Ehime Prefecture.

"We didn't try to tame a rough-tempered bull but let him grow freely so that he was encouraged to rut," said Osamu Shiina, 60, of the Tobe zoo. Rutting is the period in which male elephants become aggressive due to their heightened drive to breed.

"The bull also had good chemistry with his partner," he added.

It is possible to reproduce the characteristics of a herd by breeding multiple animals, but it is difficult due to space and budget restrictions.

The elephant that sired a calf at the Tobe zoo died in 2016. His son currently lives at another zoo on a "breeding loan."

According to Waka Otozu, 46, of Oshima Park Zoo in Tokyo, who oversees elephant breeding at JAZA, specialized software forecast that there will be no more African elephants in Japan in 20 years.