The Japanese government should scrap distinctions between "mandatory" and "voluntary" evacuees from the 2011 Fukushima nuclear disaster and take a rights-based approach to ongoing support for those still displaced by its effects, a U.N. human rights expert said Friday.

Cecilia Jimenez-Damary, the U.N. special rapporteur on the human rights of internally displaced persons, made the calls as the government and Tokyo Electric Power Company Holdings Inc., the operator of the crippled Fukushima nuclear power plant, have been exposed to numerous lawsuits from voluntary evacuees and those who returned to their former communities.

The distinctions have had "particularly severe impacts on those in poverty, those with no livelihoods, the elderly and persons with disabilities," Jimenez-Damary said at a press conference to announce the preliminary findings from her Sept. 26 to Oct. 7 official visit to Japan. 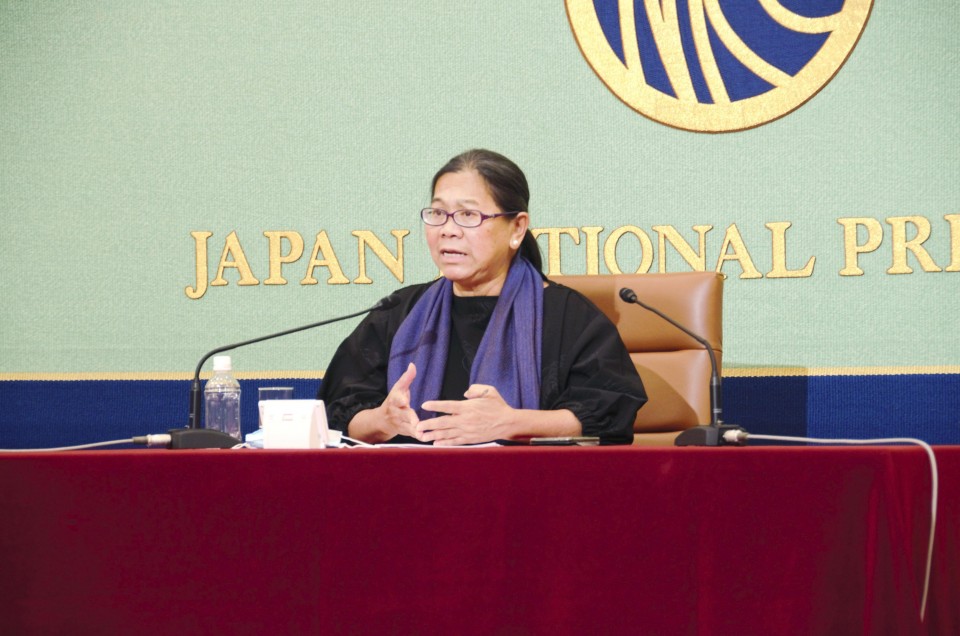 Cecilia Jimenez-Damary, the U.N. special rapporteur on the human rights of internally displaced persons, delivers her preliminary remarks at the end of her visit to Japan to assess conditions for people displaced after the Fukushima 2011 nuclear disaster, at the Japan National Press Club in Tokyo on Oct. 7, 2022. (Kyodo)

Japan distinguishes between evacuees depending on whether they are registered as residents in areas subject to evacuation directives due to being uninhabitable and people who chose to leave over radiation concerns.

Individuals from outside the specified zones and relocated following the disaster became ineligible for Fukushima prefectural government support from March 2017, a decision that met with protest.

A human rights lawyer with decades of experience, Jimenez-Damary told reporters that a desire to return did not define evacuees and described conversations she had with displaced people on her visit to Japan and elsewhere, saying, "When I ask if they want to return, they say yes, but when I ask can you return, they say we cannot."

Since the disaster, the government has raised the safe annual limit of radiation exposure from 1 millisievert per year to 20, an amount said to especially present risks to vulnerable people, such as children and women of reproductive age.

In 2018, the United Nation's then special rapporteur on hazardous substances, Baskut Tuncak, said it was "disappointing" that Japan had not returned the levels to what they consider acceptable despite recommendations by the organization in 2017. Jimenez-Damary renewed calls for its review in her preliminary statement.

Data from the Reconstruction Agency states that as of Aug. 1, around 32,000 internally displaced people are living in 878 municipalities across Japan's 47 prefectures, down 2,841 people from the totals recorded on April 8 this year. At its peak, around 470,000 were displaced in the wake of the disaster.

Jimenez-Damary said the issue "needs to be resolved because it is not clear how many are in evacuation" when asked whether the government's estimate of the number of internally displaced people reflects the reality. The human rights expert added that she is "definitely recommending" that evacuees be heard by the government.

The findings from Jimenez-Damary's visit to Japan, which brought her into contact with governments, support organizations and displaced people, will be presented to the U.N. Human Rights Council in Geneva in June 2023.