North Korean state-run media made no mention on Wednesday morning of the previous day's firing of a ballistic missile over the Japanese archipelago, following similar instances of silence on a string of missile launches earlier this year.

North Korea on Tuesday fired a ballistic missile over the Japanese archipelago for the first time in five years, with the projectile reaching the longest distance ever for a missile launched by Pyongyang, the Japanese government said. 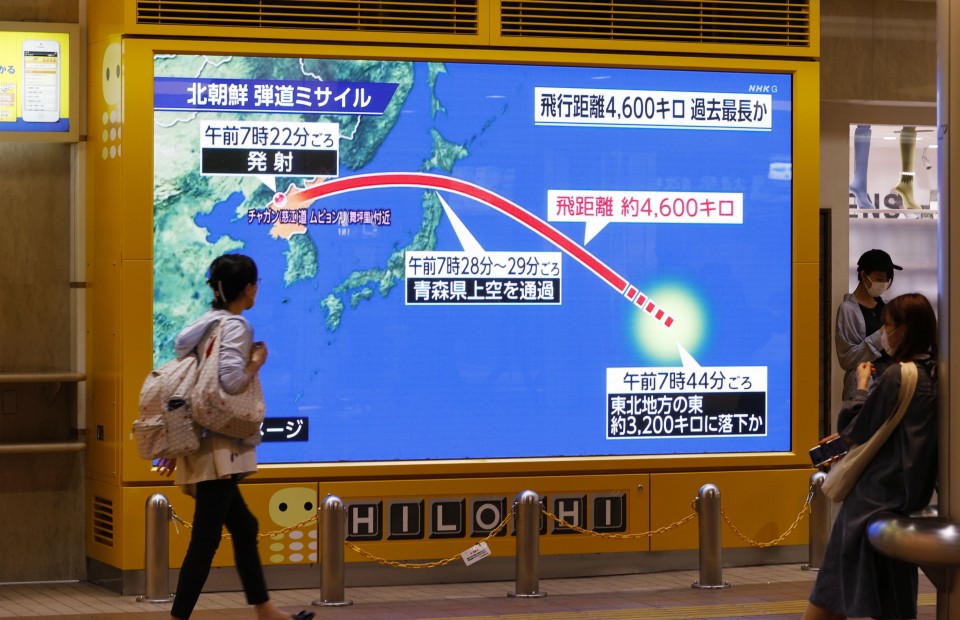 A roadside screen in Sapporo in Hokkaido, on Oct. 4, 2022, shows a news report on North Korea's launch of a ballistic missile over the Japanese archipelago for the first time in five years. (Kyodo) ==Kyodo

North Korean leader Kim Jong Un pledged in September that the country will never give up its nuclear weapons, asserting that the United States is aiming to bring about the collapse of the Pyongyang regime, state-run media reported.

Tuesday's missile flew 4,600 kilometers -- putting the U.S. territory of Guam, where key military bases are located, within reach. Previous launches of North Korean missiles were fired on steep or "lofted" trajectories to test capabilities and fell in waters closer to the nation.

Observers say by heightening tensions, Pyongyang is eager to bring the administration of U.S. President Joe Biden to the negotiating table on denuclearization of the Asian country to discuss provision of security guarantees to the North.