Japan and China recently marked the 50th anniversary of the normalization of diplomatic relations, but traces of around 7.46 million poison gas weapons produced mainly during their war from 1937 to 1945 remain in both countries.

Some of the weapons abandoned or disposed of at the end of the Sino-Japanese War are still taking a toll on lives and livelihoods.

"I got sick because of the water. I want to die," Ryuji Aotsuka, 21, a resident of Kamisu located about 100 kilometers east of Tokyo, screamed while holding a knife at his home in September 2021.

When a police officer arrived after a call was received, Aotsuka was being held down by his mother Miyuki.

The 45-year-old mother said such outbursts occurred frequently, revealing the reality of his condition.

Ryuji Aotsuka was born in September 2001 to Miyuki and Shinichi, 50. The following month, the family moved to a rented house in the Kisaki district of the city in Ibaraki Prefecture.

Immediately after moving to their new home, about 30 minutes by car from Kashima Soccer Stadium, the family began to experience physical changes.

In March 2003, arsenic 450 times higher than the acceptable level was detected in the well water they were drinking.

Analysis later revealed that the substance was diphenylarsinic acid, which does not exist in nature.

The Environmental Dispute Coordination Commission determined the substance, which can cause vomiting, must have come from a poison gas weapon of the Imperial Japanese Army as there was no evidence of it having been manufactured after World War II.

In the surrounding area, residents had been complaining of deteriorating health since the late 1990s. As there was nothing strange about the taste or smell of the well water, the investigation did not progress as quickly as it should have, leaving roughly 150 people in and around the residential district affected. 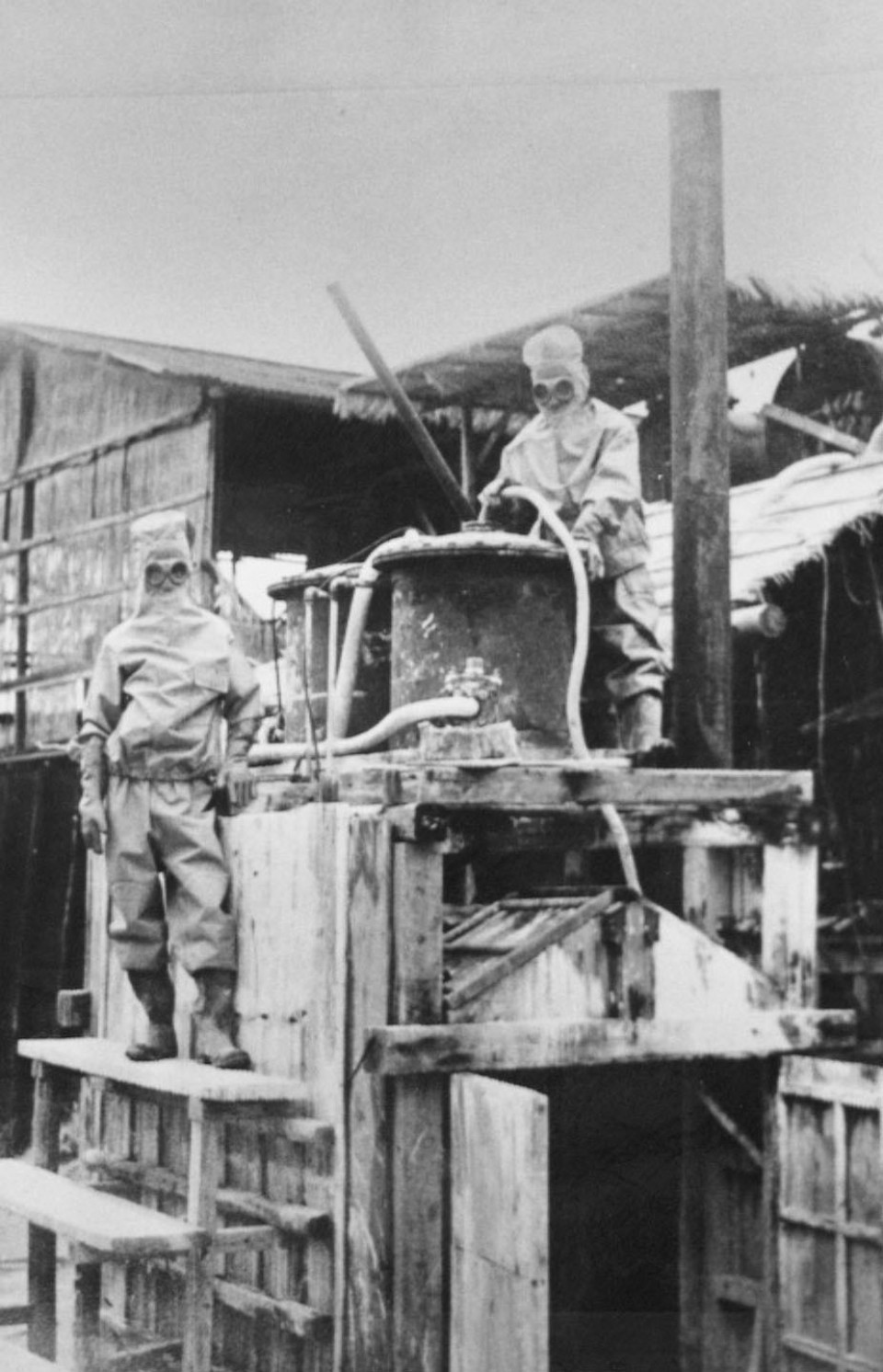 The substance had been buried in concrete in a vacant lot about 90 meters from the Aotsukas' house and may have leaked into groundwater and entered the well. A can found at the site, marked as produced in 1993, indicates that the burial did not take place before then.

"I may never walk again," Ryuji Aotsuka used to say when he was younger.

After he was born, he drank milk diluted with water from the well. His symptoms were particularly severe among those suffering violent convulsions.

When he was hospitalized at the age of six months, doctors believed he would have difficulty walking.

After the cause of his condition was discovered and the family stopped using the water, he was able to walk but was left seriously disabled.

In the spring of 2020, he graduated from a local high school for students with special needs. He was later found to have scoliosis, an abnormal curvature of the spine, and facial paralysis prevented him from eating.

That was around the time he picked up the knife and cried out, "I want to die."

"He also broke through the screen door on the second floor and jumped off the balcony," Miyuki Aotsuka said. "I thought about killing ourselves in the sea off Kashima many times."

In October 2021, Ryuji Aotsuka underwent successful surgery to strengthen his spine with a special device and his condition improved, but he still has episodes of uncontrollable panic.

His mother does not hide her anger, saying, "If only there had been no war, we wouldn't have had to go through this." 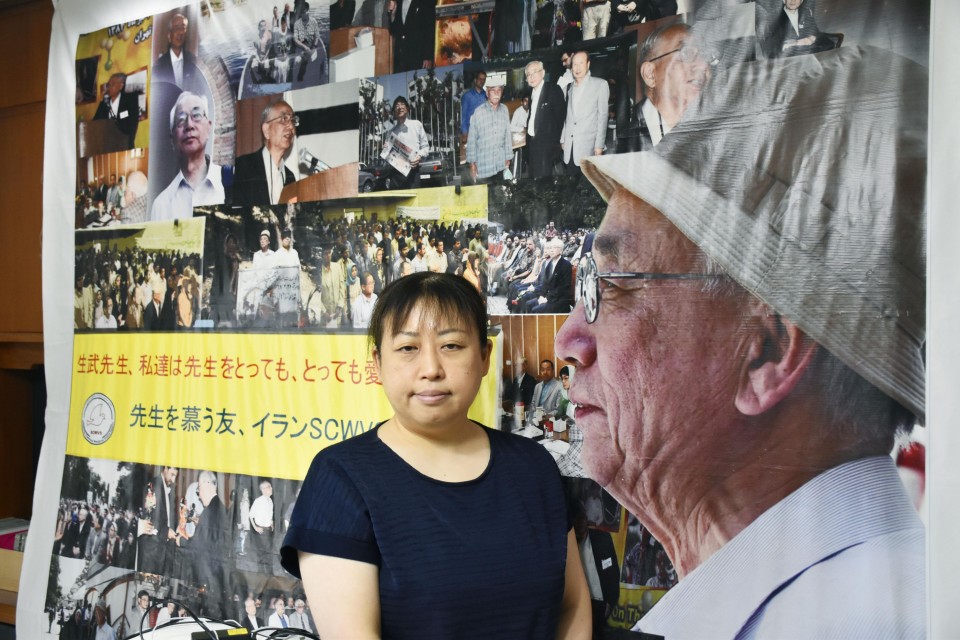 Late doctor Masato Yukutake's eldest daughter Noriko stands in front of a panel of photos of him at her home in Mihara, Hiroshima Prefecture, on Aug. 3, 2022. (Kyodo)

Masato Yukutake, a former hospital head, said more than a decade ago that "Kamisu's poison gas may have come from Okunoshima Island."

The tiny island in the Seto Inland Sea off Takehara, Hiroshima Prefecture, is a popular tourist destination known for being the home of hundreds of bunnies, but it was once a "poison gas island" where the Imperial Japanese Army secretly manufactured chemical weapons from around 1930 to the end of the war.

Japan operated a secret factory on Okunoshima, after the use of poison gas weapons was prohibited under international law in 1925.

With Japan's defeat in the war in 1945, the military's top brass, fearing war crimes charges, kept silent and burned all related documents.

The island's history was nearly buried, but since the 1980s declassified U.S. military documents and materials from the former Japanese military have come to light.

It is thought that 2.66 million poison gas weapons employing diphenylarsinic acid were manufactured on the island and about 6,800 former Okunoshima factory workers were left with cancer, respiratory diseases and other conditions. 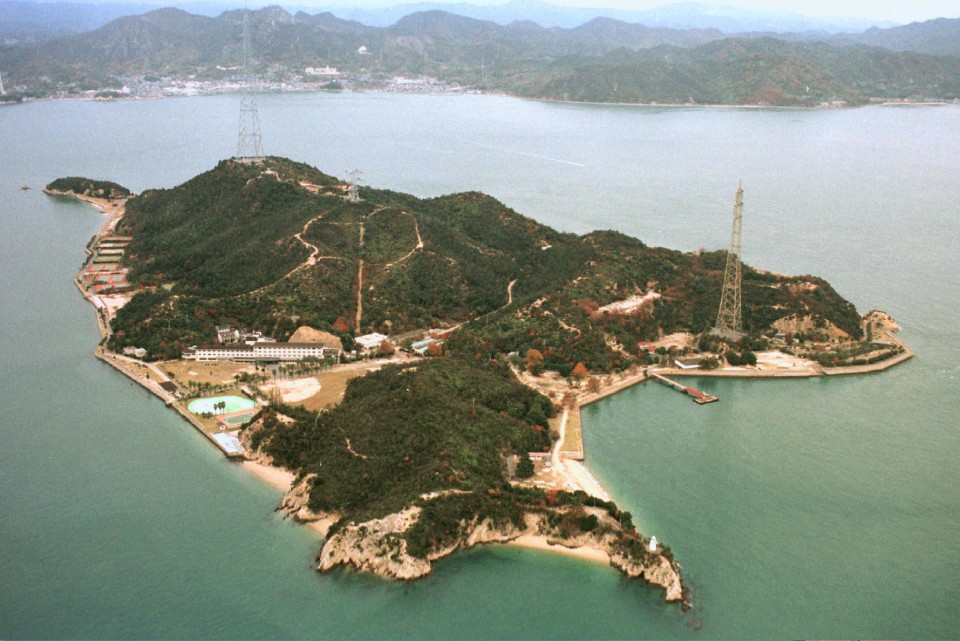 Yukutake, who died in 2009, served as head of Tadanoumi Hospital and examined around 4,000 of the workers.

He used to recall that for a long time the corridors of the hospital, now called the Tadanoumi branch of Kure Kyosai Hospital, were packed with former workers with darkened skin who used to cough violently.

"When seeing the former factory workers, my father used to write down in the margins of medical records the details of their work and labor conditions as told to him," said Yukutake's eldest daughter Noriko, who lives in Mihara in the prefecture.

Why the chemical agent was buried in Kamisu has not yet been clarified by government investigations. Some believe that during the chaotic years following the war, the substance was sold and eventually transported to the city.

As military officials continued to maintain a silence, the late doctor compiled his notes from medical records into a book.

The daughter, who helped her father edit the book, said his work treating those sickened by the poison gas spurred him to travel to Iran to provide medical support to victims of the Iraqi army's chemical weapons attacks during the war between the countries in the 1980s.

"We must break the chain of destruction," she said.