The Orix Buffaloes won their second consecutive Pacific League championship on the final day of the league's regular season Sunday.

The Buffaloes' 5-2 win over the Rakuten Eagles, coupled with the SoftBank Hawks' 5-3 loss to the Lotte Marines, left the Buffaloes and the Hawks at the same 76-65 win-loss record with two ties each, but the Buffaloes clinched the title by virtue of a 15-10 head-to-head record against the Hawks.

Orix won its first back-to-back league titles since the then Orix BlueWave won in 1995-96 with Ichiro Suzuki.

The Buffaloes turned a 2-0 deficit into a 3-2 lead in the fifth inning when Shuhei Fukuda followed a Torai Fushimi RBI single with a two-run single off former New York Yankees ace Masahiro Tanaka (9-12). 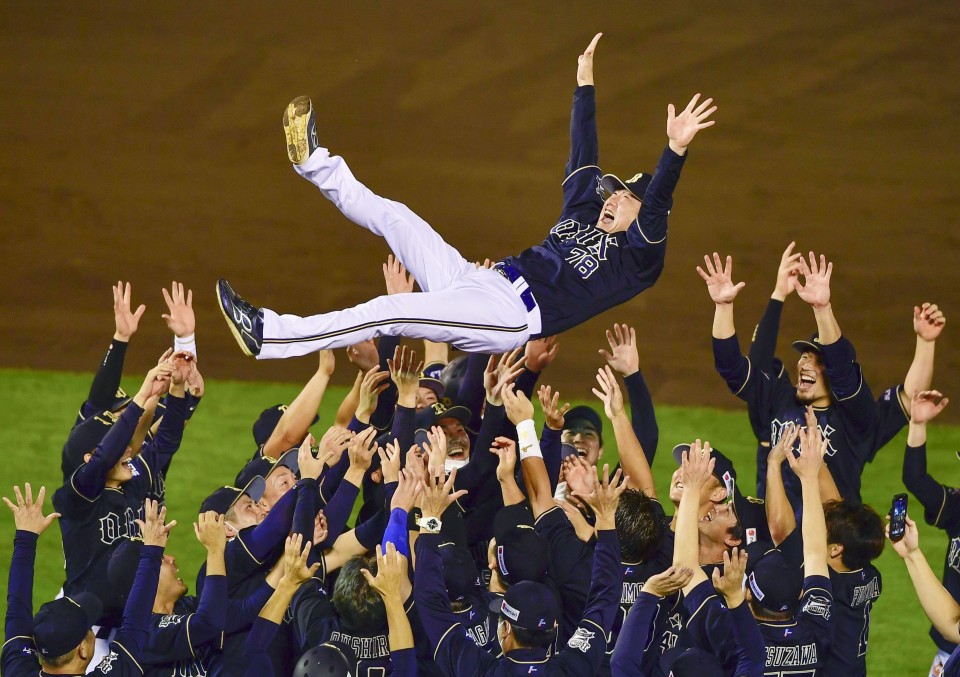 After the Orix bullpen held on to the one-run lead, Fushimi doubled in two much-needed insurance runs in the ninth at Rakuten Seimei Park Miyagi.

"This is unbelievable," Buffaloes manager Satoshi Nakajima said of the team's come-from-behind victory on the final day. "None of our players was ready to give up (after trailing 2-0), so I believed we would turn the game around."

"I'm proud of my players for getting through this tough season," he added.

Yuki Udagawa (2-1) won in relief. Shota Abe picked up his third save.

At Zozo Marine Stadium, the Hawks blew an early 2-0 lead when reliever Keisuke Izumi gave up a three-run homer to Koki Yamaguchi in the sixth inning.

The Hawks had entered the day with a one-game lead over the Buffaloes.

In the Central League, the Yakult Swallows and the Hanshin Tigers played out a 3-3, 12-inning tie. Yakult's Munetaka Murakami stayed at 55 home runs as he sat out the game after going a season-worst 13 games without a homer.

The CL champion Swallows will play their final regular-season game Monday against the DeNA BayStars.

The 22-year-old Murakami is bidding to become the first Triple Crown winner in Japan since Nobuhiko Matsunaka of the then Daiei Hawks in 2004.

The Yomiuri Giants edged the BayStars 3-2. The Chunichi Dragons blanked the Hiroshima Carp 3-0.