Shohei Ohtani extended his career-high hitting streak to 18 games with a fifth-inning RBI double in the Los Angeles Angels' 5-4, 10-inning loss to the Oakland Athletics on Monday.

The Angels were one out from their eighth straight victory before Seth Brown singled in two runs to tie the game at 4 off reliever Aaron Loup in the ninth inning at Oakland Coliseum. 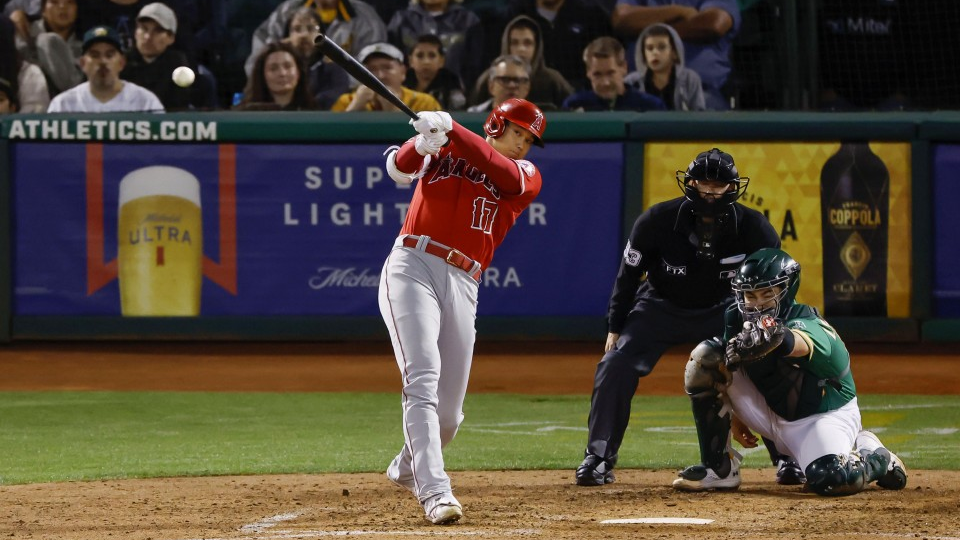 Shohei Ohtani of the Los Angeles Angels hits an RBI double in the fifth inning of a game against the Oakland Athletics on Oct. 3, 2022, at Oakland Coliseum in Oakland, California. (Kyodo)

Tony Kemp delivered a pinch-hit walk-off single in the 10th.

Ohtani surpassed his best hitting streak from Nippon Professional Baseball, 17 games in 2016, when he doubled in the fifth to score Livan Soto from first base. Ohtani then scored to make it 4-0.

He struck out three times and was intentionally walked in the 10th.

At Great American Ball Park in Cincinnati, Seiya Suzuki went hitless in four at-bats in the Chicago Cubs' 3-1 loss to the Reds, their first defeat in eight games.

In other action, Albert Pujols hit his 703rd career home run in the St. Louis Cardinals' 3-2 loss to the Pittsburgh Pirates.