Japan has reached back to its 2002 World Cup history for its kit at this year's tournament, drawing on the traditional origami paper-folding art that was part of the closing ceremony 20 years ago in Yokohama.

Twenty years ago, as Brazil captain Cafu lifted the trophy at Nissan Stadium to celebrate his nation's record fifth title, some 2.7 million Japanese "orizuru" paper cranes fluttered in the air, in a fitting Japanese finale.

"Orizuru is not just beautiful with its shape; people can also put their wishes and thoughts into it (while folding one)," said Sho Takaki of Adidas Japan, one of the new shirt's developers. 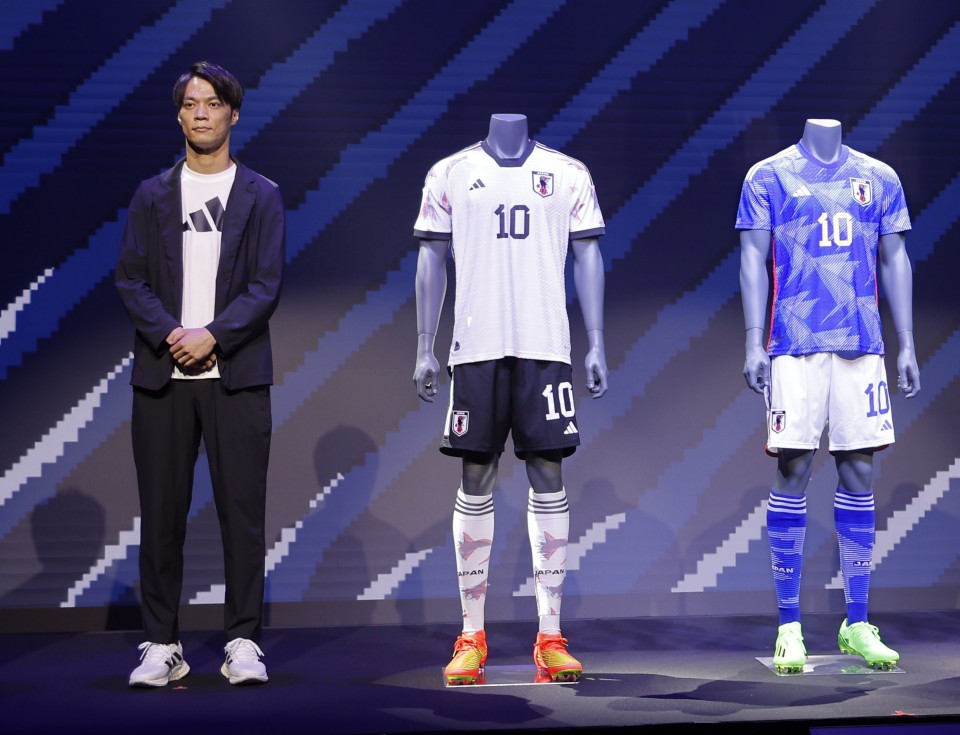 Sho Takaki of Adidas Japan in August 2022 in Tokyo shows the football strips with origami patterns that the Japan team will wear during the World Cup finals in Qatar. (Kyodo)

The origami concept has been well received at Adidas' headquarters in Germany, according to the developers, thanks to its worldwide recognition and popularity as Japanese culture.

"Origami has become a word (overseas). In Germany, it is practiced both for rehabilitation and as something children play with," said Masaru Ebayashi, who works at the company's headquarters.

The names and numbers on the back of the blue home shirt are yellow so viewers on smartphones and tablets can better recognize players.

Japan's white away kit has origami patterns on the shoulders and presents a stark contrast with black shorts, a first for Japan. The combination received a rave review from Real Sociedad's Takefusa Kubo.

"They are intimidating and make me feel we can win matches," he said.

Whether the origami-themed shirts grant fans' wish that Samurai Japan advance to the knockout phase in Qatar, where Germany, Costa Rica and Spain await in Group E, remains to be seen.

The origami patterns on both new shirts are not depicted in the fully completed forms -- of popular cranes and planes, for example -- and this, Takaki said, is central to the concept.

"We want the players to wear them on the pitch and bring (the joyous story) to completion," Takaki said.

Samurai Blue are set to play two friendlies in Dusseldorf, Germany, on Friday against the United States and on Sept. 27 against Ecuador.