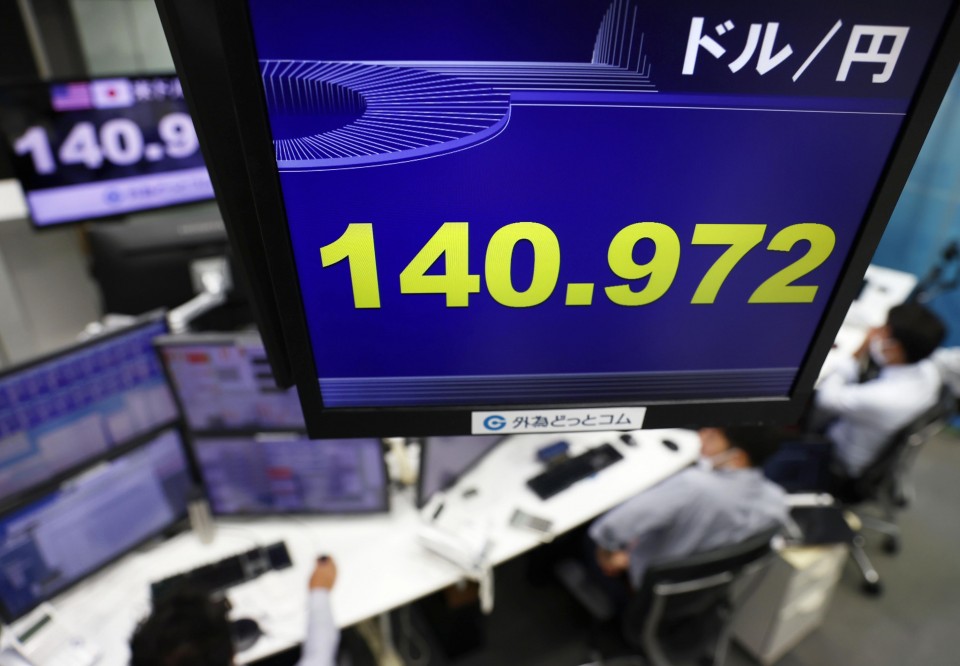 The U.S. dollar briefly plunged by around five yen to the 140 yen range on Thursday after the Japanese government stepped into the market to support the Japanese currency, its first such intervention in 24 years.

The U.S. currency was trading at a fresh 24-year high in the upper 145 yen range after the Bank of Japan decided to maintain its monetary easing policy at the end of its regular meeting Thursday.

The BOJ's policy starkly contrasts the Federal Reserve's decision Wednesday to raise its key policy rate and its suggestion of more aggressive rate hikes to come.

The greenback then plummeted below 141 yen at one point after the intervention from a high of 145.90 yen earlier in the day, and rallied back above the 142 yen line in volatile trading.

"We took a decisive step" as speculative moves have been seen in the currency market, Masato Kanda, vice finance minister for international affairs, told reporters, adding, "We will continue to watch foreign exchange moves with a high sense of urgency."

The action follows recent repeated verbal warnings by the top currency diplomat and Finance Minister Shunichi Suzuki against the yen's rapid slide, which started from early March when the dollar fetched around 115 yen.

The BOJ left its interest rates unchanged after a two-day policy meeting through Thursday and retained a pledge to take further easing steps should such a need arise.

The Japanese central bank's decision reassured market participants of the outlook for a wider gap between the U.S. and Japanese interest rates, dealers said.

On Wednesday, the Fed decided on a 0.75 percentage point rate hike and suggested more rate hikes later this year and next year, making the dollar more attractive, dealers said.

Kanda said earlier in the day after the dollar's rise to the new 24-year high that Japan could intervene in the foreign exchange market "anytime" to prevent the yen from plunging further. The U.S. currency gradually rallied back above the 145 yen line later.

Japanese stocks tracked an overnight slump on Wall Street, where the Dow Jones index ended at around a three-month low.