The United States and Pacific island nations agreed to strengthen their partnership at a summit meeting that ended Thursday, with Washington committing to $810 million in support for the region as it seeks to push back against China's growing clout.

The administration of U.S. President Joe Biden also unveiled its first-ever national strategy dedicated to the Pacific islands that warned China's "pressure and economic coercion" has the potential to undermine peace and security in the region.

"Today, security in the Pacific and for the Pacific islanders remains as critical as ever to us...and the world depends on your security," Biden said during the first-ever U.S.-Pacific Islands Summit in Washington, attended by leaders from countries including Fiji and the Solomon Islands. 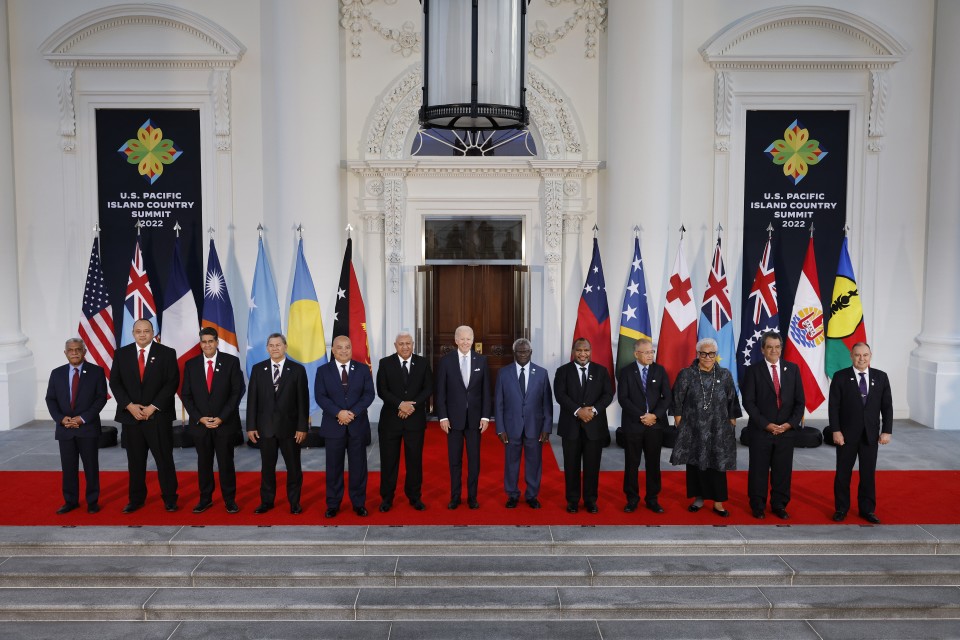 U.S. President Joe Biden (C) and leaders from Pacific island nations pose for a photograph at the White House on Sept. 29, 2022 in Washington. (Getty/Kyodo)

China's recent outreach to the Pacific has alarmed the United States and its allies, particularly the signing of a security pact between Beijing and the Solomon Islands in April. The deal has sparked concern that it could lead to China establishing a military presence in the islands to Australia's northeast.

In the Pacific Partnership Strategy, the Biden administration indicated that "heightened geopolitical competition" had led the United States to elevate "broader and deeper engagement" with the region to a foreign policy priority.

"Increasingly, those impacts include pressure and economic coercion by the People's Republic of China, which risks undermining the peace, prosperity, and security of the region, and by extension, of the United States," the strategy said.

In response, Chinese Foreign Ministry spokeswoman Mao Ning said at a press conference Friday that Beijing "never engages in economic coercion" as it fully respects the sovereignty and will of island countries, and expressed its firm opposition to "slander and smear" by the United States.

She said China believes Pacific island countries "should not be pawns in the game of great powers" and warned the United States against "engaging in geopolitical games in the name of cooperation."

The declaration issued by Biden and representatives from around a dozen Pacific island states did not specifically mention China, but they vowed to work together "in genuine partnership" in the face of "a worsening climate crisis and an increasingly complex geopolitical environment."

They also expressed their resolve to maintain peace and security in the region and said they recognize the importance of freedom of navigation and overflight.

"We will oppose all efforts to undermine the territorial integrity and sovereignty of any country, large or small. We condemn all wars of aggression, including Russia's brutal war against Ukraine," they said in the declaration.

A list of U.S. financial commitments was also made available on Thursday, which included a previously announced request to the U.S. Congress for a 10-year, $600 million economic assistance agreement with the Pacific islands including support for fisheries development.

With the Pacific countries particularly vulnerable to rising sea levels and other impacts of climate change, the Biden administration said it plans to provide a total of over $20 million to help forecast climate and extreme weather events in the region.

It also aims to offer $50 million in direct support to the Pacific islands to enable strong economic growth, and will establish a trade and investment dialogue with them by the end of this year to promote trade and address market access barriers.

The islands' security capabilities are a key area the United States hopes to bolster, with over $3 million in funds earmarked to enhance U.S. Coast Guard training and capacity-building in the region for maritime security.

The administration will also invest in infrastructure across the Pacific, including environmentally-friendly transportation.

China has been stepping up its economic engagement with the region such as through its Belt and Road infrastructure projects, although the program has often been criticized for a lack of transparency, poor environmental and labor standards, and saddling developing countries with debt.

The Biden administration is also seeking to increase its diplomatic presence in the region by beginning discussions on the establishment of embassies in Kiribati and Tonga, in addition to its plan, announced in February, to open an embassy in the Solomon Islands.

The United States previously had an embassy in the Solomon Islands' capital Honiara, but it was closed in 1993, according to the State Department.

The Solomon Islands, which switched its diplomatic recognition from Taiwan to Beijing in 2019, has been signaling a tilt toward Chinese influence.

The latest plan would expand the number of Pacific island embassies from six to nine, according to the White House.