Prime Minister Fumio Kishida agreed with his Australian and Indian counterparts on Tuesday to cooperate in achieving a free and open Indo-Pacific, a vision that slain former leader Shinzo Abe advocated, on the second day of Japan's "condolence diplomacy."

Kishida reached the agreements during separate meetings with Anthony Albanese and Narendra Modi ahead of the state funeral in Tokyo for Japan's longest-serving prime minister, who was shot dead by a gunman while making an election speech in July.

Japan, India and Australia compose the Quad, a four-way grouping involving the United States. They have been stepping up cooperation in various fields such as defense and energy amid China's increasing military and economic clout in the region. 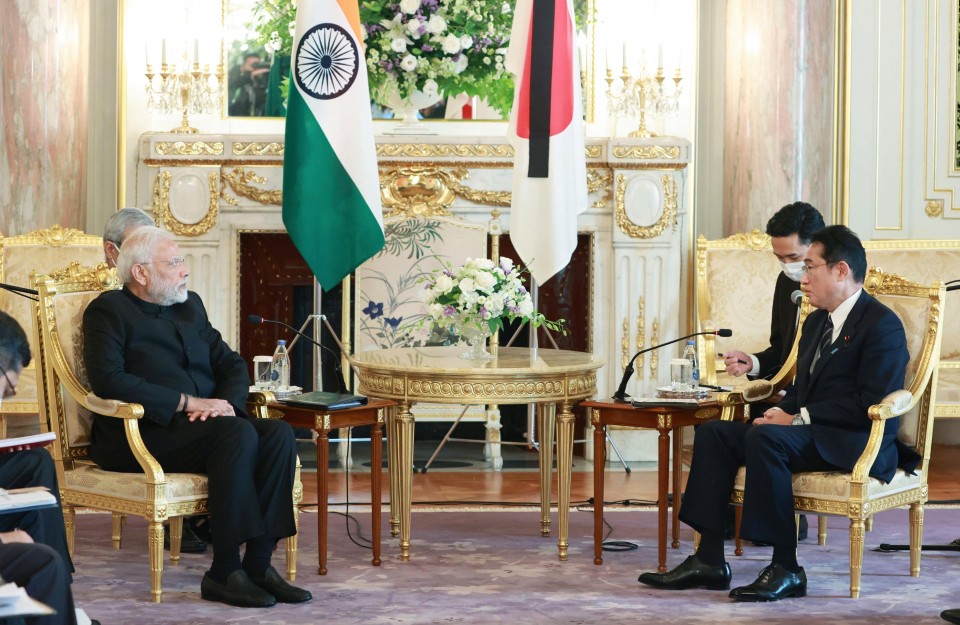 In his meeting with Modi, part of which was open to the media, Kishida said Japan will build on the diplomatic achievements of Abe and continue cooperating with India to realize a free and open Indo-Pacific.

Modi said ties between Tokyo and New Delhi have reached a "new height" after expanding in many areas under the administration of Abe, with whom India's premier built a personal relationship. He expressed his heartfelt condolences over Abe's death.

Kishida and Modi exchanged views on Russia's war on Ukraine and affirmed the necessity of peacefully resolving conflicts across the globe, the Japanese Foreign Ministry said.

The two leaders also attached importance to "transparent and fair" finance for the sustainable development of poorer countries, in an apparent reference to China's alleged "debt-trap diplomacy" using loans as leverage to gain concessions from borrowing nations.

In a separate meeting, the Japanese and Australian leaders pledged to deepen the countries' security relations, according to the ministry.

Albanese, who is on his second visit to Japan since taking office in May, said Abe's death was a "tragic loss" for Australia as well.

Kishida and the Australian incumbent and previous leaders looked back on Abe's accomplishments and agreed to further promote bilateral relations in line with his wishes, the ministry said.

From the United States, Vice President Kamala Harris attended the funeral, following her meeting with Kishida on Monday.

The two leaders discussed China's "aggressive and irresponsible provocations" in the Taiwan Strait and reaffirmed the significance of maintaining peace and stability there, the White House said.

Communist-led China and democratic Taiwan have been governed separately since they split in 1949 due to a civil war. Beijing regards the self-ruled island as a renegade province to be reunified with the mainland, by force if necessary.

Japan cut diplomatic ties with Taiwan and established them with mainland China in 1972, recognizing Beijing as the sole legitimate government of China. Japan-Taiwan relations have been maintained on a nongovernmental basis.

In a symbolic move showing the sensitivity over Japan's position, the name of "Taiwan" was announced when Su Jia-chyuan, who heads an association in charge of bilateral affairs, and other Taiwanese people offered flowers during Abe's state funeral.

The dignitaries from Taiwan were treated almost equally with the other delegates, but Japan avoided calling the island "Republic of China," Taiwan's official name as a country, in apparent consideration of Beijing.

China, however, reacted sharply, as Foreign Ministry spokesman Wang Wenbin told reporters that Japan "should heed relevant issues in accordance with the one-China principle and not provide any stage or opportunity for Taiwan independence separatist forces."

From China, Wan Gang, vice chairman of the Chinese People's Political Consultative Conference, attended the state funeral for Abe, instead of Vice President Wang Qishan, who it was widely predicted would be sent for the event.

Wang was present at Queen Elizabeth II's state funeral in Britain earlier this month. He is a higher-ranking official than Wan.

Kishida decided to host a state funeral for Abe soon after he was killed, touting his political achievements. But opposition to the ceremony mounted at home amid its ballooning costs, among other complaints.

The Japanese premier has claimed that the state-sponsored funeral for Abe would serve as an important opportunity to communicate with other nations. He was scheduled to hold talks with about 40 foreign dignitaries over the three days through Wednesday.