China and Japan on Thursday are set to mark the 50th anniversary of the normalization of bilateral diplomatic ties, but prospects are dim for their relations to improve significantly amid a deepening rift between Beijing and Western nations with heightened tensions across the Taiwan Strait.

Experts have pointed out that bilateral relations are "full of downside risks" with a stronger rivalry between the two Asian neighbors, and the 50th anniversary is unlikely to change the basic trend in ties. 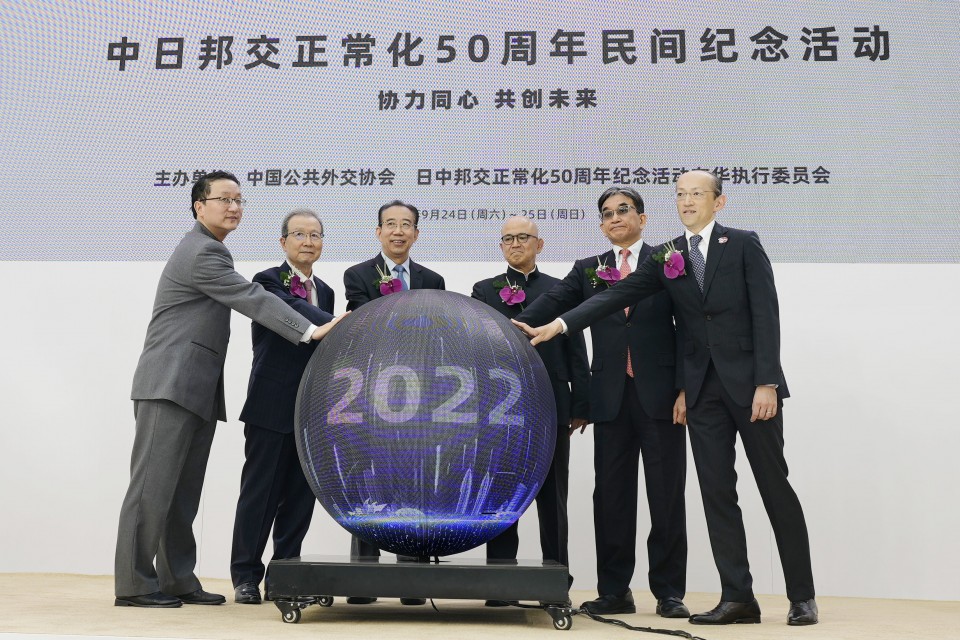 Japanese Ambassador to China Hideo Tarumi (2nd from R) poses for a photo on Sept. 24, 2022, during an event marking the 50th anniversary on Sept. 29 of the normalization of Japan-China diplomatic relations in Beijing. (Kyodo) ==Kyodo

However, they said Beijing's interest in not further escalating tensions with Tokyo as it focuses on intensifying competition with the United States as well as mutually beneficial trade and investment relations between the world's second- and third-largest economies, offer a ray of hope for the improvement of ties.

Additionally, the eventual full resumption of people-to-people exchanges between the two countries, including tourists and students, that have been disrupted by the COVID-19 pandemic could enhance overall relations to some degree, they said.

In 2019, before the outbreak of the global health crisis, the number of people traveling between mainland China and Japan stood at over 12 million, with Japan welcoming nearly 10 million visitors from the mainland -- the highest number among all foreign visitors and accounting for some 30 percent of the total, official data showed.

Over the 50 years of relations, more than 250 friendship city agreements have been concluded between the two countries, Chinese Ambassador to Japan Kong Xuanyou said at the symposium.

Despite those figures suggesting robust bilateral exchanges, public sentiment was not favorable last year, with nearly 80 percent of respondents to a Japanese government poll saying they had no affinity for China and about 70 percent in China holding a negative image of Japan in a private-sector survey.

Japanese officials cited "concerns about China's acts of hegemony," such as Chinese vessels' repeated intrusions into Japanese territorial waters near the Japan-controlled, China-claimed Senkaku Islands in the East China Sea as a factor behind the government survey results.

In the private-sector poll, many Chinese respondents referred to the "improper comments and behavior" of anti-China Japanese politicians and Tokyo's "diplomatic policy of following the United States" as reasons for their negative sentiment toward Japan. 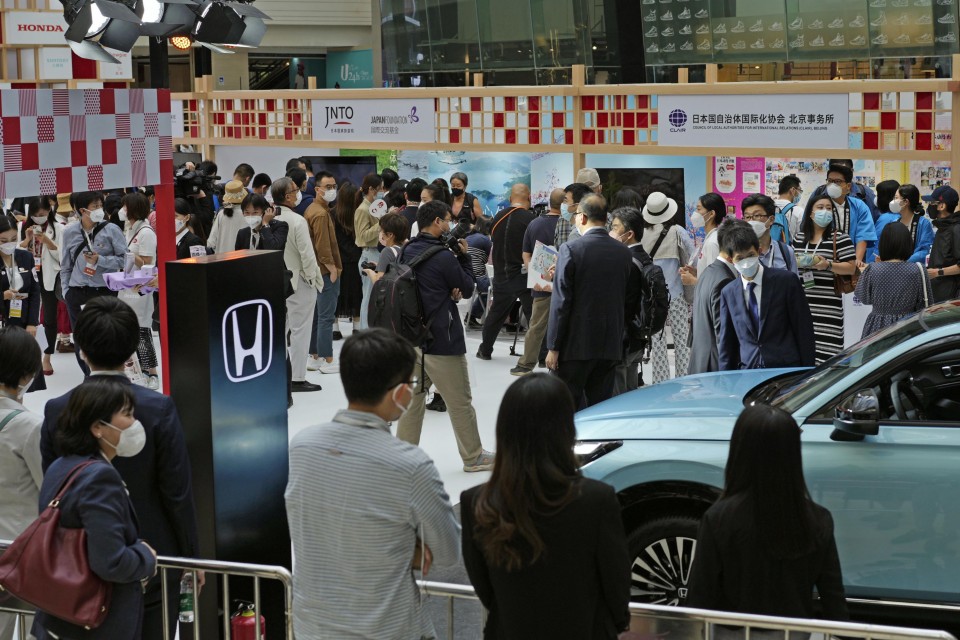 An event marking the 50th anniversary on Sept. 29, 2022, of the normalization of Japan-China diplomatic relations is held at a shopping mall in Beijing on Sept. 24. (Kyodo) ==Kyodo

Bilateral relations deteriorated further following U.S. House of Representatives Speaker Nancy Pelosi's visit to Taiwan in August, which prodded Beijing to conduct large-scale military drills near the island. Some of the ballistic missiles fired during the exercises fell in Japan's exclusive economic zone.

Japanese Ambassador to China Hideo Tarumi said at the symposium that bilateral ties face "a number of challenges" due partly to an "overwhelming shortage of mutual dialogue and exchanges" amid the COVID-19 pandemic declared in March 2020.

Against the backdrop of China's rapid rise and subsequent assertiveness as well as deteriorating public sentiment toward it in Japan, attempts to engage with Beijing have become "a big political risk" for Tokyo, the envoy said.

"The normalization of diplomatic ties was realized thanks to the leaders of both countries who had a strategic way of thinking and political courage," but 50 years later there are "fewer and fewer leaders who can take political risks for bilateral relations," Tarumi lamented.

Jia Qingguo, professor at Peking University's School of International Studies, pointed out at the event that Japanese officials and media have hyped up the "China threat theory" in response to its rise and "the magnifying effect of negative news in the internet age cannot be ignored."

On the economic front, Masakazu Tokura, chairman of the Japan Business Federation, the country's most powerful business lobby better known as Keidanren, has said, "We cannot do without China. There are areas where our values do not match, but we have to maintain dialogue and exchanges."

But Stephen Nagy, senior associate professor at International Christian University in Tokyo, said it "will not be easy" for Japan and China to return to the so-called "cold politics, hot economics" state that once characterized bilateral ties.

The economic relationship will likely "become more complicated as the Chinese economy slows and as Japan selectively diversifies away from China," with the United States putting increased pressure on countries and businesses trading with China.

Japanese businesses will likely continue to invest in China "through a formula in which they make things in China by Chinese for Chinese with Japanese technologies," while they continue to build alternative production networks in the rest of Asia and Europe, Nagy said.

"Japan-China economic cooperation involving cutting-edge technology has become difficult because China is no longer a free market for Japanese companies" in light of challenges related to the transfer of sensitive technology, investment restrictions and human rights issues, he said.

But Jimbo, an expert on international security, stressed the two countries can coordinate policy through discussions on how the world economic system and rules should be, given that Beijing needs access to the global market, including the Western nations in the G-7.

Da Zhigang, director of the Institute of Northeast Asian Studies at Heilongjiang Provincial Academy of Social Sciences, told the Global Times, a tabloid affiliated with China's ruling Communist Party, earlier this month that the two countries need to "manage differences" and "have a strong sense of risk control" for future bilateral relations.

Ambassador Kong urged the two countries to make the 50th anniversary a milestone and new starting point, and to strive to "hand over more mature, stable, healthy and resilient bilateral ties" to people in the next 50 years.