No. 3 maegashira Tamawashi downed joint leader No. 8 Hokutofuji on Wednesday, taking the sole lead for the first time after 11 days at the Autumn Grand Sumo Tournament.

Tamawashi (10-1), a 37-year-old who won his only Emperor's Cup in January 2019, had a slight edge over his fellow title chaser with his opening charge and followed it up with thrusts to Hokutofuji's face and throat at Ryogoku Kokugikan. 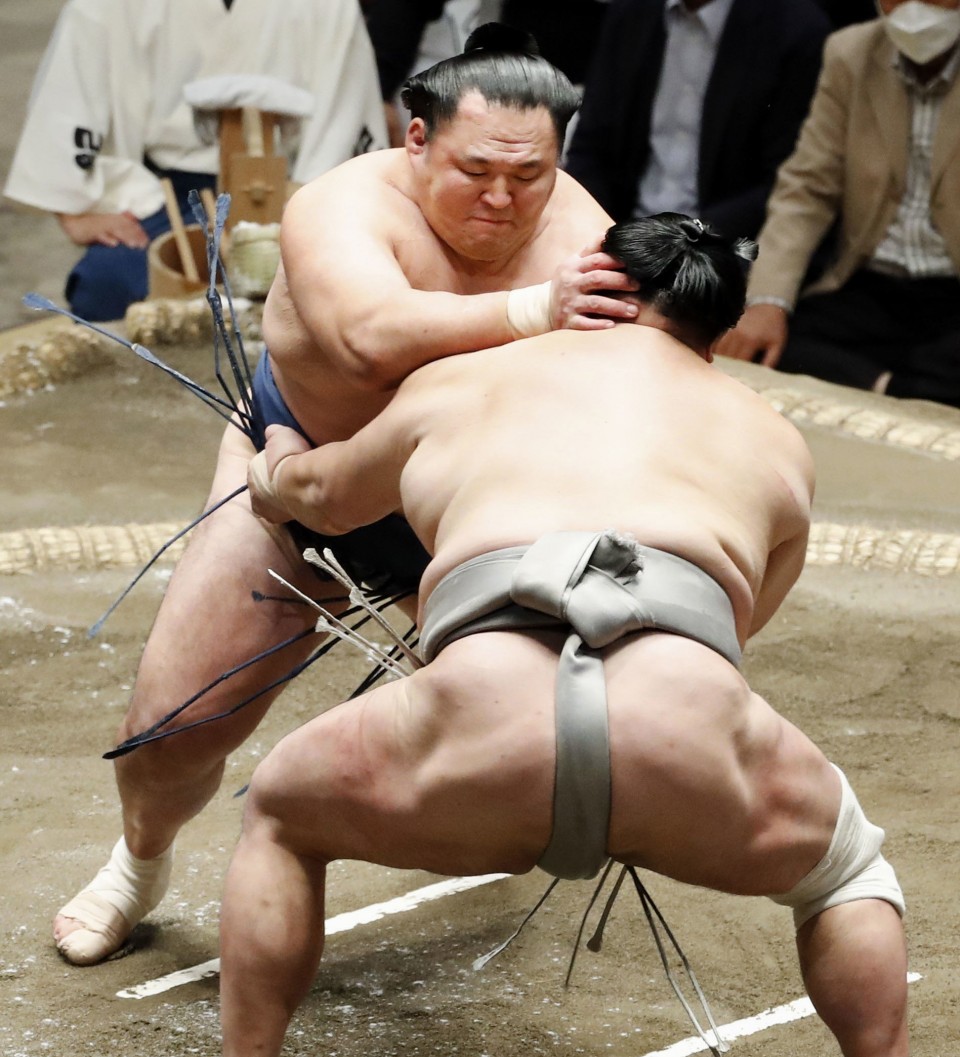 Hokutofuji (9-2) initially managed a left underarm belt hold but let go under pressure before losing his footing, leaving Tamawashi with a simple job of pushing him off the raised ring.

No. 10 Nishikifuji (9-2) won his fifth straight to pull even with Hokutofuji. He dispatched No. 14 Chiyoshoma (7-4), grabbing a right overarm hold en route to a sound force-out victory.

No. 4 Takayasu (8-3), who handed Hokutofuji his first defeat on Tuesday, took a step backward in the title chase, falling to a proactive No. 9 Myogiryu (6-5).

Myogiryu's right-handed attack to the throat left Takayasu unable to exert pressure. Following a standstill in the middle, the former ozeki surrendered a belt hold and was floored with an underarm throw.

Wakatakakage (8-3) won his eighth straight to clinch a winning record and keep himself in the title mix, driving in low and bulldozing fellow sekiwake Hoshoryu (5-6) out in seconds.

Tobizaru (8-3) secured a winning record with his sixth straight win. The No. 1 kept No. 3 Ura (6-5) away from his belt before quickly grabbing one himself to roll the stocky trickster over with an underarm throw in a bout lasting just over a minute.

Mitakeumi (3-8) will drop from the second highest rank of ozeki at the next meet after falling to a last-ditch thrust-down by No. 5 Sadanoumi (7-4).

The demotion-threatened "kadoban" ozeki needed eight wins to retain his rank but has lost his last six bouts. He will wrestle as sekiwake in November in Fukuoka, where winning 10 or more will allow him to return as ozeki in January.

Ozeki Shodai (2-9) won for the first time since opening day. He was easily forced to retreat, but thrust down No. 6 Wakamotoharu (6-5) at the edge. With his losing record for the tournament, Shodai will need eight wins in November to avoid relegation to sekiwake.