A comprehensive list of the more than 120,000 people of Japanese descent who were held in internment facilities across the United States during World War II has been unveiled in Los Angeles.

Some 200 people, including former internees, took part in a ceremony Saturday to commemorate the exhibition of the first-ever full roster at the Japanese American National Museum. 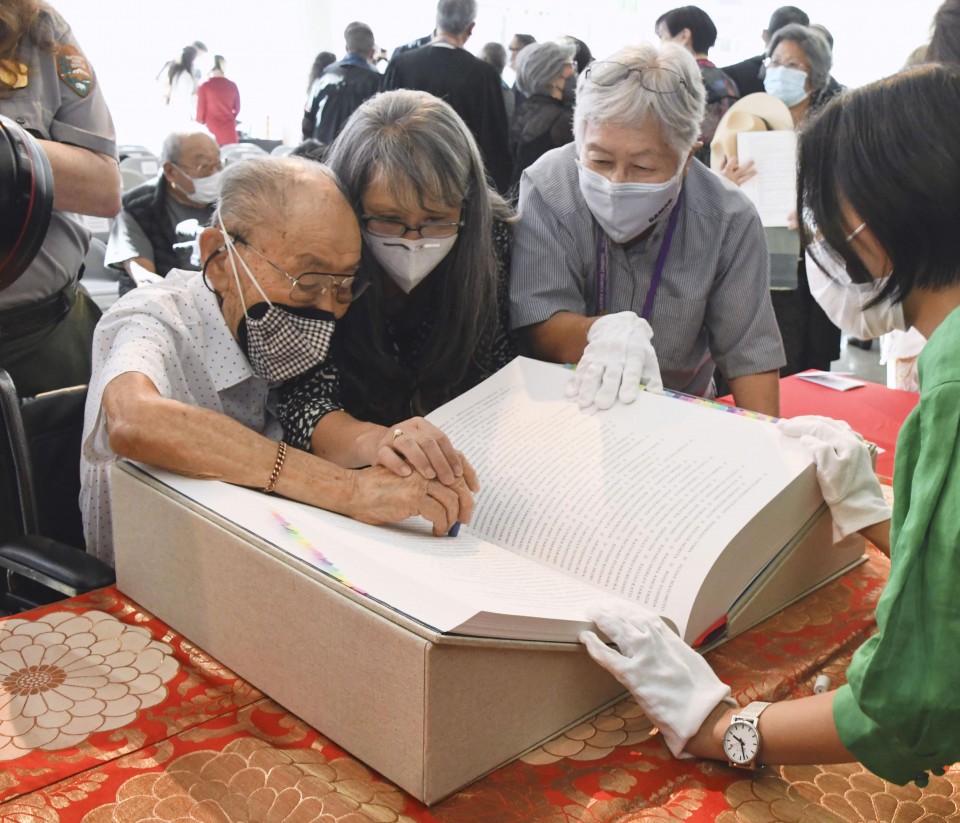 People on Sept. 24, 2022, in Los Angeles, look at a roster listing over 120,000 Japanese Americans sent to internment camps during World War II after being considered "enemy aliens" in the United States. The list was completed 80 years after the signing of an Executive Order by U.S. President Franklin D. Roosevelt in February 1942, two months after Japan's Pearl Harbor attack, which authorized the U.S. military to evict residents in specific areas. (Kyodo) ==Kyodo

Duncan Ryuken Williams, a professor at the University of Southern California, led the project of completing the list as this year marks the 80th anniversary of President Franklin Roosevelt signing the executive order that authorized internment about two months after Japan's attack on Pearl Harbor.

After Roosevelt signed Executive Order 9066 in February 1942, U.S. authorities sent Japanese immigrants and Japanese-Americans to internment camps set up in desolate areas far from their homes.

The list covers 125,284 people held in 75 locations, including the facilities controlled by the War Relocation Authority as well as others managed by the Justice Department and the U.S. military.

"One of the most important things is that history is not just numbers," Williams, 53, said, noting that the U.S. government's actions at the time "affected real people" who lost their homes, educational opportunities and more.

"We gave...full Japanese names for every single person, and so that gives a little bit of a sense of the real individuals that were affected by this experience," he said.

"I was relieved that my name was there," said Kanji Sahara, an 88-year-old former internee who attended the ceremony. He was incarcerated as a young boy in wartime facilities including those in Arkansas.

"It will never happen again," Sahara said, adding it is important to learn about such incidents from the past to make sure "we don't repeat history."