Foreign ministers from Japan, the United States, Australia and India were committed Friday to advancing United Nations reform including an increase in permanent seats on its Security Council, as the world body faces challenges amid Russia's invasion of Ukraine.

The foreign ministers of the four major Indo-Pacific democracies in the so-called Quad group also underscored the need to "address attempts to unilaterally subvert the international and multilateral system" including the workings of the United Nations, according to a document issued after their meeting in New York. 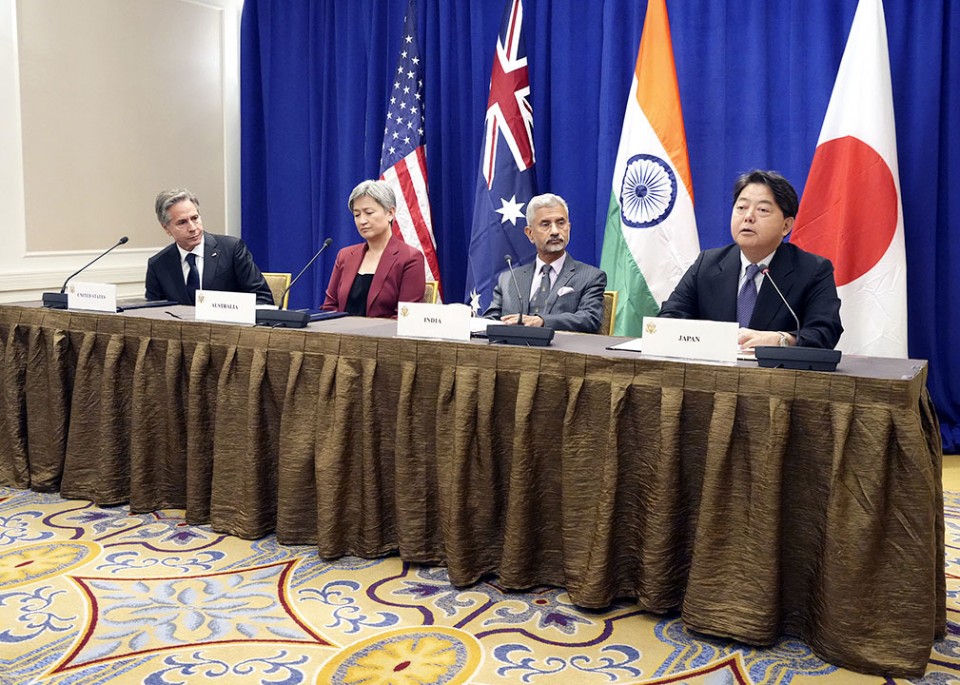 Foreign ministers from (from R) Japan, India, Australia and the United States meet in the so-called Quad grouping on Sept. 23, 2022, in New York. (Photo courtesy of Japan's Foreign Ministry)(Kyodo)

The gathering took place as the United Nations has come to be viewed as dysfunctional in addressing international disputes, especially after Russia, a veto-wielding permanent member of the Security Council, launched a war against Ukraine in late February.

The first Quad foreign ministerial meeting since February was held on the sidelines of the U.N. General Assembly's ongoing annual session.

In the document, the ministers said they backed expansion of both permanent and nonpermanent seats of the Security Council "so that the Council reflects the current global realities and incorporates more geographically diverse perspectives."

Meanwhile, the document fell short of discussing whether or not additional permanent Security Council members would have veto power as held by the current five permanent members -- Britain, China, France, Russia and the United States, all of which are nuclear-weapon states.

U.S. President Joe Biden called for an expansion of the council among other reforms during his speech to the U.N. assembly on Wednesday, citing growing challenges posed by the Russian war.

Biden also said the permanent members including Washington should show restraint with the veto, using it only in extraordinary circumstances.

Japanese Foreign Minister Yoshimasa Hayashi told reporters after the four-way meeting, "I welcome that the United States expressed such a position to ensure that the Security Council remains credible, at a time when the United Nations is facing challenges."

The vision has been promoted by Tokyo and Washington as a veiled counter to China's growing military and economic clout in the region.

The four ministers "strongly oppose any unilateral actions that seek to change the status quo or increase tensions in the region," according to the document.

"The free and open international order based on the rule of law is under threat," Hayashi said during an opening part of the talks that was attended by media, apparently with Russia's invasion of Ukraine in mind.

"I think our meeting today...is evidence that the Quad is strong and getting stronger, strengthening our multilateral cooperation," Blinken said at the outset of the talks.

The Quad ministers also signed a new guideline for a "humanitarian assistance and disaster relief mechanism" through which they aim to further strengthen their collaboration to effectively respond to disasters in the region.

The mechanism lays the groundwork for the members to cooperate and coordinate even more, such as on joint disaster responses, Blinken said.

The four foreign ministers also issued a statement regarding "the global threat" of ransomware attacks, agreeing to work together with the aim of "enhancing the cyber capabilities of Indo-Pacific countries."

The next in-person Quad foreign ministerial meeting will be held in New Delhi in early 2023.

In March, leaders of the Quad nations agreed to launch the mechanism to "provide a channel for communication" as they each addressed and responded to the crisis in Ukraine, according to a joint statement issued after their teleconference at the time.

When they gathered in Tokyo in May, the four leaders also vowed to extend more than $50 billion in infrastructure assistance and investment in the Indo-Pacific region over the next five years, in a move apparently seeking to counter Beijing's "One Belt, One Road" cross-border infrastructure initiative covering Asia, Africa and Europe.