U.S. Secretary of State Antony Blinken on Friday told his Chinese counterpart Wang Yi that preserving peace and stability over Taiwan is "critical" to regional and global security amid growing tensions over the self-ruled democratic island.

But there were no signs of the two sides ironing out their differences over Taiwan, with Wang warning that the United States is sending "a very wrong and dangerous signal" to the island, which Beijing views as its own, by publicly claiming it is ready to defend the territory, according to Chinese state-run Xinhua News Agency.

During the nearly 90-minute talks, held on the sidelines of the U.N. General Assembly in New York, Blinken also stressed the need to maintain open lines of communication to "responsibly manage" the competition between the United States and China, according to a senior U.S. government official. 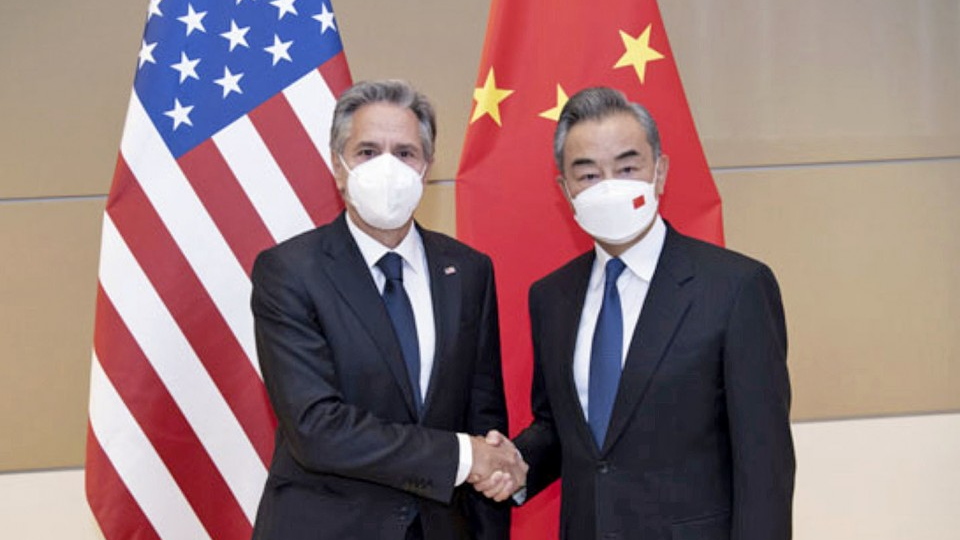 The meeting took place after U.S. House of Representatives Speaker Nancy Pelosi traveled to Taiwan in early August to show support for the island as it faces pressure from China, a move that has infuriated Beijing.

China reacted by holding large-scale military drills near Taiwan and by suspending exchanges with the United States in areas including talks on climate change. The military activities also included repeated crossings by Chinese navy vessels and warplanes of the median line between the mainland and Taiwan, a boundary that has been respected by both sides for decades.

U.S. President Joe Biden, meanwhile, asserted in an interview aired Sunday that U.S. forces would defend Taiwan if it is attacked by China, in what seems a shift from Washington's long-standing policy to keep its stance on the issue ambiguous.

According to Xinhua, Wang said China-U.S. relations are at a "critical juncture," and that it is imperative for the two sides to "adopt the right approach to getting along between the two major countries, and to work to stop bilateral ties from further deterioration."

"The Taiwan question is at the core of China's core interests, and it carries significant weight in the minds of the Chinese people," Wang was quoted as saying.

Blinken, for his part, made "very clear" to Wang that there has been no change to the United States' one-China policy, under which Washington recognizes Beijing as the sole legal government of China, but that the policy includes "opposition to unilateral changes to the status quo by either side," the senior U.S. official said.

The official noted that China has taken "a number of provocative steps that have by design acted to change the status quo" following the Taiwan trip by Pelosi, the third-highest-ranking U.S. official.

While such concerns are driving much of the U.S. approach on the Taiwan issue, China has "a very different view, obviously," the official added.

It was not immediately clear whether any progress was made toward arranging a possible meeting between Biden and Chinese President Xi Jinping, which, if realized, would be the first in-person summit between the two since Biden took office in January last year.

In late July, the two leaders had their fifth call since Biden took office and discussed the value of meeting face to face, agreeing to have their teams follow up to find a mutually agreeable time to do so.

During talks with Wang, Blinken reiterated the United States' condemnation of Russia's military aggression against Ukraine and warned of the "implications" if China were to provide support to Moscow in its war efforts.

The top U.S. diplomat, meanwhile, underscored that the United States remains open to cooperating with China "where our interests intersect," possibly indicating areas such as climate change, the official said.

The United States switched its diplomatic recognition from Taipei to Beijing in 1979 but has kept up unofficial relations with Taiwan and supplies the island with arms and spare parts to help it maintain sufficient self-defense capabilities.

The so-called strategic ambiguity policy on U.S. military intervention is intended not only to deter China from using force against Taiwan but also to dissuade Taiwan from seeking independence, as neither Beijing nor Taipei can be certain the United States would intervene to defend the island should a conflict arise.

Biden said in the TV interview that the United States is not encouraging Taiwan to become independent, while also saying that "Taiwan makes their own judgments about their independence," adding "that's their decision."

Critics have reportedly argued that his comments could be perceived as tacit support for Taiwan to declare independence, believed to be a red line for Beijing.