The first meeting in over two years between Japanese and South Korean leaders last week could be a harbinger of improving ties and a critical step toward cooperation in addressing the issues of North Korea's missile tests and nuclear aspirations. 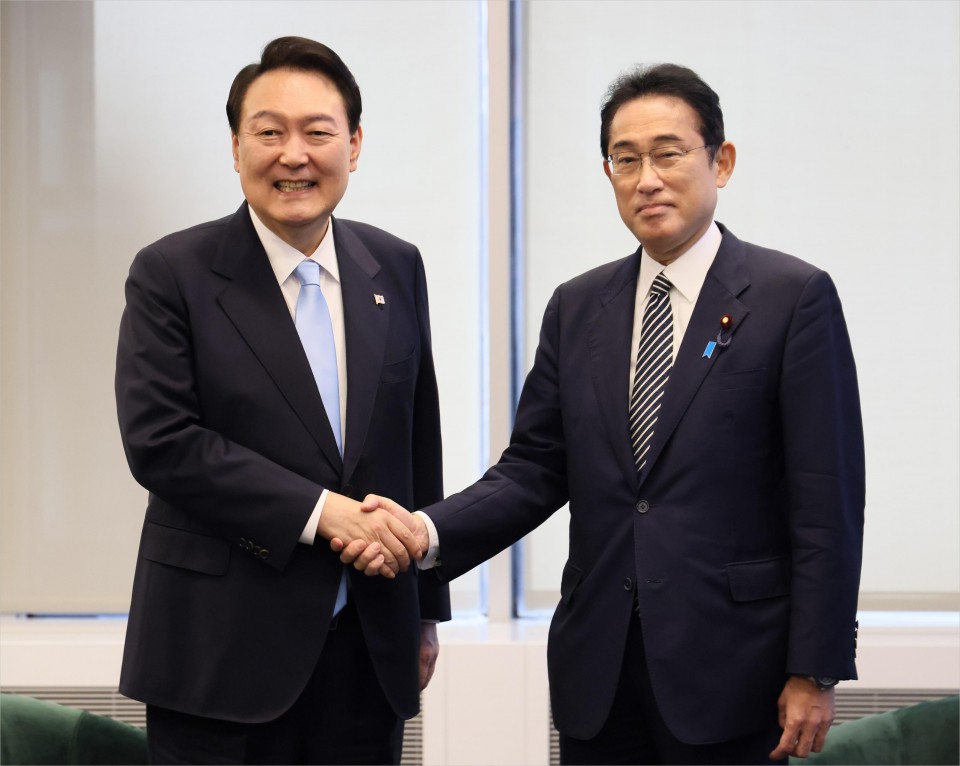 The two agreed to restore sound bilateral relations and vowed to enhance their cooperation to deal with issues related to North Korea during their 30-minute talks, the first in-person and sit-down meeting between leaders of the two neighbors since December 2019.

"Even though the meeting was short and informal, it was a crucial step for the leaders of the two nations to restore a trustful relationship, because it paved the way for more summit talks (possibly) by the year-end," said Junya Nishino, a political science professor at Keio University.

The Tokyo-Seoul relationship sank to its lowest point in years under the administration of Yoon's predecessor Moon Jae In over issues including South Korean court orders to liquidate local assets seized from two Japanese companies.

The companies were sued over alleged forced labor during Japan's 1910-1945 colonial rule of the Korean Peninsula.

The companies have not complied with the compensation orders as Tokyo, under successive leaders from Shinzo Abe to Yoshihide Suga and now Kishida, maintains all claims stemming from its colonial rule, including compensation for Koreans who worked for Japanese companies, were settled "completely and finally" under a bilateral agreement signed in 1965.

Yoon, known for taking a hardline stance on Pyongyang, took office in May with a pledge to take a future-oriented approach toward Japan. Since then, he repeatedly called for a meeting with Kishida.

"For President Yoon, improving Japan-South Korea relations is essential to deny the Moon administration's diplomatic policies, and to differentiate his policies," said Katsuyuki Yakushiji, a professor at Toyo University well-versed in Japan's diplomacy.

When Seoul announced a plan to meet with Kishida in New York, Tokyo said it was unsure whether the meeting would be held.

A Japanese government official suggested that the summit talks were unplanned and said Kishida and Yoon held a private conversation in a "pull-aside" meeting, although he did not clarify which one requested it, just saying, "That it happened in a natural manner."

Yakushiji said he believes Kishida must have a strong sense of distrust of South Korea based on the Moon government unilaterally nullifying a landmark deal to settle the issue of Koreans forced to work at Japan's wartime military brothels "finally and irreversibly." The deal was struck in 2015 when Kishida was foreign minister.

The Japanese premier was also apparently concerned about how conservative members of his ruling Liberal Democratic Party would react if he had talks with Yoon, Yakushiji said.

The meeting was held at a sensitive time for Kishida as the approval rate of his Cabinet had fallen to 40.2 percent, a new low since he took the helm in October last year, according to a Kyodo News survey conducted earlier this month.

The deterioration was apparently due to the LDP's controversial links to the Unification Church, and a planned state funeral Tuesday for former Prime Minister Abe amid opposition from more than half of the public in opinion surveys.

Yakushiji said it was the "right decision" for Kishida to meet Yoon to take advantage of a time "when a positive mood between the two nations has finally begun to appear."

Nishino, who also serves as the director of the Keio Center for Contemporary Korean Studies, said the two leaders could meet again this year at international conferences scheduled for November which both are expected to join such as summit talks of the Group of 20 major economies in Indonesia and the Asia-Pacific Economic Cooperation forum.

Nishino also said Yoon is likely to be invited by Kishida to a Group of Seven industrialized nations summit to be held in Hiroshima in May as a guest country, as Britain did at a G-7 summit in Cornwall, southwestern England, in 2021.

"Because, for Kishida, who wants to lead toward creating a world without nuclear weapons, South Korea's cooperation is vital to tackle the nuclear issues of North Korea and China," he said.

If the situation over the wartime labor issue worsens, Japan would find it difficult to invite South Korea to the Hiroshima summit, according to Nishino.

The South Korean Supreme Court may finalize a court order to liquidate the Japanese corporate assets as early as August, according to local media reports, but it has yet to make a decision on it, possibly taking the Yoon administration's policy toward Japan into account.

"As long as South Korea's government continues efforts to solve the wartime labor issue, South Korean judicial authorities will remain cautious on making a decision on the asset liquidation issue, so it depends on the Yoon administration whether or not the issue will be solved," Nishino said.