Japan gov't not to resubmit immigration bill in fall parliament

The Japanese government has decided to forgo resubmitting a controversial bill revising immigration rules at an extraordinary parliamentary session expected to be convened in this fall, an official with knowledge of the situation said Wednesday.

The bill aimed at amending the immigration law was withdrawn from last year's ordinary Diet session amid backlash over Japanese measures on people applying for refugee status and the government's response to 33-year-old Sri Lankan Ratnayake Liyanage Wishma Sandamali's death in a Nagoya detention facility in 2021. 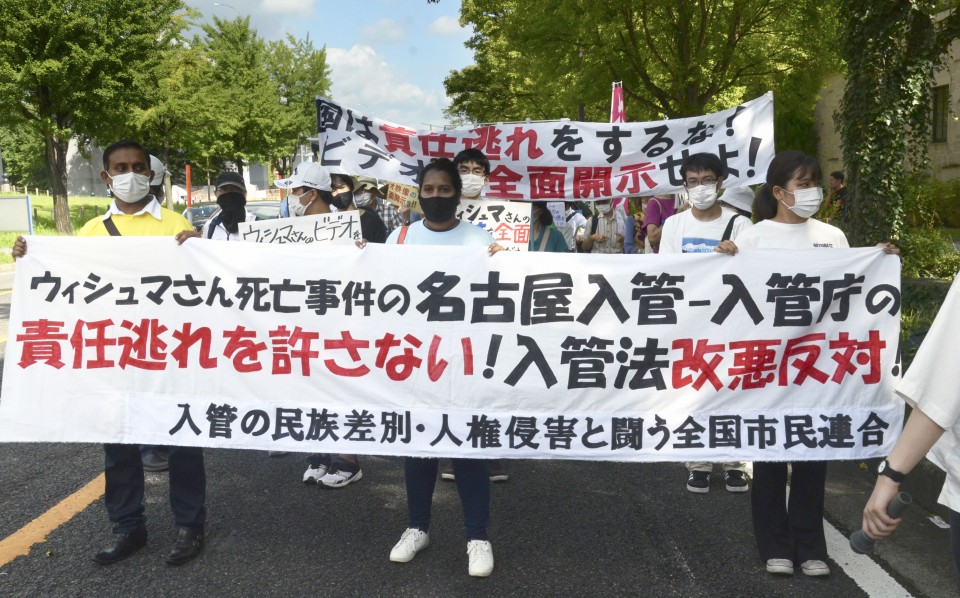 The official, who spoke on condition of anonymity, said the Justice Ministry and the Immigration Services Agency have determined that they need more time and work to amend the law.

The ministry and the agency ran into difficulties following an initial review regarding the prevention of deaths in detention and the country's acceptance of Ukrainian evacuees fleeing the Russian invasion.

The government's decision has come just days after demonstrations against the potential resubmission were held Sunday across Japan, with organizers saying around 200 people attended a protest in Tokyo and 70 demonstrators, including Wishma's sister Poornima, marched in central Nagoya.

Wishma arrived in Japan in 2017 as a student, but was taken into custody at the Nagoya Regional Immigration Services Bureau in August 2020 for overstaying her visa after an earlier asylum application had been rejected.

She died in March 2021 after complaining of ill health, including vomiting and stomachaches, for around a month. Her family members say it was clear that she would have lived if officials at the immigration bureau had given her appropriate care.

Other changes to the law proposed by the government had included measures for a complementary protection system, which would allow people who do not fulfill the criteria of a refugee but are judged to still need asylum from their home country to stay in Japan.

Ukrainian evacuees are currently eligible to stay and work for up to a year on specified activities visas, with 1,763 granted some form of residency as of Sunday. Conversely, Japan approves few refugee applications, with just 74 people given the status in 2021.