After competing as one of two South Sudan athletes at last year's Tokyo Olympics, Abraham Guem has returned to Japan to kick off his professional athletic career.

"I want to show that sports can change the future," said the 23-year-old Guem, who was appointed this past spring as a board member of South Sudan's Olympic committee and has been in Japan since May.

Guem set a national 1,500-meter record while being eliminated in the heats at the Tokyo Olympics, but his times worsened after returning home to a more difficult training environment. 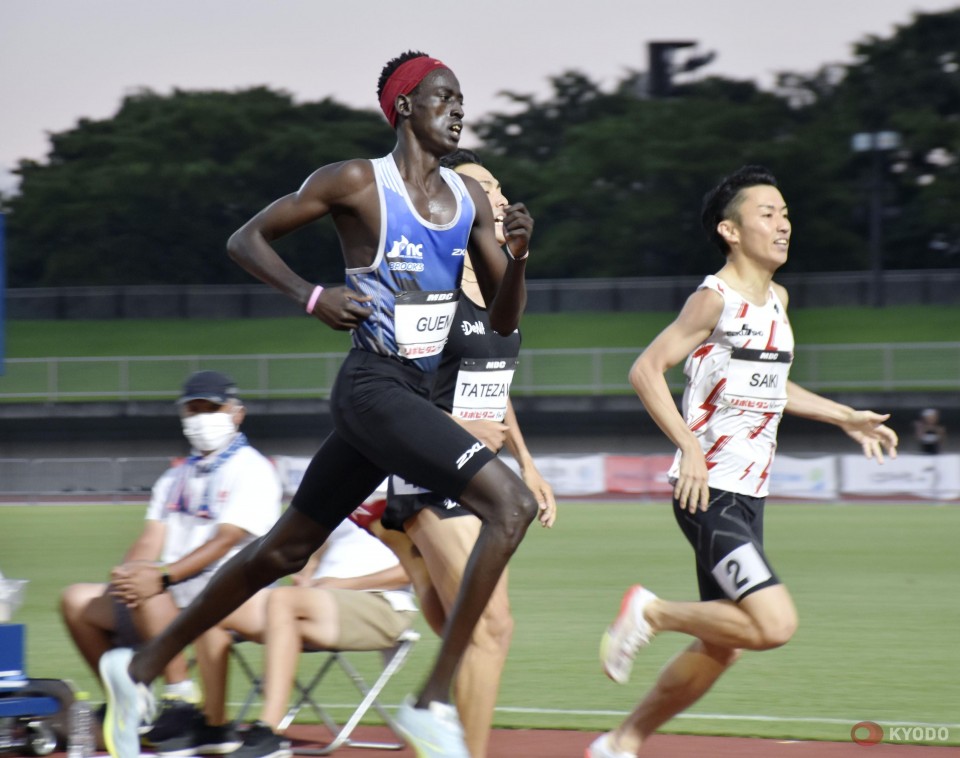 Then came a call from the Ibaraki Prefecture-based Ami Athlete Club, which bills itself as Japan's only professional middle-distance running club, where Yasunari Kusu led the club's attempts to bring Guem back to Japan. 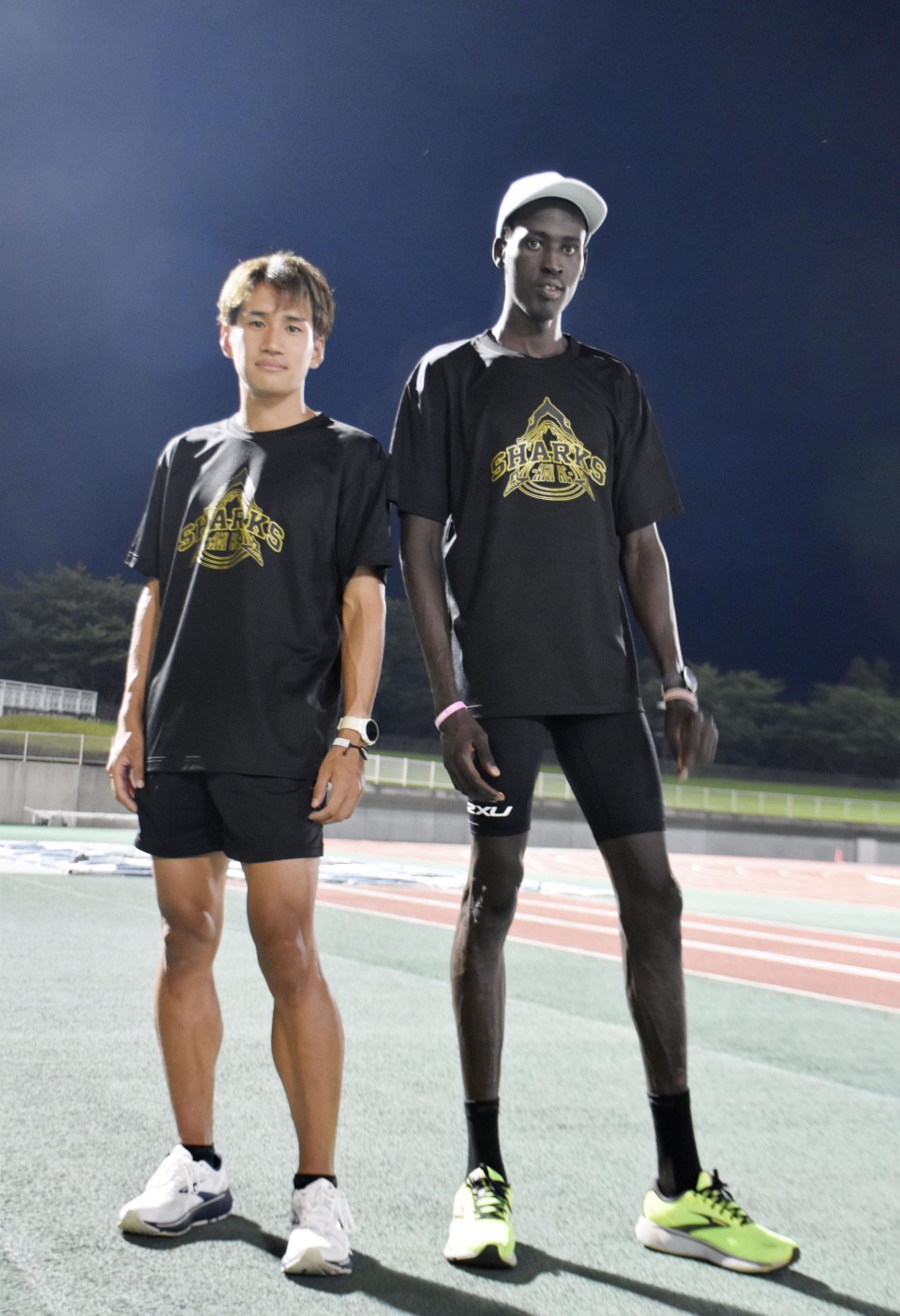 South Sudanese runner Abraham Guem (R) and Japanese runner Yasunari Kusu pose for a photo in the city of Fukushima in July 2022. (Kyodo)

A serious competitor, the 29-year-old Kusu recalled reading about Guem, who is carrying the hopes of his nation, which won independence in 2011 but plunged into bloody civil war between 2013 and 2018.

Guem's story moved Kusu's heart at a time when there were questions within Japanese society over Tokyo hosting the Olympics amid a pandemic. He decided to visit Maebashi to meet Guem and the pair trained together in February 2021.

After hearing that Guem had said it was better to hold the Olympics "for the sake of peace," Kusu wanted to help his fellow athlete achieve his aspirations, and after that served as a pacemaker at competitions during the run-up to the Tokyo games.

Guem first came to Japan in November 2019 for a training camp in Maebashi, where the donation-funded stay stretched to over 20 months when the Olympics were postponed due to the pandemic.

During that time, the five-member South Sudan delegation attended Japanese lessons and engaged in occasional cultural exchanges with locals, backed by the Japan International Cooperation Agency, which has been promoting peace through sports in South Sudan.

This past July, a smiling Guem was running and crossing the finish line with children at an athletics event, a kind of sporting interaction that had largely been prohibited to prevent the spread of COVID-19. 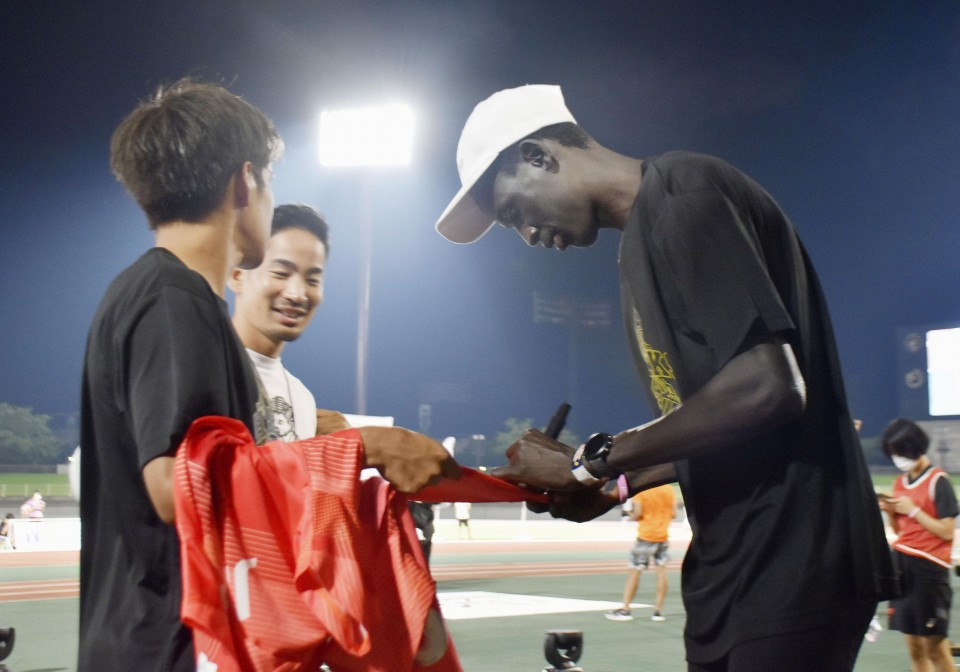 Now accustomed to riding trains and living on his own in Tokyo, Guem enjoys training as well as coaching athletic classes as another significant stage awaits him and his country, the 2024 Paris Olympics.

Inspired to set up a school in South Sudan where "children can study and learn sports free of charge," Guem also has the chance to present his nation with both hope and a successful model by making a living as a professional athlete.

Kusu knows his journey with Guem has only just begun and they are running in the right direction.