An exhibition will open at Stonehenge on Friday, showing the remarkable similarities between prehistoric cultures in Britain and Japan.

The exhibition will feature over 80 Japanese artifacts, none of which have been displayed in Britain before, including a 5,000-year-old Jomon Flame Pot, according to English Heritage, the body which cares for Stonehenge.

"Circles of Stone: Stonehenge and Prehistoric Japan" is Britain's first ever exhibition about Japanese stone circles and will also feature fragments of clay figurines, called dogu in Japanese, which have been found at stone circles and are thought to have been used in fertility or healing rituals. 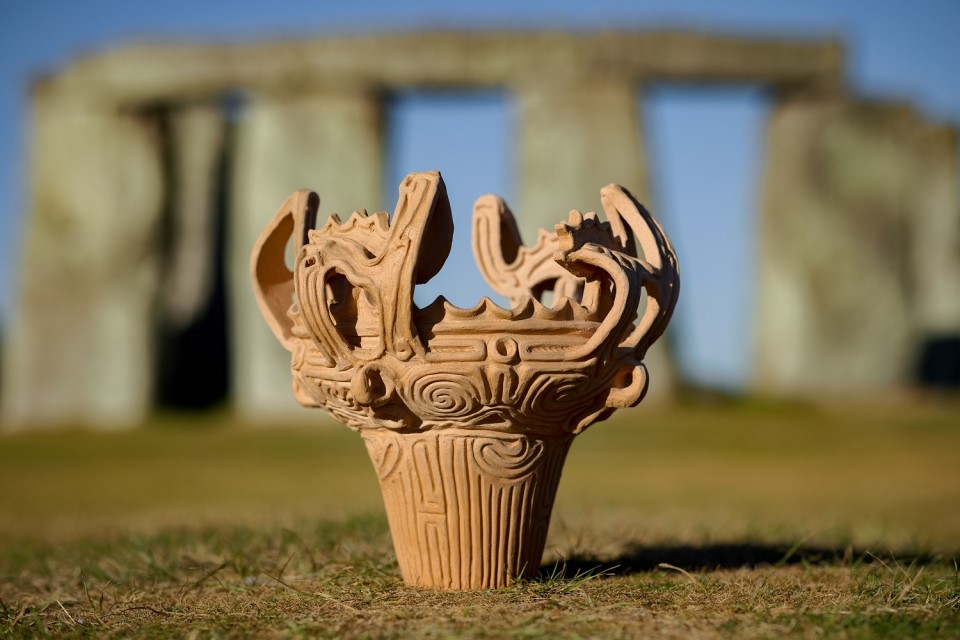 Photo taken on Aug. 10 shows a replica Jomon Flame Pot placed on the ground in front of the Stonehenge monument. A new exhibition at Stonehenge will examine Japan's prehistoric communities. (Photo courtesy of English Heritage)(Kyodo)

The exhibition aims to show visitors the story of Japan's prehistoric lifestyles and stone circles from the same time that Stonehenge was built and used.

Martin Allfrey, senior curator for English Heritage, said, "Exploring what is happening elsewhere in the prehistoric world is key to understanding the significance of Stonehenge.

"It's tantalizing to look at what these extraordinary objects from Japan tell us about the similarities between these two communities who, while thousands of miles apart, were perhaps ideologically closer than one might imagine." 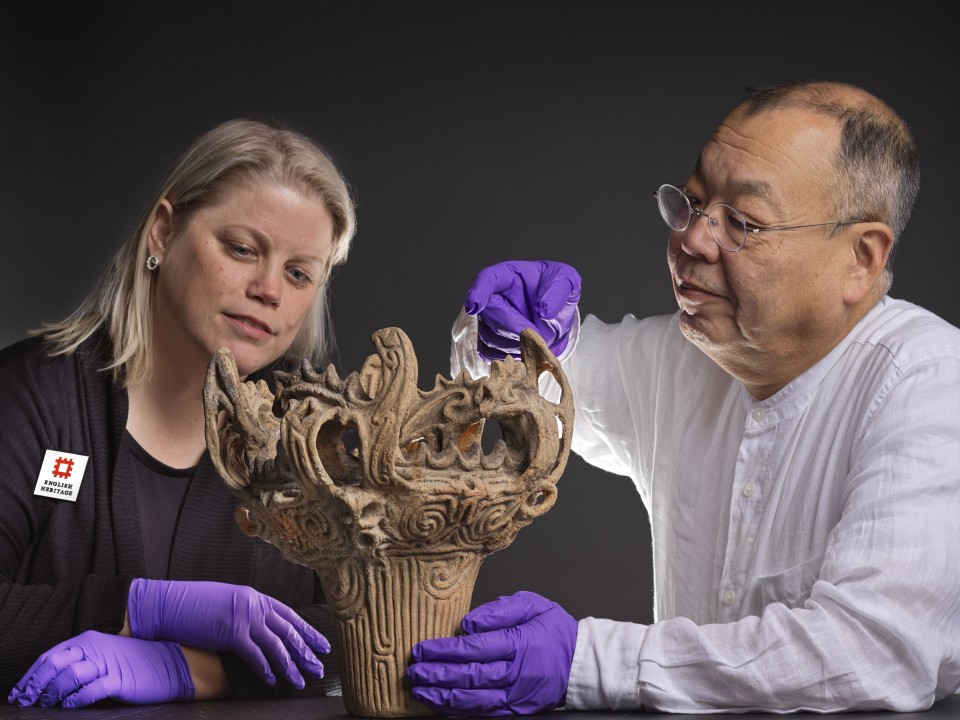 This photo taken on Sept. 21 shows Melanie Coussens (L), a manager at English Heritage, and Toru Miyao (R), curator at Niigata Prefectural Museum of History looking at a 5,000-year-old Jomon Flame Pot, which has been loaned by Umataka Jomon Museum for the exhibition. (Photo courtesy of English Heritage)(Kyodo)

Simon Kaner, executive director of the Sainsbury Institute for the Study of Japanese Arts and Cultures and director of the Centre for Japanese Studies at the University of East Anglia, said, "This exhibition presents little-known aspects of Japanese archaeology that demonstrate similarity and equally intriguing diversity at either end of Eurasia."

The Flame Pot, on loan from Umataka Jomon Museum in Nagaoka City, is designated as a national treasure. The shape of the pot is thought to represent blazing flames or possibly flowing water, according to English Heritage. It is the first time it has gone on display outside Japan.

The exhibition also explores the more recent connections between Stonehenge and Japan, including the work of late Japanese artist Yoshijiro Urushibara who made woodblock prints of Stonehenge. 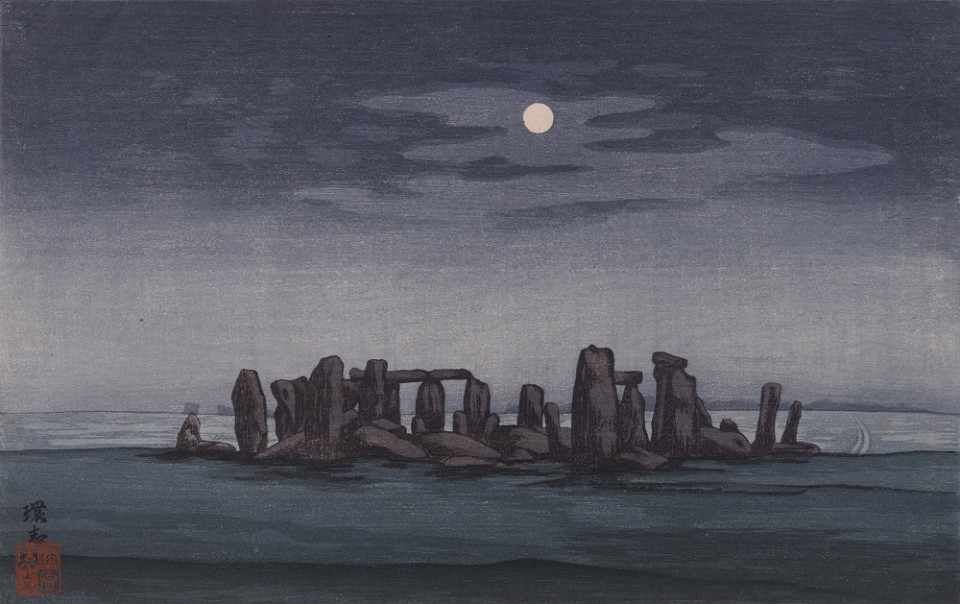 Photo taken on Aug. 4 shows a woodblock print of Stonehenge in moonlight by Japanese artist Yoshijiro Urushibara. The print, from Salisbury Museum, forms part of the new exhibition at Stonehenge that looks at Japan's prehistoric communities. (Photo courtesy of English Heritage)(Kyodo)

The display also pays tribute to William Gowland, sometimes referred to as "the father of Japanese archaeology." He worked in Japan from 1872 to 1888 and later worked on excavations at Stonehenge.

Stonehenge, situated in Wiltshire, southern Britain, is one of the world's most famous prehistoric monuments and was first built about 5,000 years ago. It is a UNESCO World Heritage Site.

Experts believe the site may have been used for religious purposes or large gatherings, or people may have used it to observe the sun or moon. Every year, people gather at the monument to celebrate the summer solstice.

The exhibition will run until August next year.