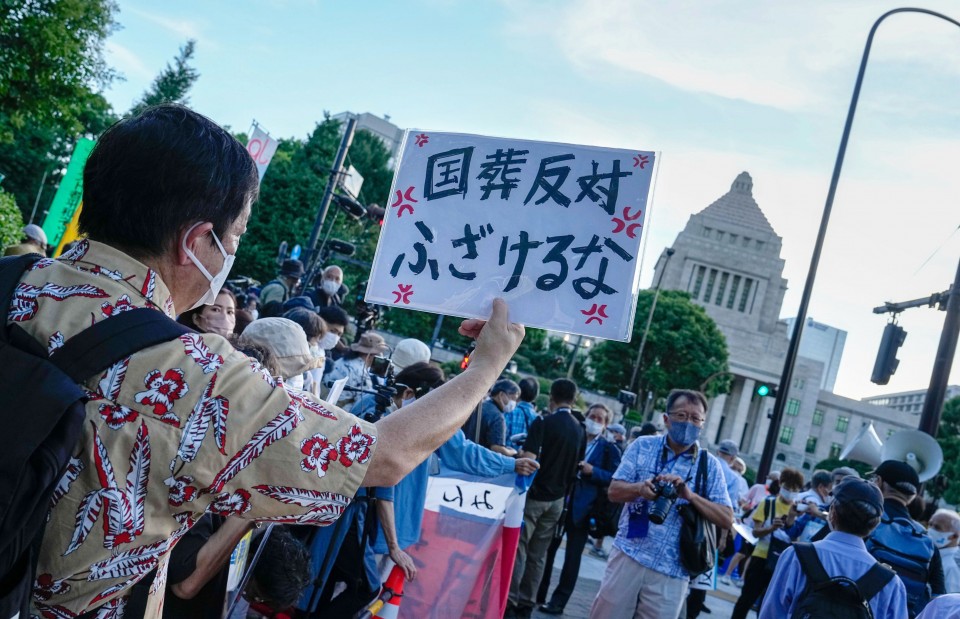 People stage a protest in front of the main gate of Japan's parliament building in Tokyo on Aug. 31, 2022, against the state paying for assassinated former Prime Minister Shinzo Abe's funeral. The public is split over the state funeral scheduled for Sept. 27, given Abe's divisive political legacy and scandals. (Kyodo) ==Kyodo

TOKYO - Japanese lawmakers and Taiwan's government have agreed to begin talks on how to evacuate Japan's citizens in the event of a possible Chinese invasion of the island, a politician said Thursday.

GENEVA - China may have committed "crimes against humanity" in its discriminatory treatment of Uyghur and other Muslim groups in the far-western Xinjiang autonomous region, a U.N. report found Wednesday, with the global body's human rights chief recommending measures to rectify the situation.

"The extent of arbitrary and discriminatory detention of members of Uyghur and other predominantly Muslim groups...in context of restrictions and deprivation more generally of fundamental rights enjoyed individually and collectively, may constitute international crimes, in particular crimes against humanity," the report said.

Tokyo prosecutors are investigating the purpose and the timing of the suspected payment to Mori, a former prime minister of Japan, who stepped down as head of the committee months before the Summer Games after it was revealed he made sexist remarks, the source said.

KUALA LUMPUR - A Malaysian court on Thursday sentenced the wife of former Malaysian Prime Minister Najib Abdul Razak to 10 years in prison and fined 970 million ringgit ($216 million) for seeking and receiving bribes in connection with a government supply contract.

Rosmah Mansor, 70, who is vilified in Malaysia for her lavish shopping sprees and opulent lifestyle, was convicted by the Kuala Lumpur High Court on counts of soliciting 187.5 million ringgit ($42 million) in 2016 and accepting 6.5 million ringgit from a contractor for helping it to secure a contract to install hybrid solar systems in rural schools.

The meeting will come as the South Korean Supreme Court is expected to decide soon if it finalizes a court order to liquidate assets seized from Mitsubishi Heavy Industries Ltd., one of two Japanese firms sued over alleged forced labor during Japan's 1910-1945 colonial rule of the Korean Peninsula.

ANAHEIM, California - Thriving in the heat of a big-name showdown, the Los Angeles Angels' Shohei Ohtani became the first Japan-born MLB player with two 30-home run seasons as he drove in the winning runs in Wednesday's 3-2 victory and a series win against the New York Yankees.

The three-game clash cast a spotlight on the top contenders for this year's American League MVP, Angels two-way star Ohtani and Yankees right fielder Aaron Judge. Both homered twice in the series, Judge's blast Wednesday being his MLB-leading 51st homer.

TOKYO - Powerful typhoon Hinnamnor brought strong winds to the southern Japan prefecture of Okinawa on Thursday as it regained strength while moving near the island region.

The Japan Meteorological Agency raised the classification of the storm to "violent" in the morning after downgrading it to "very strong" on Wednesday evening, warning of strong gusts and high tides in Okinawa.

TOKYO - Pretax profits among nonfinancial Japanese companies jumped 17.6 percent from a year earlier to a record 28.32 trillion yen ($203 billion) in the April-June quarter, government data showed Thursday, boosted by a weak yen and the waning impact of the COVID-19 pandemic despite surging commodity prices.

Capital spending gained 4.6 percent to 10.61 trillion yen, rising for the fifth straight quarter, after companies sought to increase output capacity and add equipment to cope with a recovery in demand, according to the Finance Ministry data.