Prime Minister Fumio Kishida pledged Friday to "fundamentally strengthen defense capabilities without excluding any options," as the government held its first meeting of an expert panel for Japan's defense buildup.

Kishida made the remark at the meeting of the panel, where about 10 experts exchanged views on how to increase Japan's defense capabilities while securing enough funds to boost its defense expenditures in response to worsening security situations under threats by China, North Korea and Russia.

The discussion at the panel will pave the way for updating of three key security-related government documents such as the National Security Strategy expected to be finalized by the year-end, in which acquiring so-called enemy base strike capabilities will likely be included. 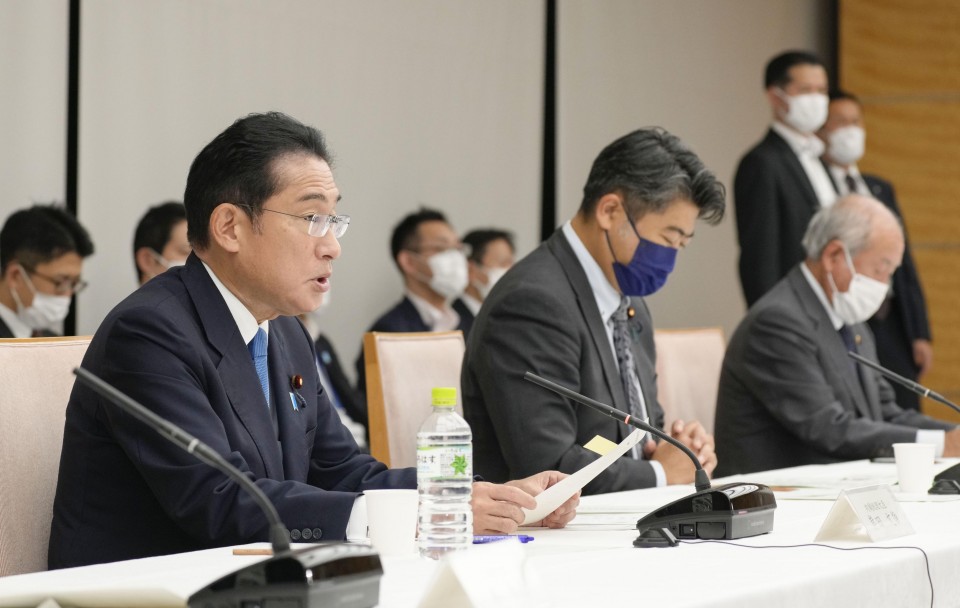 Prime Minister Fumio Kishida (L) addresses a panel of experts on Japan's defense buildup at his office in Tokyo on Sept. 30, 2022. (Kyodo)

Kishida underscored concerns over "a wide range of challenges" facing Japan, including improved nuclear-capable missiles and "attempts at unilaterally changing the status quo."

He was apparently referring to North Korea's nuclear and missile threats as well as Russia's invasion of Ukraine and China's growing maritime assertiveness in the Indo-Pacific region.

At the meeting, the Japanese leader also said that the nation, which is mired in public debt at more than twice the size of its economy, needs to be economically stronger to sustain increased defense expenditures, adding that "strengthening defense capabilities is not a tentative policy."

The panel consists of experts well-versed in defense policy or public finance and some related ministers, including Defense Minister Yasukazu Hamada and Foreign Minister Yoshimasa Hayashi.

Kenichiro Sasae, former Japanese ambassador to the United States who had also served as vice foreign minister, was chosen as the chairman of the panel.

The panel will hold several more meetings until early December to present a report to the government.

Kishida has pledged to realize a "substantial increase" in the defense budget, with his ruling Liberal Democratic Party having a goal of doubling Japan's defense spending to 2 percent or more of gross domestic product -- a level on a par with North Atlantic Treaty Organization member states -- over the next five years.

Known for its pacifist Constitution, Japan has long capped its annual defense budget at around 1 percent of GDP, or over 5 trillion yen ($35 billion).