Japan's imperial family, politicians and public mourned Britain's Queen Elizabeth II on Friday, a day after she died at the age of 96, with Prime Minister Fumio Kishida lauding how she "contributed significantly" to strengthening bilateral relations, including through her 1975 visit to the country.

A statement from Emperor Naruhito conveyed by the Imperial Household Agency exalted the queen's life of service, saying, "I express my heartfelt sorrow and deep sadness. From my heart, I declare my gratitude and esteem for her many achievements and contributions."

His message also reflected on warm meetings he enjoyed with the monarch when studying at Oxford and on visits to Britain, and conveyed his and Empress Masako's deep gratitude to the British royal family for being the first to extend an invitation for a state visit following his accession to the Chrysanthemum Throne in May 2019. 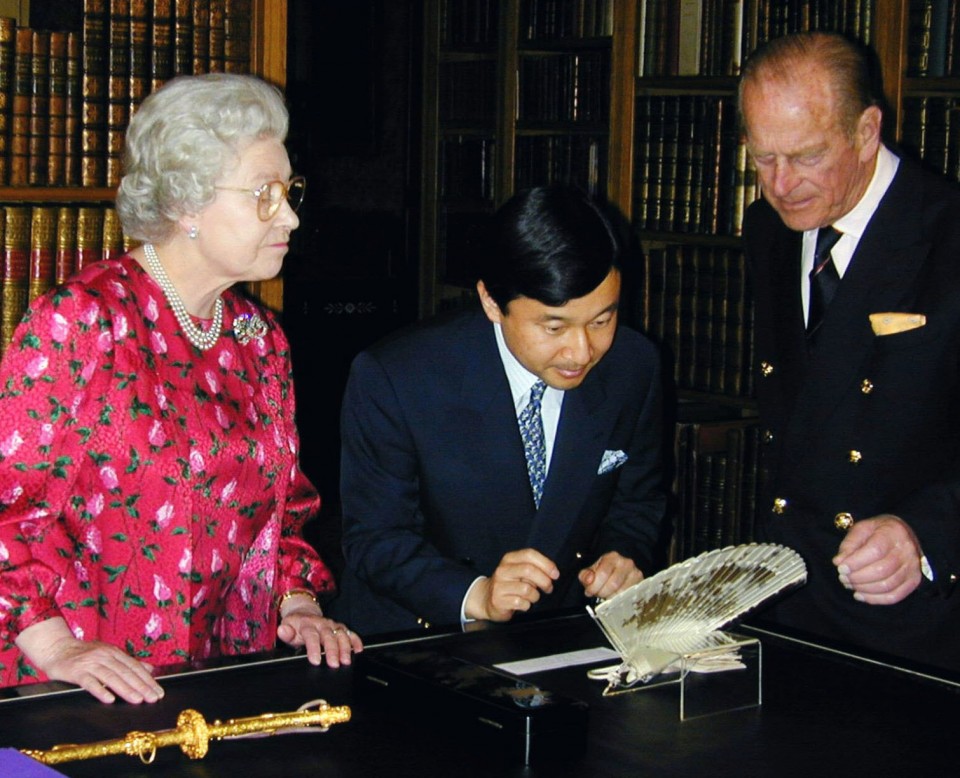 File photo taken in May 2001 shows Britain's Queen Elizabeth II and Prince Philip explaining to Japanese Crown Prince Naruhito about items related to the Japanese imperial family at the Royal Library at Windsor Castle. Prince Philip has died at the age of 99, Buckingham Palace said on April 9, 2021. (Kyodo) ==Kyodo

The planned visit has been postponed due to the coronavirus pandemic.

The emperor also sent condolences from him and the empress to the queen's son, who immediately became King Charles III upon her passing.

In remarks to reporters at his office, Kishida said the queen "contributed significantly to the strengthening of Japan-United Kingdom relations in particular." He said her passing "is a great loss not only to the people of the United Kingdom but also to the international community." 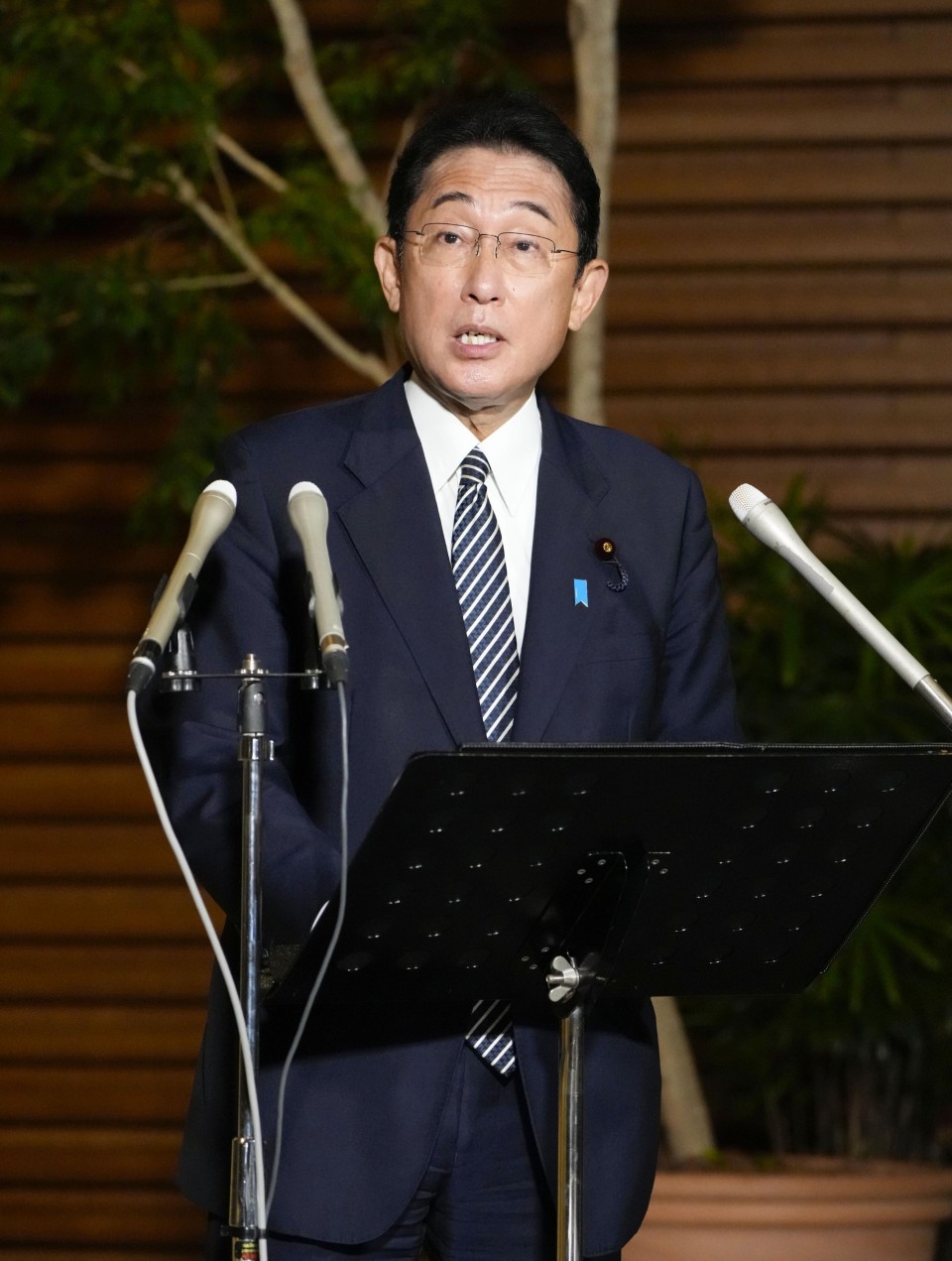 Prime Minister Fumio Kishida speaks to reporters at his office in Tokyo on Sept. 8, 2022. (Kyodo)

A state funeral is expected to be held for the late queen, whose reign spanning over 70 years made her Britain's longest-serving monarch. She was also one of the world's longest-reigning monarchs.

The government's top spokesman, Hirokazu Matsuno, told a press conference Japan will consider steps to take, including dispatching a special envoy, "based on announcements from the British government."

Foreign Minister Yoshimasa Hayashi also hailed the impact of the two nations' monarchies on bilateral ties, telling a news conference, "Japan-U.K. relations have developed with the support provided by the traditional friendship between the imperial and royal families."

Elizabeth II made the first visit to Japan by a British monarch in May 1975 and met Emperor Hirohito, posthumously known as Emperor Showa. 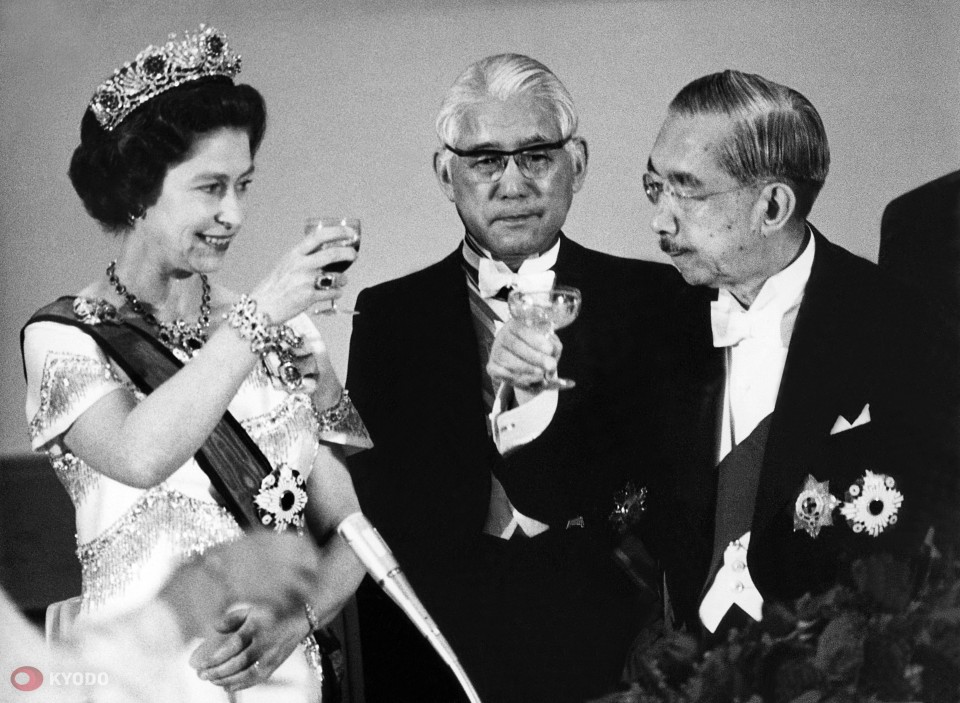 Photo taken in May 1975 shows Britain's Queen Elizabeth II (L) toasting with Japanese Emperor Hirohito during a state banquet at the Imperial Palace in Tokyo. (Kyodo)

Among the locations she traveled to on the state visit was Ise Jingu, a shrine in central Japan's Mie Prefecture dedicated to the Shinto sun goddess Amaterasu. The Shinto shrine's records say the queen took a keen interest in its construction, history and ceremonies and asked numerous questions.

She also went to Mikimoto Pearl Island, also in Mie, to witness the work of its famed female "ama" divers who swim the depths without scuba gear or tanks, hunting for pearls.

Kiyoo Matsuzuki, the now 70-year-old curator of the island's pearl museum who was among the party that greeted the queen, described feeling an "immense sadness over her death."

The water was cold on the day Elizabeth II visited, Matsuzuki said, adding that the queen became so concerned about the around 40 divers she was watching that she started urging them to come back up sooner.

The queen, a noted horseracing enthusiast, enjoyed deep ties with the Japan Racing Association, which has since 1976 held the annual Queen Elizabeth II Cup to commemorate her 1975 visit. The 2022 event set for Nov. 13 will no longer be named the "Platinum Jubilee" race commemorating her 70 years on the throne, the association said.

In a statement, JRA President and CEO Masayuki Goto said, "All of us who are involved in horseracing are immensely proud of the contribution and passion her majesty gave to horseracing, and the race that bears her name was loved the world over. We deeply mourn her passing."

At the British Embassy in Tokyo, the flag was flown at half-staff, and later Friday evening Kishida visited to pay his respects and sign a book of condolences.

People were also seen laying flowers outside the embassy. Among them was Kiyomi Fujii, a 55-year-old resident of Nagoya in central Japan, who happened to be in Tokyo visiting a British-themed fair at a local department store when she heard the news.

"She was a wonderful person who brought comfort to the people and never lost her sense of humor. I'll always remember the way that video at the London Olympics opening ceremony made it look like she was skydiving," a tearful Fujii said after offering flowers.

Queen Elizabeth, one of world's longest-reigning monarchs, dies at 96