Japanese and Chinese leaders exchanged messages to mark the 50th anniversary of the normalization of diplomatic ties on Thursday, with little mood for a grand celebration as tensions remain over a territorial row and a deepening rift between Beijing and Western nations over Taiwan.

Kishida talked with Xi on the phone days after he became prime minister in October 2021, but Japanese and Chinese leaders have not held a formal summit for around three years due largely to the outbreak of the coronavirus, first detected in China.

The premier said Japan, a close U.S. security ally, is eager to have "constructive and stable" ties with China for the "peace and prosperity of the region and the world," although the two nations are facing many challenges. 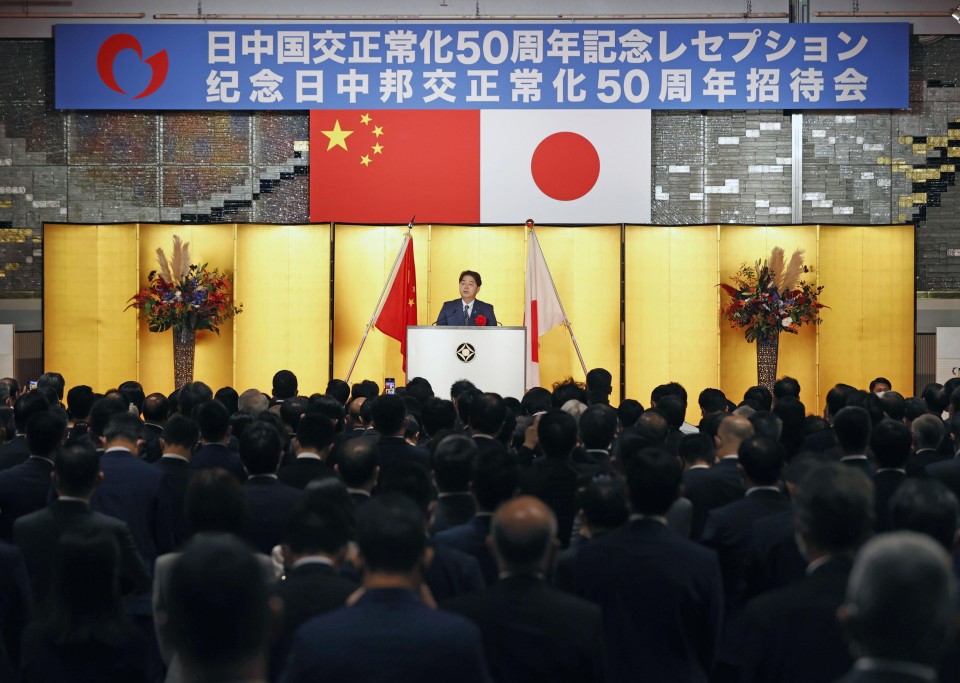 Japanese Foreign Minister Yoshimasa Hayashi makes a speech during a reception at a hotel in Tokyo on Sept. 29, 2022, marking the 50th anniversary of the normalization of diplomatic ties between Japan and China. (Kyodo)

Xi said Beijing will deepen cooperation with Tokyo in every field to answer the needs of a "new era," while stressing China "very much" emphasizes the development of Sino-Japanese relations.

Japan and China exchanged similar messages in 2017 to celebrate the 45th anniversary. They did not do so in 2012 on the occasion of the 40th anniversary because of a flare-up in a territorial spat.

On Thursday, Japanese Foreign Minister Yoshimasa Hayashi, who attended the Keidanren event with Kishida absent in apparent consideration of the strained bilateral ties, said in a speech that Tokyo and Beijing have a "responsibility for peace and prosperity in the region."

Despite several political disputes, Japan and China have boosted economic relations throughout the past 50 years and China is now Japan's biggest trading partner.

Masakazu Tokura, chairman of Keidanren, said at the beginning of the event, "For Japan, the relationship with China is one of the most important bilateral relationships."

"The flow of people between Japan and China has stalled against a backdrop of the coronavirus pandemic and international affairs have been getting more complex and opaque," he said.

"Exactly because of such situations, however, proactive high-level exchanges, including those between leaders of the two nations, are needed," Tokura added.

Among 850 attendees of the Keidanren event were former Japanese Prime Minister Yasuo Fukuda and Chinese Ambassador to Japan Kong Xuanyou, the organizer said.

In Beijing, a reception commemorating the 50th anniversary was also held at the Diaoyutai State Guesthouse, with senior Chinese officials and Japanese Ambassador to China Hideo Tarumi attending.

Tarumi, a "China School" diplomat, said in his speech at the reception in the Chinese capital that bilateral relations "tend to get caught in a negative spiral."

Japan-China ties are "in the severest situation since the normalization of the diplomatic relations," given that restrictions in people-to-people exchanges have hindered the development of mutual trust, he said.

Foreign affairs experts said Japan is required to pursue a well-balanced diplomatic strategy toward Beijing for stability in the region, as Xi is set to secure a controversial third term as leader at the once-in-five-years congress of the ruling Communist Party in October.

Kishida has expressed willingness to hold a meeting with Xi in the not-so-distant future, with the Japanese government trying to organize it on the sidelines of international conferences such as the Group of 20 summit in Indonesia in November.

Bilateral relations remain precarious with continued tensions over the Japan-controlled, China-claimed Senkaku Islands in the East China Sea inflaming the situation, as are issues related to Taiwan.

Ties between Tokyo and Beijing sharply deteriorated after the Japanese government purchased a main part of the Senkakus, called Diaoyu in China, from a Japanese individual in September 2012.

In August this year, Beijing conducted large-scale military drills near Taiwan in response to U.S. House of Representatives Speaker Nancy Pelosi's visit to the island. Some of the ballistic missiles fired during the exercises fell in Japan's exclusive economic zone. 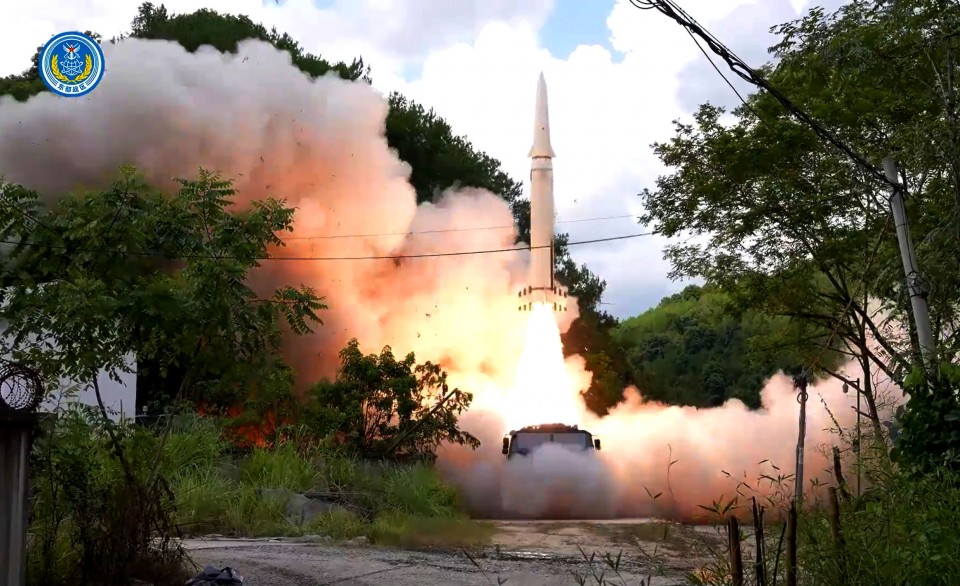 On Sept. 29, 1972, then Japanese Prime Minister Kakuei Tanaka and then Chinese Premier Zhou Enlai signed a joint communique in which the governments of the two countries agreed to "establish relations of perpetual peace and friendship."

In line with recognizing the Communist-led People's Republic of China as the "sole legal government" of China, Japan severed diplomatic relations with self-ruled democratic Taiwan, formally called the Republic of China. 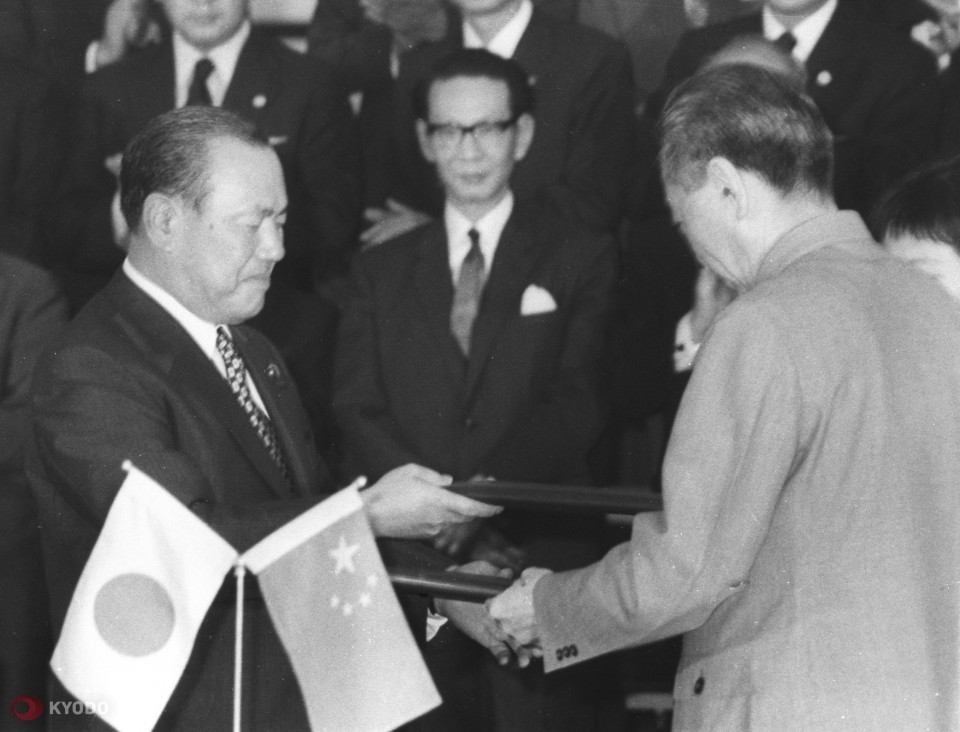 File photo taken on Sept. 29, 1972, shows then Japanese Prime Minister Kakuei Tanaka (L) and then Chinese Premier Zhou Enlai exchanging documents after signing a joint communique in which the governments of the two Asian countries agreed to "establish relations of perpetual peace and friendship." (Kyodo)

Beijing and Taipei have been governed separately since they split in 1949 as a result of a civil war. China regards Taiwan as a renegade province to be reunified with the mainland, by force if necessary.

China's economy rapidly grew under its "reform and opening-up" policy launched in 1978 and the country overtook Japan as the world's second-biggest economy in 2010, with its gross domestic product ballooning to 3.6 times that of Japan by 2021.

Due partly to the COVID-19 pandemic, official in-person meetings between leaders of Japan and China have not been held since December 2019, when Abe held talks with Chinese Premier Li Keqiang. In their phone conversation, Kishida and Xi agreed to seek "constructive and stable" relations.

Japan must not "obscure" stance on Taiwan issue: China's Wang