A group of Japanese environmentalists conducted a weeklong sea kayak eco-tour over the summer to collect garbage that had washed ashore on the Shiretoko Peninsula in Hokkaido, putting people power to work in preserving the precious World Heritage site.

The tide carries massive amounts of ocean debris and accumulates along the craggy peninsula that juts out into the Sea of Okhotsk. Although local governments and others are involved in current cleanup efforts, it has been rough going due to the delicate operation needed to protect the environment from further human damage.

On the eve of June 22, about a dozen participants of the eco-tour organized by local nonprofit Shiretoko Nature School collected garbage that had washed ashore on the coast near Kashuni Falls, a tourist attraction on the western side of the peninsula.

"I was surprised that there was so much garbage," said Raisuke Nishiya, 50, who traveled from Miyagi Prefecture in northeastern Japan, and was among the volunteers who used kayaks to collect plastic bottles, bouys and other ocean waste at a collective rate of roughly 50 kilograms per 10 minutes. 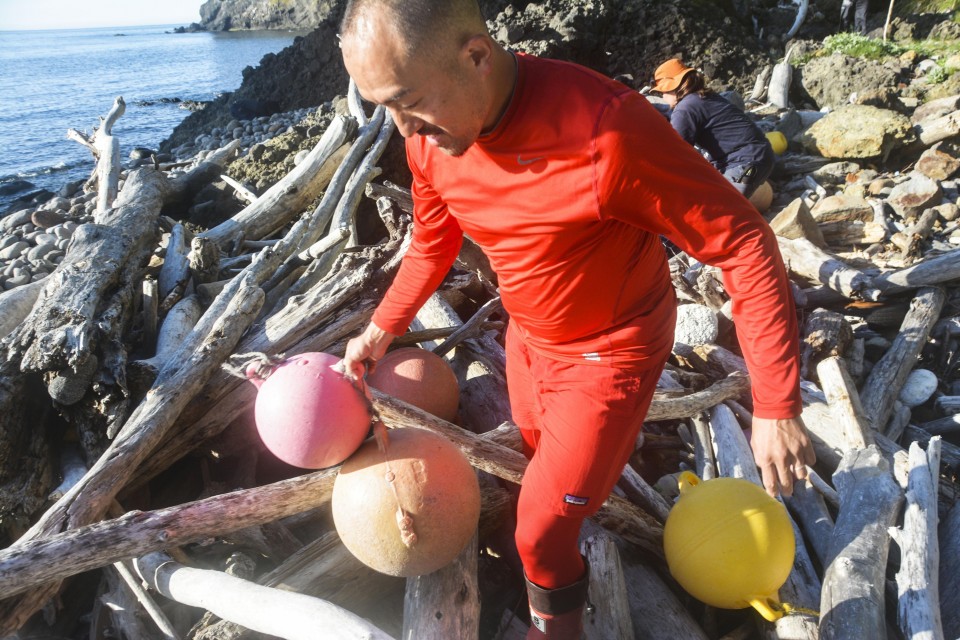 A group of environmentalists who participated in a kayaking eco-tour collects garbage near Kashuni Falls, a tourist attraction on the western side of the Shiretoko Peninsula on Japan's northernmost island of Hokkaido on June 22, 2022. (Kyodo)

On April 23, a Japanese tourist boat carrying 26 passengers and crew sank in an accident in the same area. "It's a small consolation as a memorial, but I also wanted to clean up if even a little (for the victims)," said Yoshiyuki Yabe, who also came from Miyagi.

The Shiretoko Peninsula is about 65 kilometers long and sticks out into the southern tip of the Sea of Okhotsk. Garbage is dragged by the current and lands predominantly on the western coast -- especially around Shiretoko Cape -- leaving piles of debris as an unsightly blemish on the scenery.

The peninsula was registered as a World Heritage site in 2005. To protect the natural surroundings from human damage and destruction, there are no roads for vehicles to the cape, and motorized boats are prohibited from docking there.

According to Shiretoko Nature School's Nao Sekiguchi, since the only way to get to the cape "is by either walking overnight on a steep hiking trail or by using an unpowered boat," collecting large amounts of garbage is a difficult task. 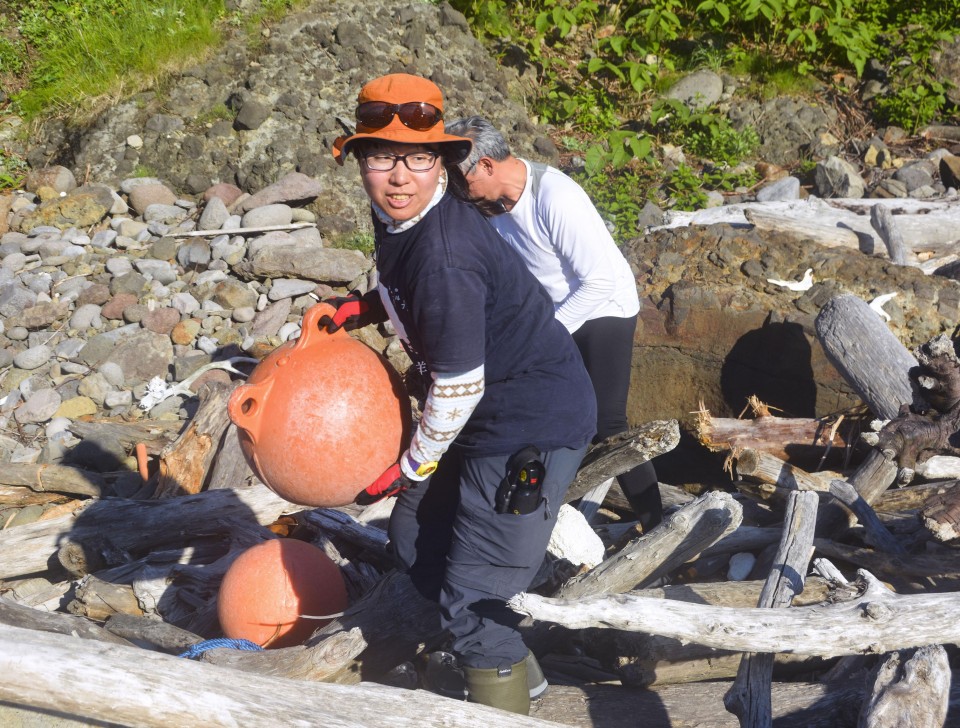 Shiretoko Nature School's Nao Sekiguchi helps collect garbage near Kushuni Falls, a tourist attraction on the western side of the Shiretoko Peninsula on Japan's northernmost island of Hokkaido on June 22, 2022. (Kyodo)

The town of Shari and the environment ministry recruits volunteers to continue collecting waste, but an official at the ministry's Utoro Nature Conservation Office said, "No matter how much we collect it quickly builds back up."

The environmentalist organization, which said it could no longer look on silently at the sorry state of affairs, used a subsidy from the environment ministry to conduct the 7-night, 8-day sea kayaking tour from Utoro on the peninsula's western coast to Shiretoko Cape, collecting waste near the cape and transporting it onto a small chartered boat.

The garbage will be processed into accessories and other items and sold, with proceeds going toward similar kayak eco-tours in the future.

Not only does the cleanup help maintain the natural beauty of Shiretoko, but it "is also important to maintain the heritage registration," said an environment ministry official. 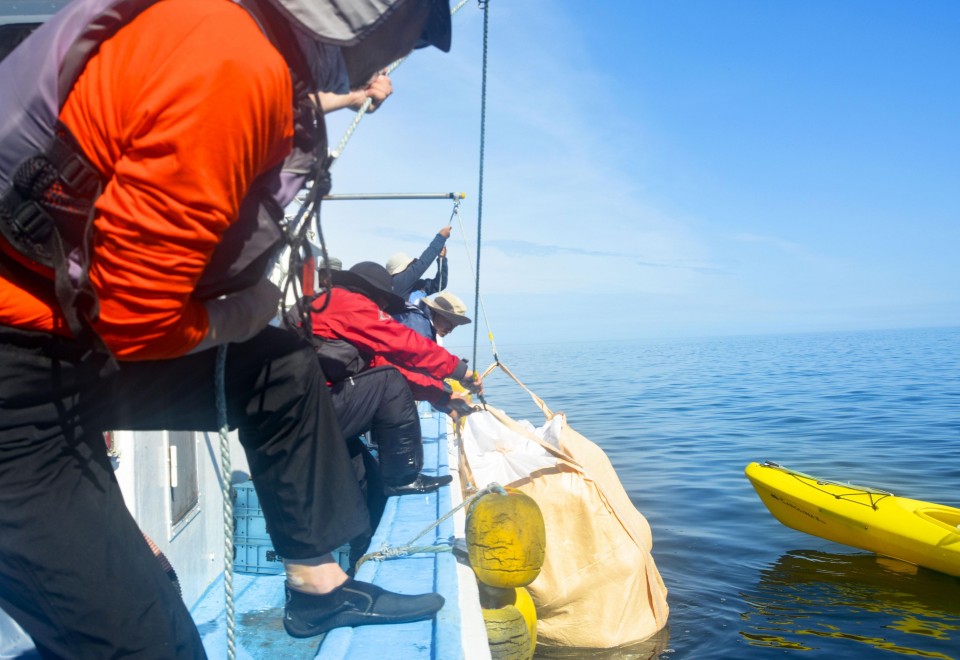 A group of environmentalists who participated in a kayaking eco-tour to collects garbage near Kushuni Falls, a tourist attraction on the western side of the Shiretoko Peninsula on Japan's northernmost island of Hokkaido, hauls ocean debris onto a small chartered boat on June 23, 2022. (Kyodo)

Like Shiretoko, the Ogasawara Islands in Tokyo and Yakushima Island in Kagoshima Prefecture -- both World Heritage Sites -- also have ocean waste problems. By holding cleanup events and asking volunteers to collect garbage, they strive to balance nature conservation with the preservation of the landscape.

Associate Professor Takayuki Shiraiwa, who studies Shiretoko's garbage problem at the Institute of Low Temperature Science at Hokkaido University's geography department, said, "Shiretoko presents a special situation because it is a World Heritage Site where garbage cannot be collected carelessly."

He added, "Although a fundamental solution is quite difficult, it is necessary to share awareness of this problem widely."