Japan on Tuesday began its rollout of vaccines against the Omicron coronavirus variant as part of efforts to stem the ongoing seventh wave of COVID-19 infections in the country.

Those aged 60 and older and medical workers yet to receive their fourth shots will be given priority, with eligibility to be expanded from around mid-October to those aged 12 and above and vaccinated at least twice. The government also plans to start workplace vaccinations in late October.

The distribution of the updated vaccines comes as national infection numbers continue on a downward trend from their August peak. 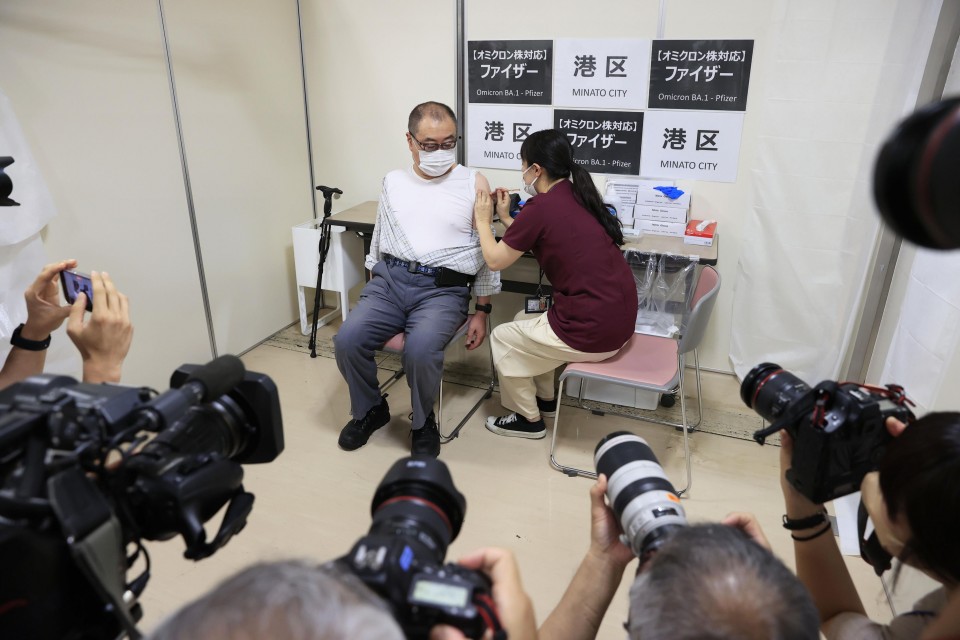 The central government plans to provide the shots, which are free of charge, to all who want them by the end of the year, ahead of the highly infectious year-end and New Year period. Local governments will be able to bring forward the scheduling at their discretion.

The boosters, which are made by U.S. pharmaceutical firms Pfizer Inc. and Moderna Inc. and tailored to the BA.1 subvariant, were approved for production and sale in Japan by the health ministry last week.

According to a Kyodo News survey, 80 percent of the capital cities of the nation's 47 prefectures have said they would begin vaccinations by the end of this month.

The rollout arrives as Japan's seventh wave of coronavirus infections, largely fueled by the BA.5 subvariant, shows signs of subsiding.

While the country saw record daily infections of around 261,000 in mid-August, Tuesday's total of about 31,700 was also the lowest since early July.

The government has said it aims for municipalities to administer over 1 million shots daily between October and November.

It intends to "accelerate the pace of inoculations" and is "preparing a system to handle over 1 million shots a day," Health, Labor and Welfare Minister Katsunobu Kato told a press conference.

The health ministry is urging the public to take the vaccine, also expected to be effective against the now-prominent BA.5 subvariant, when it becomes available, and is also considering the introduction of products adapted to the new subvariant.

On the first day of inoculations at a vaccination venue in Tokyo's Minato Ward, Masahiko Miura, 76, said he canceled his fourth shot of the conventional vaccine to get the new Omicron-tailored version.

"I thought it would be best to get the one for the strain currently around. It doesn't mean I'm not going to get infected, but I've come here to get vaccinated so I don't spread it to others," he said.

People will be able to take the booster once five months have elapsed since their previous shot. But as some countries require an interval of three months or less, the ministry is considering shortening the gap and will make a decision by late October.