Japan has welcomed more than 1,800 evacuees since Russia's war against Ukraine began over six months ago, in an uncharacteristic move for a country with a typically poor record accepting people seeking asylum.

On March 1, just five days after the launch of the invasion, Justice Minister Yoshihisa Furukawa told senior immigration officials and others in his office that Japan "has a responsibility to act in this historic moment."

Since then, the policy, announced by Prime Minister Fumio Kishida the next day, has been spearheaded by the ministry's Immigration Services Agency. 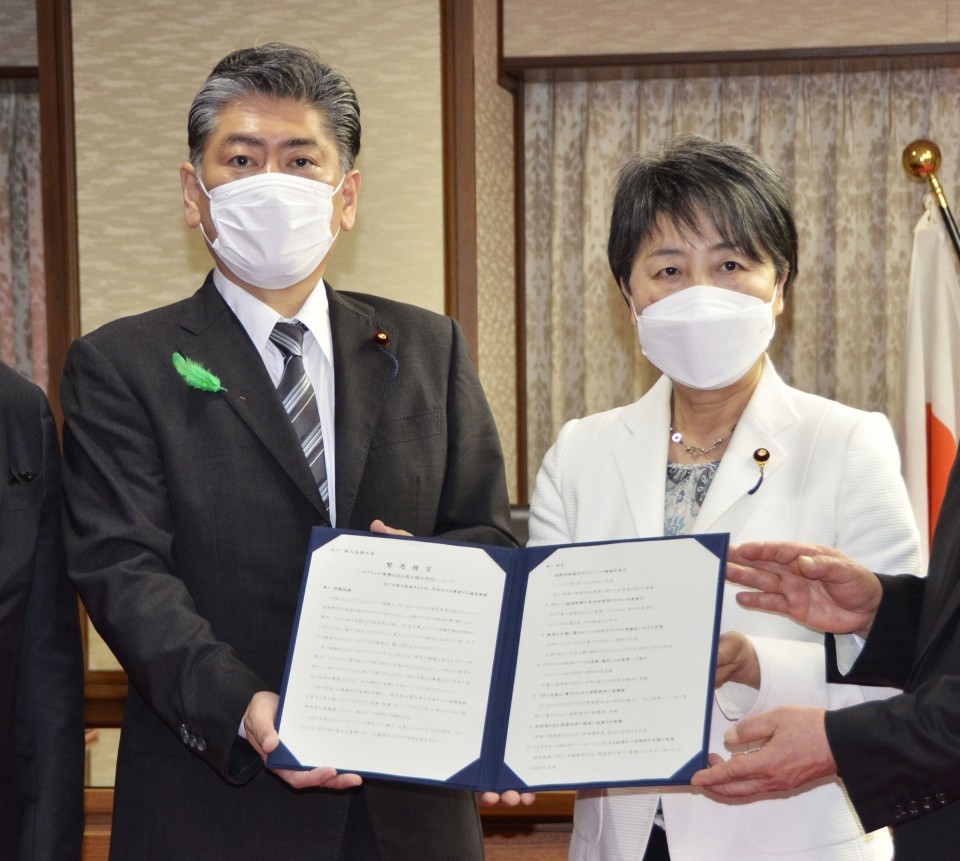 Then Justice Minister Yoshihisa Furukawa (L) and his predecessor Yoko Kamikawa hold up the proposal to support Ukrainian evacuees, at the Justice Ministry in Tokyo on April 21, 2022. (Kyodo)

One official recalled that Japan's quick decision to accept people from Ukraine using a government plane was a sort of an "unprecedented mission," and interviews with those involved revealed that the initiative was propelled by the incumbent and previous justice ministers.

In the immediate aftermath of Russia's assault, while numerous countries were expressing solidarity with Ukraine, the question being asked in Japan was which ministry would handle accepting people fleeing the war. One government official even said the Foreign Ministry was "passive" on the issue.

It was then that House of Representatives lawmaker and three-time former Justice Minister Yoko Kamikawa went to the prime minister's office to petition that Ukrainians be accepted.

Like his predecessor, Furukawa also saw in the invasion a threat to the international rules-based order.

A liaison and coordination committee headed by the government's top spokesperson became the initiative's central command, with officials from various immigration agency departments brought together to establish a project team.

But it was the April 5 arrival of a government plane carrying Foreign Minister Yoshimasa Hayashi and 20 evacuees from Poland that pushed the policy into the public consciousness. 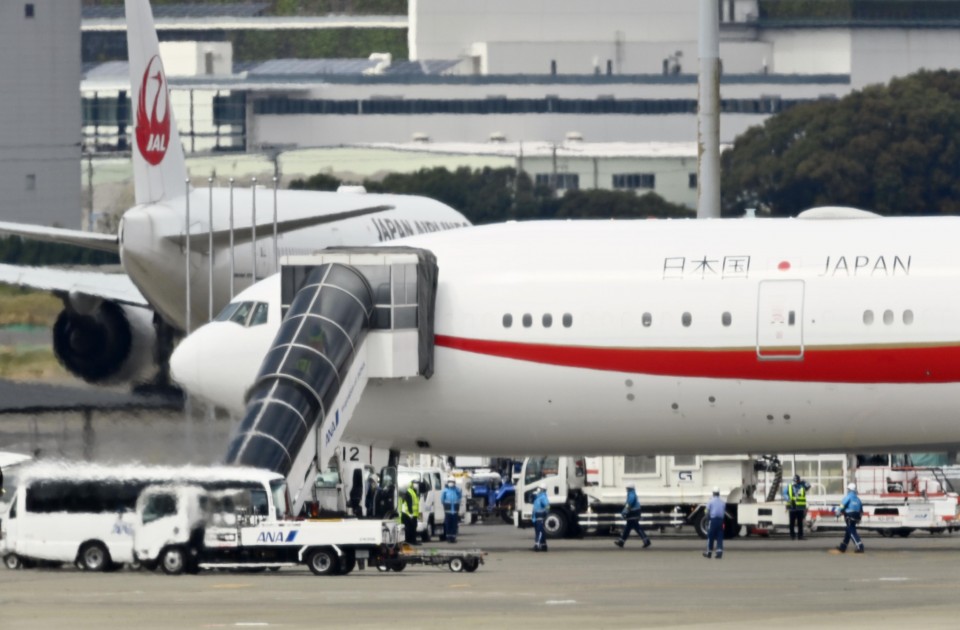 A government plane carrying evacuees from Ukraine to Japan is seen after landing on the tarmac at Tokyo's Haneda Airport in April 2022. (Kyodo)

The fact-finding visit ending with the evacuee flight to Japan was originally devised with Furukawa going as a special envoy, but he had to pull out at the eleventh hour when a family member contracted the coronavirus.

When it came to actually trying to plan the trip, the government also faced logistical and timing issues, some for the very first time, including on how to deploy a government plane to carry numerous evacuees.

Still, a senior immigration official who reflected on the feeling when the plane's return to Tokyo's Haneda airport said the moment was not especially triumphant. "There were still many people facing danger, it was like it was just a checkpoint on the way," the official said.

Meanwhile, at the immigration agency's new consultation desk for entities to offer evacuees support, private companies and local governments looking to provide aid lit up the phones. The agency continues to assign evacuees without guarantors or individuals they can rely on in Japan with suitable matches.

"It was like we were real estate agents," one official said, referring to how government employees photographed the interiors of numerous properties for evacuees to live in. Among the requests officials received on living environments were for "somewhere warm" and "a place without insects."

As of Aug. 24, the government has had 1,762 applications to provide aid, and it has successfully moved 66 households comprising 109 people to places of their choosing. 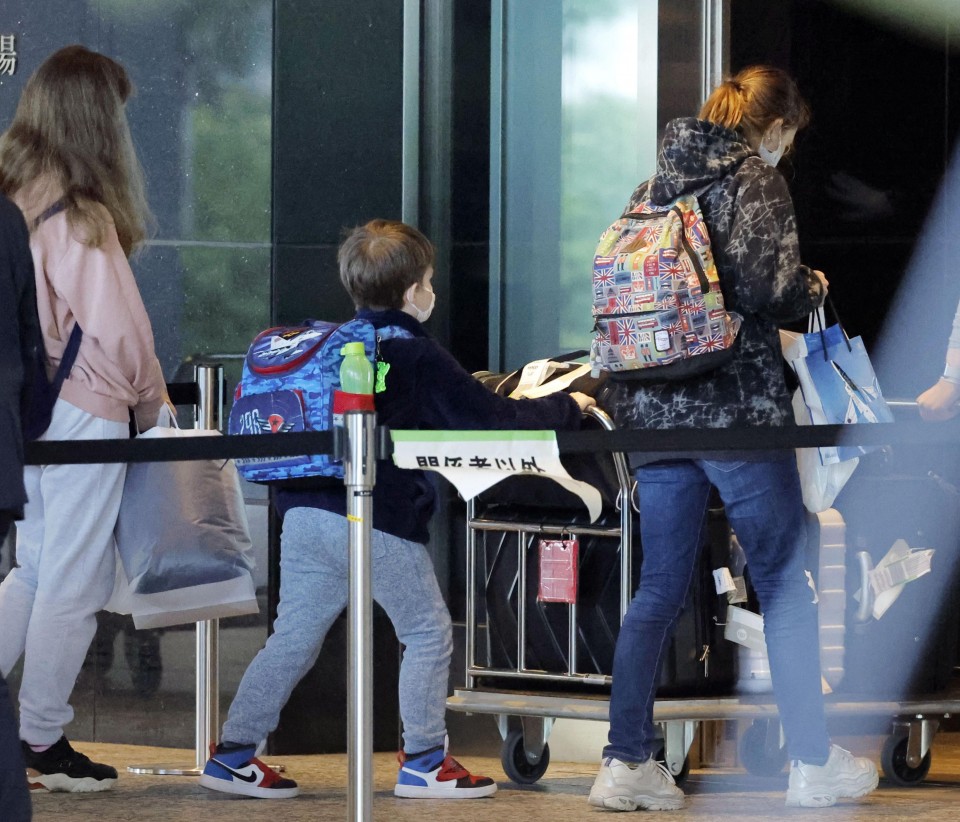 Ukrainian evacuees enter a hotel in Tokyo after arriving in Japan in April 2022. (Kyodo)

But while Japan's approach to supporting evacuees has been praised, debate has now turned to its treatment of refugees, in part because the Ukrainians are defined as evacuees, rather than having been accepted based on the Refugee Convention.

Japan's acceptance rate for refugees is low, with just 74 people approved for the status in 2021.

In the Diet, politicians have questioned the government's decision to make the Ukrainians evacuees, and questions have been asked why people from Myanmar were not afforded similar treatment after a military coup overthrew its democratically-elected government in February 2021.

The government was initially expected to resubmit amendments to the immigration law at an extraordinary parliament session scheduled for the fall, but sources said earlier this month it would be delayed as more time is needed to craft the proposals.

With the proposed legal revisions already having been withdrawn once last year amid controversy over its provisions on foreigners kept in detention centers and deportations for repeat refugee status applicants, passionate debate is expected when the changes eventually face scrutiny again.

Among the anticipated changes is a complementary protection system, a form of which the European Union uses to give Ukrainians residence and employment rights in member states without making them refugees.

A senior Justice Ministry official said the government is working to clarify standards for refugee approval, and suggested the international situation could inform future debate.

"With an eye to a Taiwan contingency and what other events might happen, I hope this can be an opportunity to gain understanding on the need to provide a system for accepting evacuees," a senior Justice Ministry official said.