Daichi Kamada struck midway through the opening half and Kaoru Mitoma netted late off the bench as Japan tuned up for the World Cup in Qatar with a 2-0 win over the United States on Friday.

Japan's high pressing and quick movement on the counter posed problems for an American side missing one of its biggest names, Chelsea attacker Christian Pulisic, who was a late injury withdrawal from the friendly at Dusseldorf-Arena. 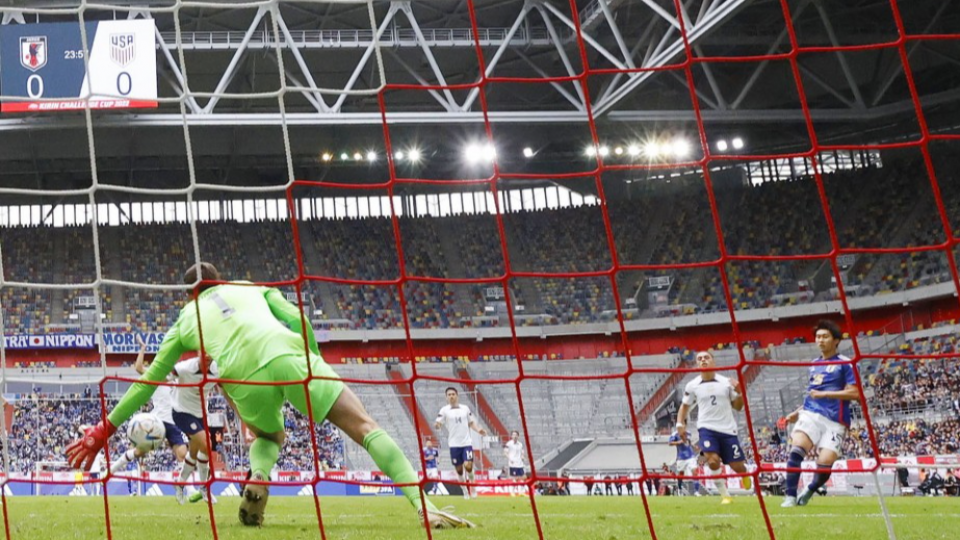 Daichi Kamada (far R) scores Japan's first goal against the United States during the first half of their football friendly held in Dusseldorf, Germany, on Sept. 23, 2022, as a warmup ahead of the World Cup finals in Qatar starting in late November. (Kyodo) ==Kyodo

Samurai Blue manager Hajime Moriyasu and counterpart Gregg Berhalter both experimented with lineups in preparation for the World Cup, where Japan will face Germany, Spain and Costa Rica in Group E, and the Americans will take on England, Wales and Iran in Group B.

Kamada, who has found the scoring touch early in the season for Europa League champions Eintracht Frankfurt, was denied an opener when American keeper Matt Turner reacted sharply to save his close-range attempt.

The 26-year-old attacker delivered a more ruthless finish after Sporting Lisbon midfielder Hidemasa Morita found him unmarked in front of goal in the 25th minute, but had to delay his celebration until the video assistant referee confirmed he was onside.

Kamada had several chances to add to his tally in the second half but was unable to find the target. 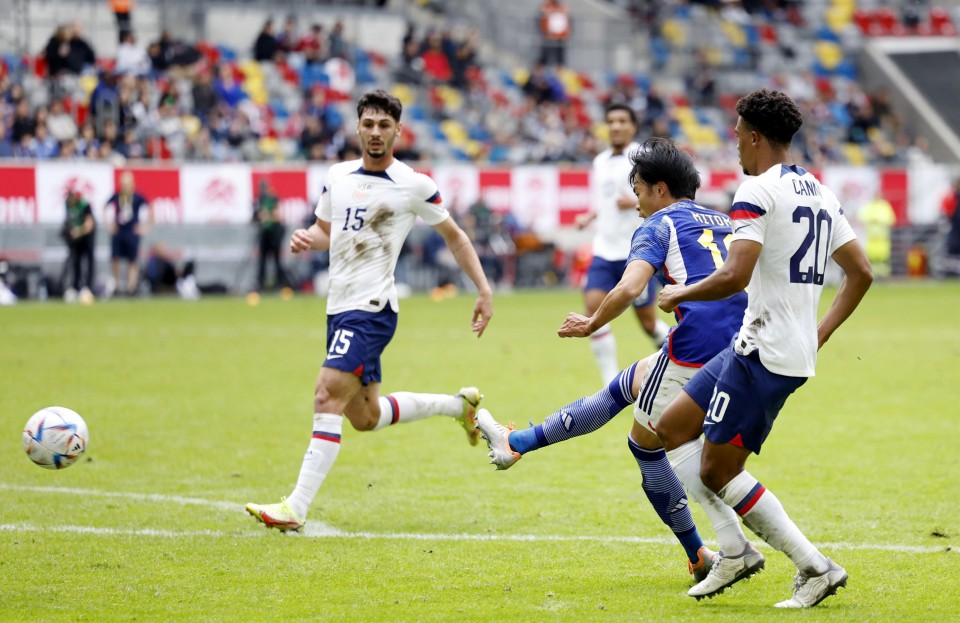 Kaoru Mitoma (2nd from R) scores Japan's second goal against the United States during the second half of their football friendly held in Dusseldorf, Germany, on Sept. 23, 2022, as a warmup ahead of the World Cup finals in Qatar starting in late November. (Kyodo) ==Kyodo

"It was good to score one goal, but things would be so much easier for us if we had scored our second goal earlier," Kamada said. "Whenever it is, if it's in Germany, scoring for the national team is special."

Brighton winger Mitoma, who relieved Real Sociedad's Takefusa Kubo in the 68th minute, doubled the lead with two minutes left to play, dribbling past multiple defenders down the left and curling a shot around the diving Turner.

Moriyasu, who faces a number of tough World Cup selection decisions, credited his players for taking control after adapting to the conditions of the game.

"Winning is important, but it was the way they played -- they communicated well about what they wanted to do," he said. "As the match went on, they made adjustments to things that hadn't worked well."

The Samurai Blue will face Ecuador in another friendly in Dusseldorf on Tuesday. They will kick off their World Cup campaign against Germany at Doha's Khalifa International Stadium on Nov. 23.