The number of babies born in Japan and to Japanese expatriates in the January to June period fell 5.0 percent from a year earlier to fewer than 400,000 for the first time since 2000, amid the lingering impact of the coronavirus pandemic, recent government data showed.

The number of births in the period suggests that the annual total in the world's third-largest economy is on track to drop below last year's 811,604 and under 800,000 for the first time since the government started compiling the data in 1899.

In the first six months of the year, 384,942 babies were born, down 20,087 from the same period last year, according to the preliminary data released by the Ministry of Health, Labor and Welfare on Sept. 4. 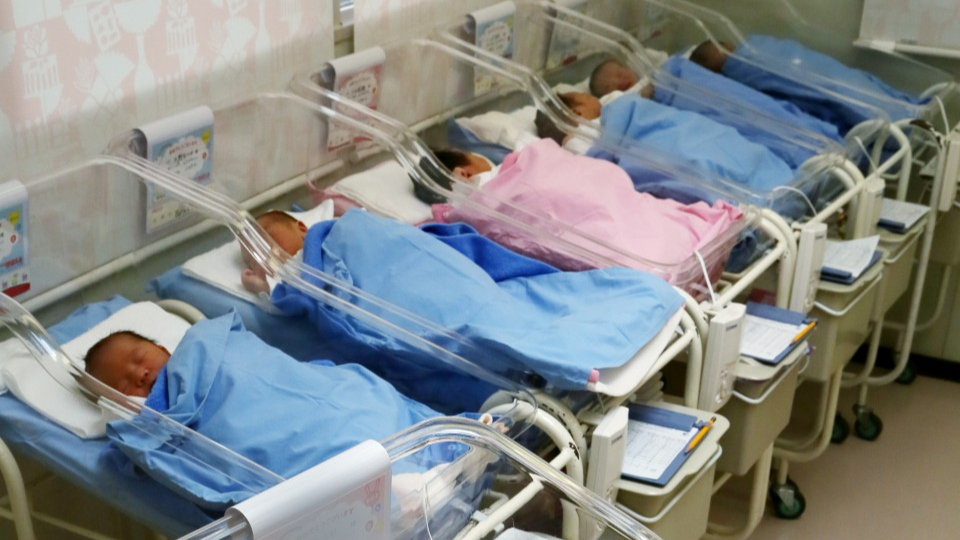 Newborn babies lie in the nursery ward of a hospital in Saitama Prefecture in February 2014. (Corbis/Getty/Kyodo)

The data include figures for Japanese nationals living abroad and foreigners residing in Japan.

The number of births in January increased from a year earlier but decreased in the following months through June.

A 2022 white paper on the declining birth rate released by the Cabinet Office said the spread of the novel coronavirus had weighed on the number of marriages and pregnancies, adding that people in their 20s and 30s had become more worried about marriage, income, jobs and families than other age groups compared with prior to the pandemic.

The number of marriages in the January-June period edged up 243 from the year before to 265,593, but the figure was still down by more than 50,000 compared with 2019, before the start of the global health crisis, according to the data.

The annual number of newborns, which has been on a downward trend since the middle of the 1970s, is declining faster than the government anticipated.

Fewer births are adding to pressure on the government, which is grappling with soaring social security spending to cover pensions and medical care for the elderly in the rapidly graying society.