On the first of three days of talks with overseas delegations, Kishida received a pledge from Vice President Kamala Harris that the United States would work with Japan if one of its closest U.S. allies faced security threats.

Harris' remarks come as the security situation in the Asia-Pacific region has been jeopardized by China's increasing assertiveness in nearby waters, including near the Japan-controlled Senkaku Islands, and North Korea's nuclear and missile development. 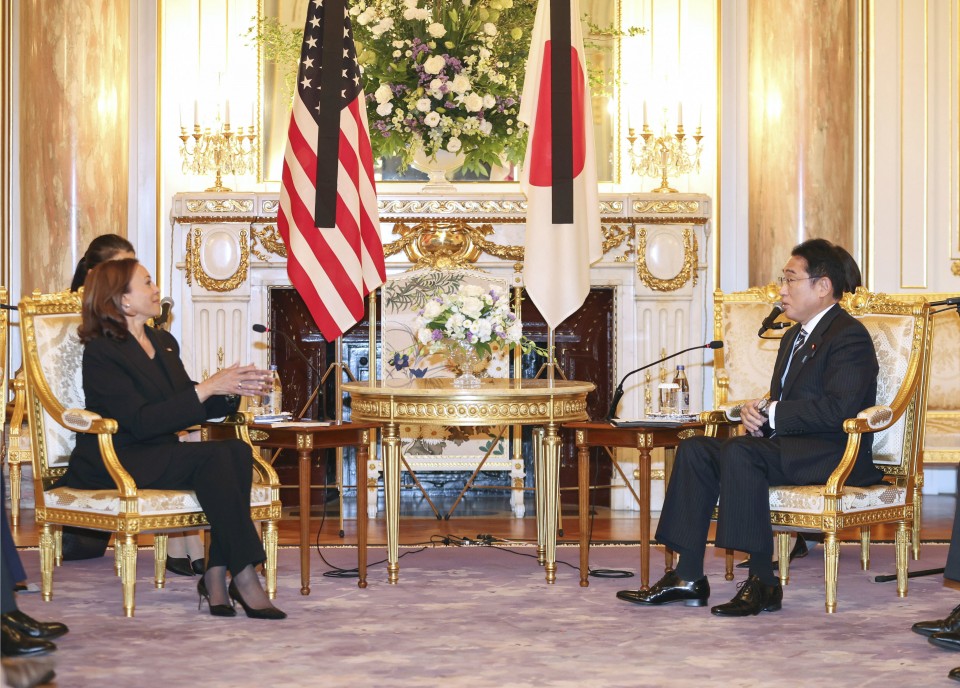 "The alliance between Japan and the United States is a cornerstone of what we believe is integral to peace, stability and prosperity in the Indo-Pacific region," Harris told Kishida hours after she arrived in Tokyo.

During his talks with Harris at Akasaka Palace, a neo-baroque state guest house, Kishida said, "The most important challenge for Japan and the United States" is to maintain "peace and stability in the Indo-Pacific region."

The Japanese premier and the U.S. vice president exchanged views as the outlook for global security has become more uncertain in the wake of Russia's invasion of Ukraine in February and Communist-led China's apparent ambition to conquer self-ruled Taiwan.

China and democratic Taiwan have been governed separately since they split in 1949 due to a civil war. Beijing regards Taiwan as a renegade province to be reunified with the mainland, by force if necessary. China also claims the Senkakus, calling them Diaoyu.

Kishida and Harris discussed China's "aggressive and irresponsible provocations" in the Taiwan Strait and reaffirmed the significance of preserving peace and stability across the strait, the White House said.

As for North Korea, they condemned Sunday's ballistic missile launch by the nuclear-armed country while vowing to join hands to address the threats posed by the nation, it added.

Kishida has said the controversial state-sponsored ceremony for Abe would serve as an important opportunity to communicate with other countries, but no incumbent leaders of the Group of Seven industrialized nations will take part in the funeral on Tuesday.

Abe, Japan's longest-serving prime minister, was fatally shot by a gunman during an election campaign speech in early July. Kishida swiftly decided to host a state funeral for Abe, touting the political achievements of the former leader.

In Japan, however, opposition to Abe's state funeral has been mounting, given his divisive political stances, various scandals and the ceremony's cost.

Japan and the United States, along with Australia and India, have recently shown they are keen to strengthen cooperation with Indo-Pacific democracies. The four countries have formed the "Quad" partnership to counter China's growing clout in the region.

Abe was one of the political leaders to promote the "Free and Open Indo-Pacific" strategy designed to urge democratic nations in the Asia-Pacific region to bolster relations.

The Japanese government said that around 4,300 people would likely join the state funeral for Abe in Tokyo, including roughly 700 people representing more than 200 countries, regions and international organizations.

Abe's state funeral will be only the second for a former prime minister in the post-war period, following one held for Shigeru Yoshida, who in 1951 signed the San Francisco Peace Treaty that allowed Japan to regain its sovereignty.

Still, holding a state funeral for a former premier in Japan has no legal basis. The government has estimated allocating over 1.6 billion yen ($11.16 million) of taxpayers' money for Abe's funeral, but the total cost could balloon, triggering a public backlash.

Canadian Prime Minister Justin Trudeau, meanwhile, will not travel to Japan as planned for Tuesday's state funeral in order to focus on supporting those affected by a powerful hurricane that ripped into the east coast of the nation over the weekend.

He was to be the only leader of a G-7 country to visit Japan for the funeral.