Ministers from 14 member states of the U.S.-led Indo-Pacific economic framework are expected to declare the start of formal negotiations this week in Los Angeles, informed sources say, as they work to codify a rules-based economic order in the fast-growing region.

The two-day meeting from Thursday in Los Angeles will be the first in-person ministerial gathering of the Indo-Pacific Economic Framework for Prosperity, known as the IPEF, which U.S. President Joe Biden's administration has created as a vehicle to counter China's ascendance in the region. 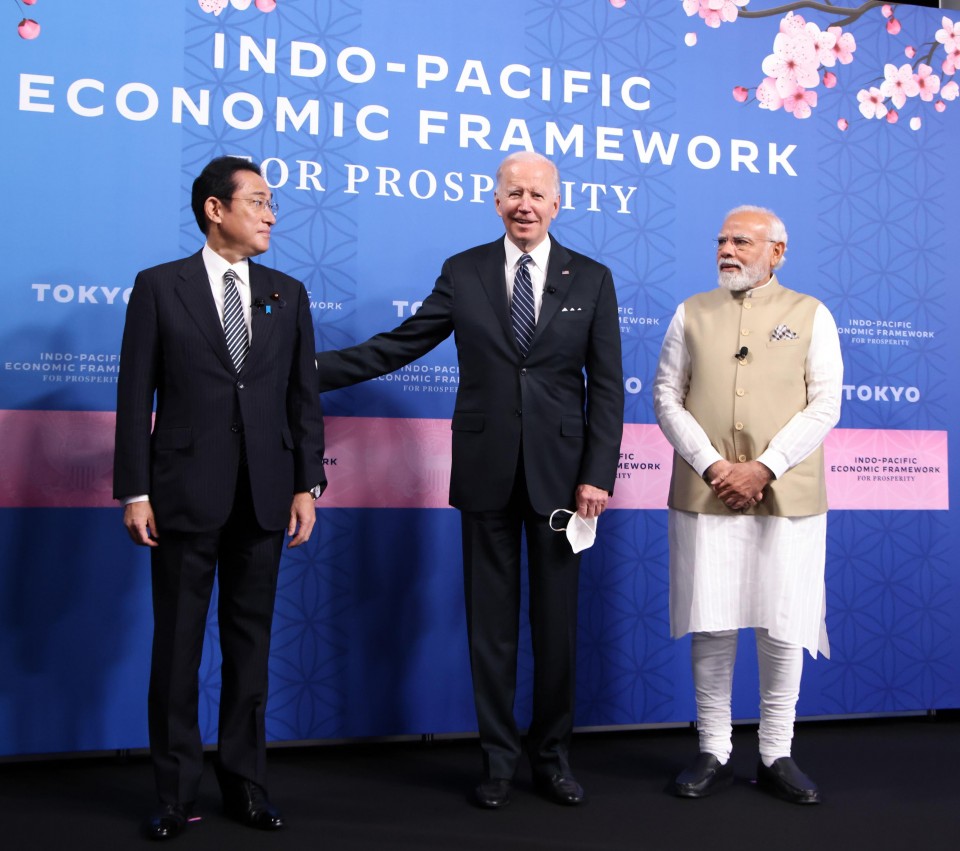 (From L) Japanese Prime Minister Fumio Kishida, U.S. President Joe Biden and Indian Prime Minister Narendra Modi attend a photo session at the start of the launch event of the Indo-Pacific economic framework, or IPEF, in Tokyo on May 23, 2022. (Kyodo)

Unlike a conventional trade agreement, the IPEF does not involve tariff cuts and trade liberalization which are sensitive issues in the United States. Biden's predecessor, Donald Trump, withdrew the world's biggest economy from the Trans-Pacific Partnership trade deal in 2017 over such concerns.

Instead, the IPEF, which collectively accounts for about 40 percent of world gross domestic product, focuses on setting high standards in new areas like the digital economy and supply chains for semiconductors and other strategically important materials.

The IPEF, which Biden announced during his trip to Japan in May, is viewed as the United States re-engaging in the Indo-Pacific and offering a Washington-led alternative to Beijing's economic coercion and debt-trap diplomacy.

The IPEF consists of four policy pillars it aims to promote -- fair trade, supply chain resilience, clean energy together with decarbonization and infrastructure, as well as measures against tax avoidance and corruption.

In a show of flexibility, members can choose to join any of the four pillars individually in what trade experts call a decentralized pillar approach.

Nishimura promised Japan would take an active role in the talks during a virtual face-to-face meeting in late August with Tai and with Raimondo over the phone.

The Office of the USTR will be in charge of fair trade measures and the rest will be under the leadership of the Commerce Department, according to the U.S. government.

In Los Angeles, member states are expected to determine which countries will join negotiations for which of the four pillars, an outcome that will be released in a post-meeting document, according to Japanese government officials.

The experts say the decentralized pillar approach appears to have lowered participation hurdles for some countries, especially those in Southeast Asia.

The ministers will aim to build a structure capable of ensuring a stable supply of vital products such as chips and minerals like rare earths even at times of natural disaster and under other contingencies, the Japanese officials said.

They also intend to enhance cooperation in new energy technologies utilizing hydrogen and ammonia, as well as over renewable energy, they said.

The Biden administration is hoping negotiations related to each pillar will conclude in one year or up to 18 months, according to the Center for Strategic and International Studies, a Washington think tank.

A summit meeting of the Asia-Pacific Economic Cooperation slated for November 2023 is viewed as the informal deadline for finalizing IPEF agreements, with some experts hoping to see "early harvest" wins in areas such as trade and supply chain issues.