Japan's currency intervention is likely to prove ineffective in overturning the underlying weakness of the yen against the U.S. dollar, even as its first attempt in 24 years in the foreign exchange market to strengthen its currency took immediate effect.

The dollar briefly plummeted below 141 yen from a 24-year high near 146 yen Thursday after the government stepped into the market to stem the yen's slide. The action took the market somewhat by surprise, even though repeated warnings by Finance Minister Shunichi Suzuki against the yen's recent rapid decline to 24-year lows against the U.S. currency had left the market nervous, said Masahiro Yamaguchi, head of investment research at SMBC Trust Bank.

An immediate sharp rally of the dollar looks difficult amid fears of another market intervention by Japanese authorities, at least for now. Still the dollar remains on course to return to the 145 yen level and possibly rise to 147.66 yen, a level unseen in more than 32 years, market analysts say. 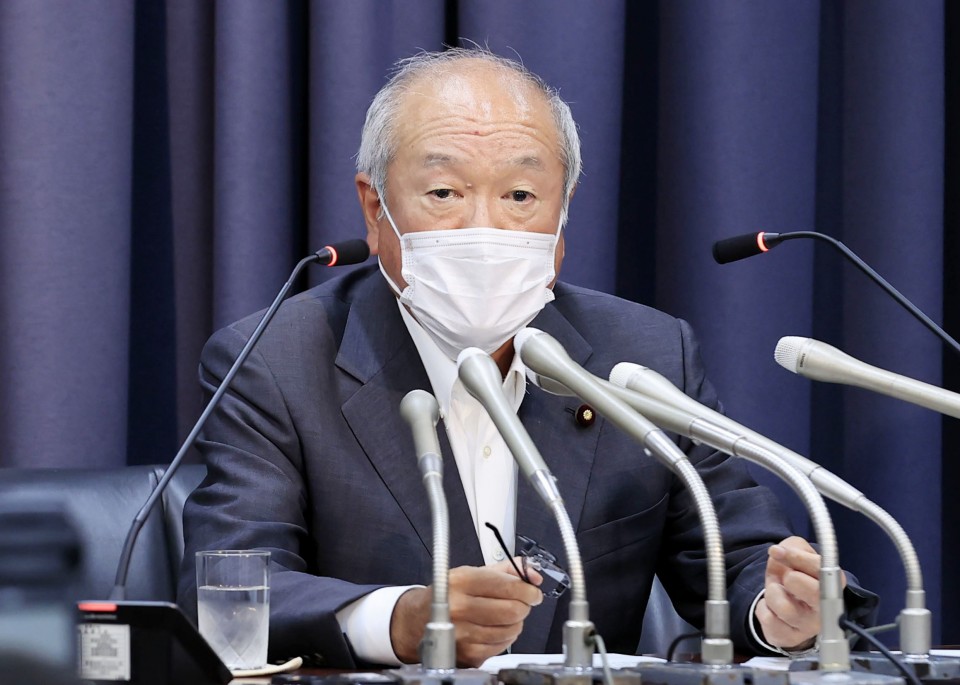 Japanese Finance Minister Shunichi Suzuki speaks at a press conference at the ministry on Sept. 22, 2022, after Japan conducted yen-buying intervention for the first time since 1998. (Kyodo)

"Until (the Bank of Japan) changes its policy, the yen will not stop falling as the impact of (currency) intervention will be limited," Yamaguchi said. The government's attempt is a "drop of water on a hot stone."

Behind the yen's fall since early March is the BOJ's stubborn determination to maintain its monetary easing policy at a critical time when the Federal Reserve, like central banks in many other countries, is continuing its rate hike campaign to beat inflation.

The Swiss National Bank on Thursday raised its benchmark interest rate by 0.75 percentage point, marking the end of an era of negative rates in Europe.

The BOJ left its ultraloose policy unchanged on Thursday, contrasting sharply with the Fed, which implemented a policy rate hike of 0.75 percentage point on Wednesday and suggested more aggressive increases to come.

The divergence in approach will only widen the interest rate differential between the United States and Japan, luring investors to the dollar.

The rate gap is unlikely to shrink anytime soon, given BOJ Governor Haruhiko Kuroda said at a press conference Thursday that he does not anticipate rate hikes in the near future to prop up the pandemic-stricken economy.

"When I say 'for the time being,' I don't mean two or three months. I'm talking about two or three years," said the governor, whose term as BOJ chief will end in April.

The strength of the dollar also reflects the solid recovery of the world's biggest economy from the COVID-19 shock.

"The yen will become naturally strong once the U.S. economy starts slowing down, which won't be until early next year," said Tomoichiro Kubota, senior market analyst at Matsui Securities Co.

Analysts say Japanese authorities could act again if the dollar climbs to around 145 yen, as seen in Thursday's intervention, and market players will be nervous about crossing that line.

Masato Kanda, vice finance minister for international affairs, told reporters after the intervention that the ministry "will continue to watch foreign exchange movements with a sense of urgency."

Analysts say yen-buying intervention is more difficult than yen-selling as authorities have to rely on foreign reserves to sell in the market.

Japan's foreign reserves, mainly composed of securities and deposits denominated in foreign currencies, stood at $1.29 trillion at the end of August, according to official data.

Market participants are also skeptical that Japan will be able to continue intervening in the market. It would be difficult to get the nod from U.S. authorities as they are likely to be concerned about a dollar slide pushing up import costs and inflation, analysts said.