Japan is on alert against speculative yen moves against the U.S. dollar and is ready to act again in the currency market if needed, the finance minister said Monday, after what is estimated to be the largest-ever daily yen-buying intervention had a "certain effect."

Finance Minister Shunichi Suzuki said the government is "strongly concerned" about one-sided, rapid yen moves. Bank of Japan Governor Haruhiko Kuroda also said such currency fluctuations are not desirable and backed Japan's first intervention to prop up the currency since 1998 as "appropriate."

Thursday's yen-buying, dollar-selling intervention by Japanese authorities totaled an estimated 3.6 trillion yen ($25 billion), surpassing the previous record of 2.62 trillion yen on April 10, 1998, according to the Totan Research. The Finance Ministry is scheduled to release official data on Friday. 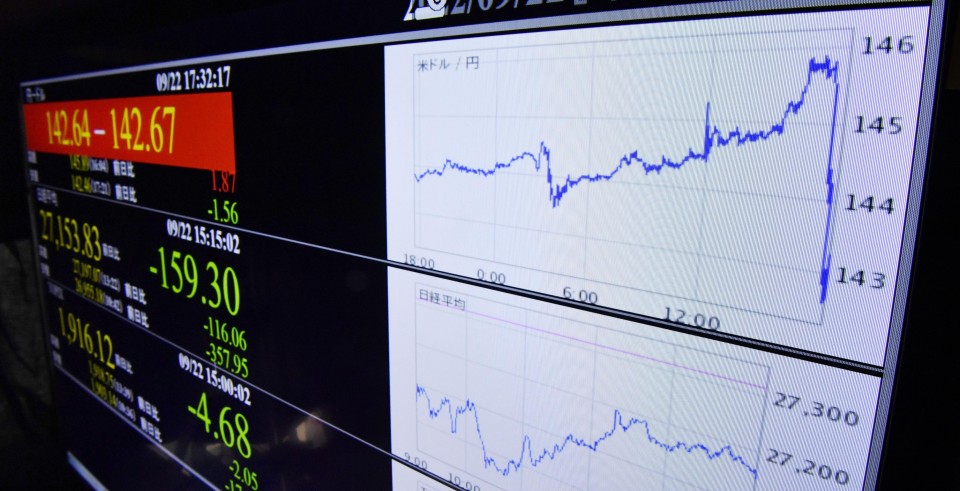 A currency monitor on Sept. 22, 2022, in Tokyo shows the dollar slipping below 143 yen in an initial response to Japan's first yen-buying intervention since 1998 to stem the Japanese currency's further fall as it sank to a fresh 24-year low in the 145 range against the dollar. (Kyodo) ==Kyodo

"We took appropriate action against excessive volatility driven by speculators. The intervention has had a certain effect," Suzuki said at a press conference. "There is no change in our stance that we will take (further) action if needed."

The yen rose against the U.S. dollar immediately after the intervention, which followed accelerated yen-selling sparked by Governor Kuroda's remarks dismissing the possibility of rate hikes in the next few years.

Kuroda reiterated Monday that the BOJ's ultralow rate policy should continue because its 2 percent inflation target will not be attained sustainably anytime soon. The economy, hit by the COVID-19 pandemic and higher commodity prices, still need support, according to the governor.

After crossing the psychologically important 145 yen, the dollar fell to the 140 yen range following the intervention. It has bounced back and was trading near the 144 yen line on Monday.

"It's desirable that currencies move stably, reflecting economic and financial fundamentals. The rapid, one-sided fluctuations seen thus far are negative for the economy," Kuroda said at a press conference in Osaka, western Japan.

Market analysts doubt the effect of yen-buying by Japanese authorities in reversing the broader trend of a strong dollar. The BOJ's monetary policy is set to diverge further from its global peers, which have already begun raising interest rates to rein in stubborn inflation.

Japan had around $1.29 trillion in foreign currency reserves as of August, including around $136 billion in deposits that can be used immediately for purposes such as currency intervention. 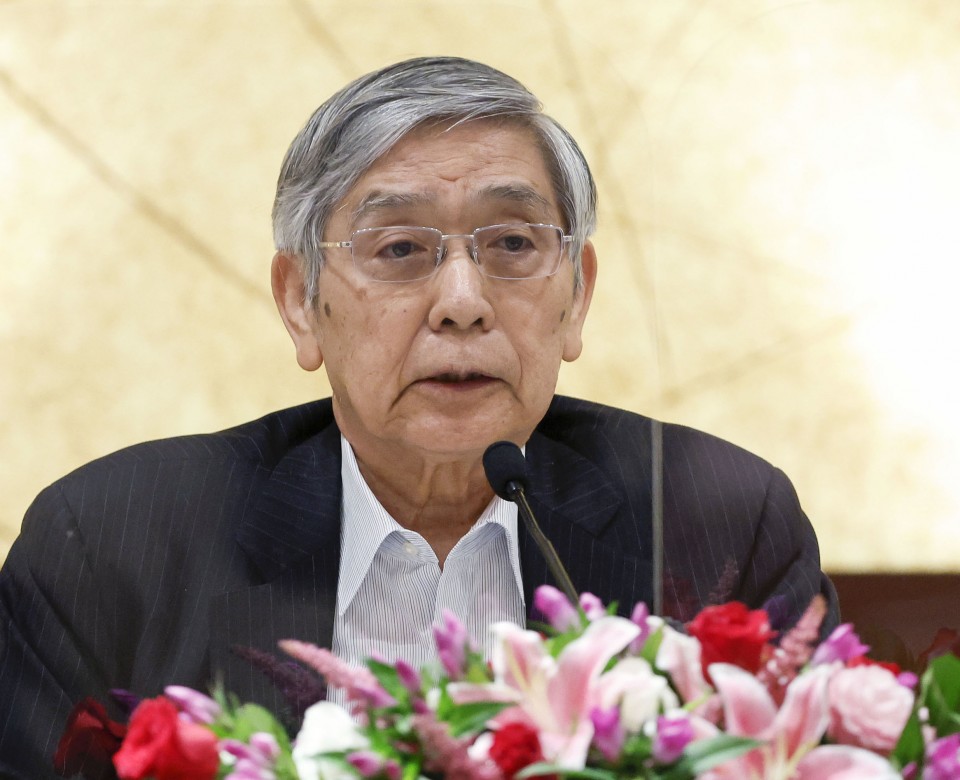 Financial markets expect the BOJ will change its policy guidance that it expects short- and long-term interest rates to remain "at present levels or lower" for the time being.

Kuroda, who shot down such speculation last week, changed his tone on Monday. "It may not necessarily be two or three years" until the guidance is changed, the governor said, adding it will hinge on the COVID-19 situation.

Stepping into the currency market was seen as a last-resort move for Japanese authorities, who had gradually raised their alert level.

He brushed off the view that the government and the BOJ are moving in opposite directions, with the former seeking to prevent the yen's slide while the Japanese central bank remains committed to its dovish stance, blamed for the currency's depreciation.

"The objectives and effects of currency intervention and monetary policy are different...but they are complementary," he said.

He again dismissed the option of allowing 10-year Japanese government bond yields to trade in a wider band than the current range of minus 0.25 percent and 0.25 percent, a tweak that some BOJ watchers have cited as a possibility.

Prime Minister Fumio Kishida, who has supported the BOJ's efforts toward achieving the inflation target, has warned that the government will respond "resolutely" to volatile currency moves.

The government and the BOJ are on the same page, Suzuki said before Kuroda spoke Monday in Osaka, where he met with local business leaders. The BOJ is in charge of carrying out currency market intervention for the government.

"Governor Kuroda expressed Thursday in his remarks his strong concerns about the rapid depreciation of the yen. We have a shared view on this with the BOJ," Suzuki said.