A U.N.-backed tribunal in Cambodia trying former Khmer Rouge leaders over the 1970s genocide in the country upheld Thursday a lower-court sentence of life imprisonment against Khieu Samphan, the radical communist regime's former head of state. 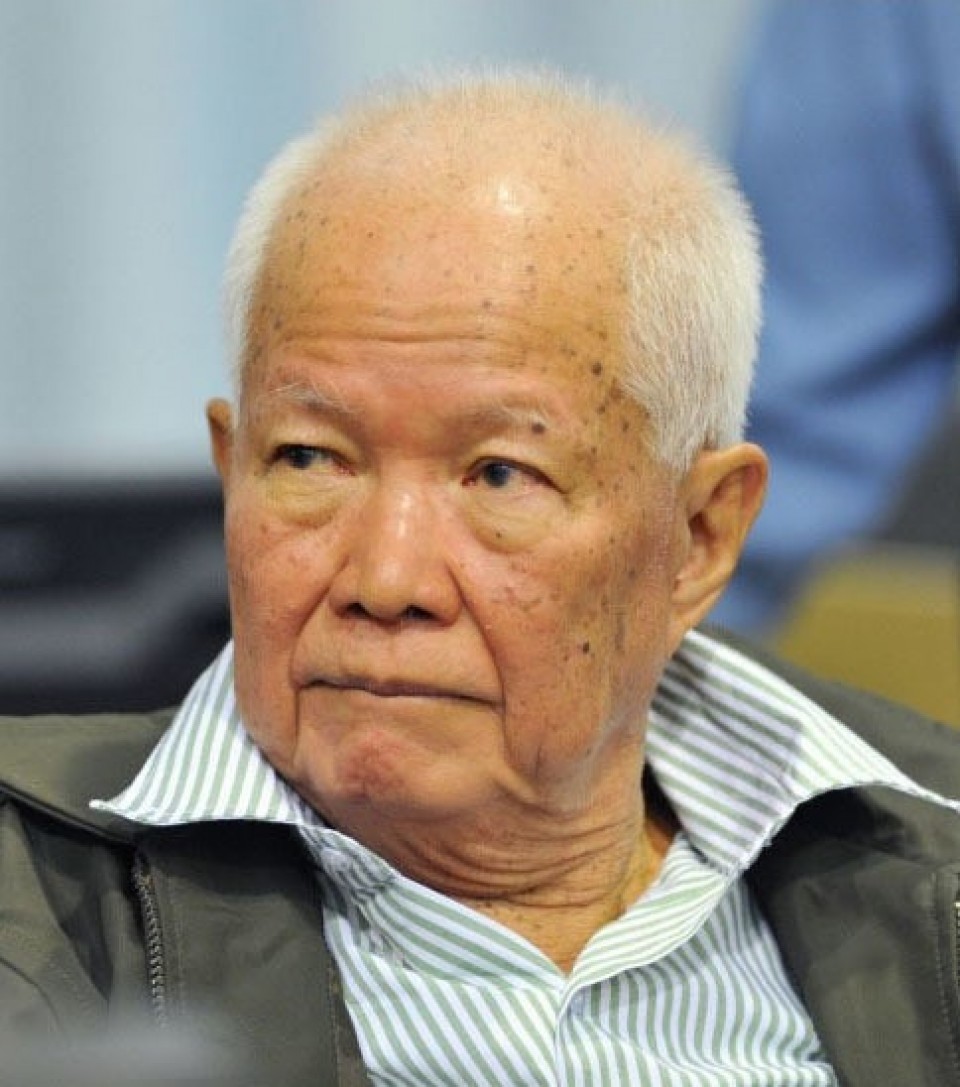 Khieu Samphan. (Photo courtesy of Extraordinary Chambers in the Courts of Cambodia)(Kyodo)

Thursday's decision was the final judgment of the Extraordinary Chambers in the Courts of Cambodia, which has adopted a two-tier trial system. With no one else being tried, it marks the end of the judicial process launched in 2006 to bring to justice perpetrators of the 1975-1979 reign of terror that is believed to have claimed nearly 2 million lives.

Khieu Samphan, 91, is among five Khmer Rouge figures indicted for trial at the tribunal. The court, comprised of Cambodian and international judges, convicted only three of them, including Khieu Samphan. Four of the five are already dead, three of them passing away before proceedings at the court in their cases were completed.

The initial hearing of Khieu Samphan's trial began in 2011. He was sentenced to life in prison in 2014 for crimes against humanity, mainly over the forced relocation of Phnom Penh residents that led to their deaths from starvation. The sentence was finalized in November 2016.

In a separate trial, Khieu Samphan was sentenced to life imprisonment in November 2018 for genocide against Cambodia's ethnic Vietnamese minority and other crimes. The defendant appealed the ruling, pleading not guilty.

Seeking to overturn the lower court ruling, his defense argued that evidence was used selectively to secure his conviction in the trial.

But the court judged that the former Khmer Rouge leader bears grave responsibility for the crimes and ruled, "Given the extent of the tragedy and the sufferings caused by the defendant, life imprisonment is justified."

Hearing the ruling, Kong Sam Onn, a lawyer for Khieu Samphan, said, "There is nothing to say but to accept the verdict as it is final."

Stephen Mathias, assistant secretary general for legal affairs of the United Nations, said, "Today's judgment highlights that the international community is ready and willing to ensure accountability for the most serious international crimes," though the crimes were committed decades ago.

Pol Pot, the leader of the Maoist-inspired movement who served as prime minister of Democratic Kampuchea, died in 1998 before the court was launched.

Nuon Chea, the chief ideologist and No. 2 leader of the regime, was tried together with Khieu Samphan and sentenced to life in prison in 2014. He died in 2019 while appealing another conviction that put him behind bars for life.

The third Khmer Rouge figure convicted by the court was Kaing Guek Eav, also known as Duch, who was head of the notorious Tuol Sleng prison in the capital. He died in 2020 while serving a life sentence handed down in 2012 for the deaths of more than 12,000 people at the torture center, known as S-21.

Former Foreign Minister Ieng Sary and his wife Ieng Thirith, who served as social affairs minister in the Pol Pot-led regime, died while proceedings were under way.

Deputy Prime Minister Bin Chhin, who has overseen the Khmer Rouge trial, said Thursday that the ruling is a "success" for Cambodian people, the government, the United Nations and the international community, who were involved in the tribunal, adding that the court has become a model for trials against serious crimes.

But as the tribunal comes to a close after 16 years, ordinary Cambodians seem to have mixed feelings about the drawn-out process, with many of them eager to move on from the painful period in the nation's history.

Hang Nisay, director of the Tuol Sleng Genocide Museum, a memorial site of the S-21 prison, said the tribunal has found justice for survivors of the Khmer Rouge regime by bringing its leaders to trial, but acknowledged the process took a long time to conclude.

The museum director was born seven years after the Khmer Rouge regime collapsed in 1979. He said parents do not appear willing to encourage their children to visit the museum because of its association with death and torture. "They do not seem to really want their children to know about this bitter history."

Hang Nisay said he finds it lucky to be working at the museum because "I can learn what happened, while many other young people would rely on their parents to share experience in the Khmer Rouge times."

One of the survivors of S-21 prison, Bou Meng, 86, said, he watched the trial Thursday and listened to the verdict.

"I'm satisfied with it despite the fact that my wife who was killed during Khmer Rouge regime will never come back," said Bou Meng, who also lost his two children during the regime's rule.

Japan has been the largest donor to the court, shouldering about 30 percent of the total contributions. It is followed by Australia and the United States.