A former diplomat dismissed by Myanmar's military junta for his opposition to last year's coup has criticized Japan for inviting the head of the Myanmar Embassy in Tokyo to former Prime Minister Shinzo Abe's state funeral.

Aung Soe Moe said that if Prime Minister Fumio Kishida's government allows Myanmar Ambassador to Japan Soe Han to attend Tuesday's funeral alongside other foreign representatives such as U.S. Vice President Kamala Harris and Australian Prime Minister Anthony Albanese, it would be a de-facto recognition of the junta and the Feb. 1, 2021 putsch. 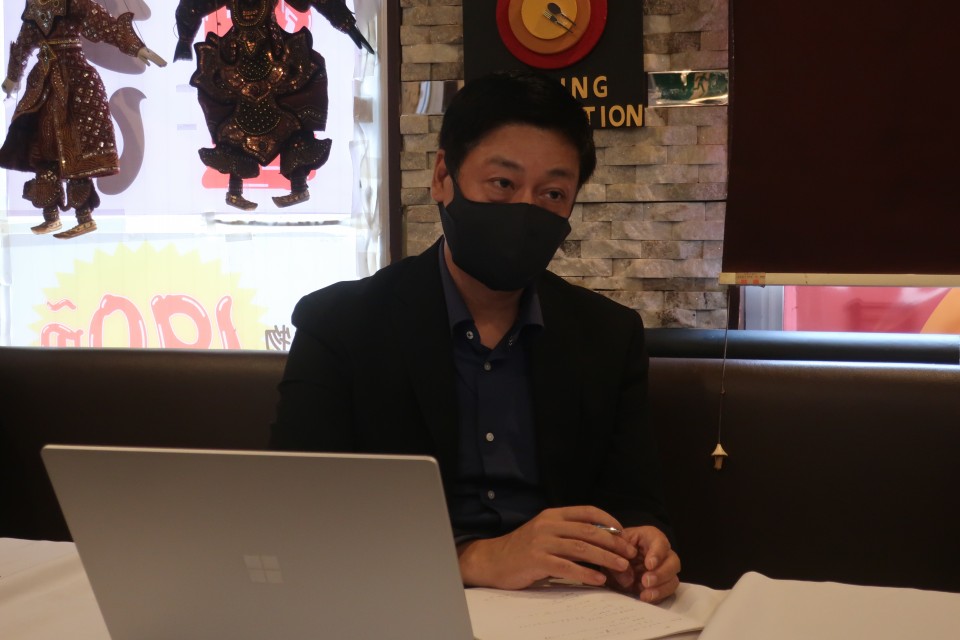 Aung Soe Moe, a former first secretary of the Myanmar Embassy in Japan, speaks to reporters at Spring Revolution Restaurant in Tokyo on Sept. 24, 2022. (Kyodo)

"We, Myanmar residents in Japan, have asked the Japanese Foreign Ministry not to invite anyone from the military to Mr. Abe's state funeral, a major international event," Aung Soe Moe, 53, told reporters Saturday in Tokyo.

"What generals want is official recognition of their regime by the international community and to make the takeover of government a fait accompli," he said, speaking through an interpreter.

"Japan did not invite Min Aung Hlaing, but it would not make much difference if the Kishida government allows the junta-appointed ambassador to attend this state-level event," he said.

Since Aung Soe Moe was sacked from the Foreign Ministry for joining the civil disobedience movement against military rule, the former first secretary of the Myanmar Embassy in Tokyo has devoted himself to activities in Japan to bring democracy back to his homeland.

Aung Soe Moe said he and other pro-democracy advocates do not understand why Kishida has invited a representative of a violent regime that has cracked down on opposition among its people, including targeting women and children, to the funeral of a former leader who was also a victim of violence.

Abe, Japan's longest-serving prime minister, was gunned down on the campaign trail in Nara, western Japan, on July 8.

Since the Myanmar military detained civilian leader Aung San Suu Kyi and toppled her democratically elected government, the junta has killed over 2,300 demonstrators and other citizens and left some 974,000 people displaced, according to U.N. and other data.

Asked if he thinks Japan should invite a representative of Myanmar's shadow civilian leadership, the National Unity Government, to Abe's funeral, Aung Soe Moe said some people from Myanmar believe so but he personally thinks Japan should follow Britain's lead.

"While many Myanmar citizens support the NUG and regard it as their representative, Japan's invitation to the military for the state funeral is not fair to Myanmar people," he said.

While Japan has condemned the coup and urged the junta to reverse course, Tokyo has yet to recognize the NUG -- launched in April last year by deposed pro-democracy parliamentarians, anti-coup protestors and ethnic minority leaders who oppose military rule -- as the legitimate governing body of Myanmar.

"We oppose Japan letting the figure who we do not see as our representative attend Tuesday's event," Aung Soe Moe said. "We would like Japan to sever ties with the Myanmar military immediately."