Britain's Queen Elizabeth II will be remembered for offering the nation a sense of "calm" during turbulent times as well as being a first-rate conciliator, according to a royal biographer.

Royal writer Hugo Vickers said the queen, who died Thursday at age 96, fulfilled her role with "dignity" and showed immense "steadfastness" throughout her long reign.

He thinks her death will leave the nation in a "state of shock" as, for many people, she has always been on the throne.

The queen was one of the world's longest-serving monarchs and was sovereign in 15 of the 56 Commonwealth countries, including Britain, Australia and Canada. 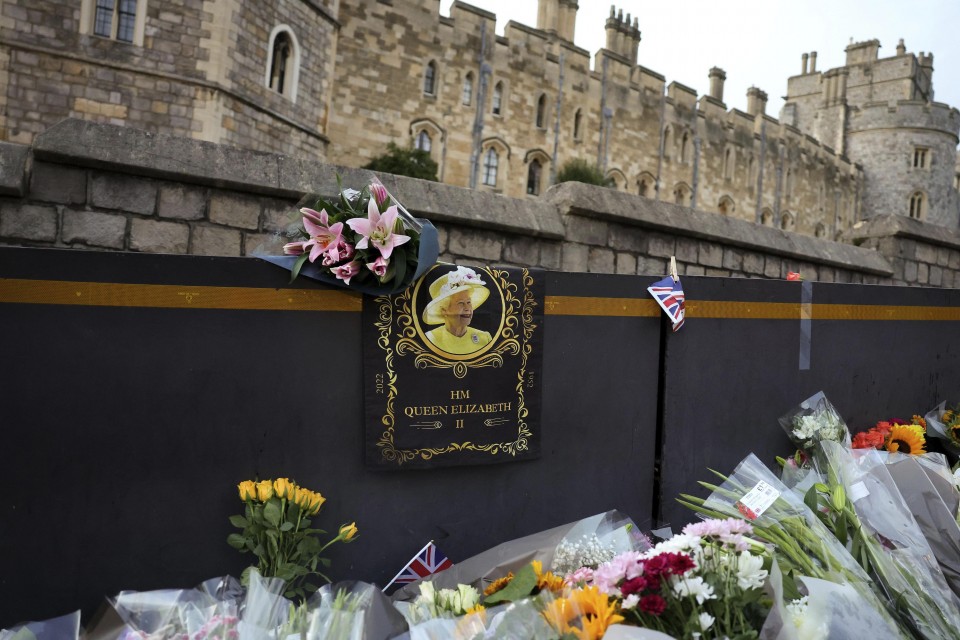 Tributes are laid outside of Windsor Castle on Sept. 8, 2022, in Windsor, England. (Getty/Kyodo)

Queen Elizabeth, one of world's longest-reigning monarchs, dies at 96

In an interview with Kyodo News, Vickers said, "She established an atmosphere of calm in a very changing world. Whatever the situation, it was always very reassuring to know the queen would remain in place.

"When Diana, Princess of Wales died, she went on TV and appeared very matriarchal and calm and told everyone to pull themselves together."

The expert believes one of her main assets was to act as a "conciliator" and heal the wounds of the past.

He said, "On many occasions, she had to visit countries where we had had big troubles in the past, such as Japan. Many were angry at these visits but, in the case of Japan, she was establishing better diplomatic relations.

"The same can be said for her relations with Russia, China, Germany and Ireland. Whatever she thought privately, she always put the country first."

Indeed, Vickers argues the queen was an excellent "ambassador" who never put a foot wrong even when she had to deal with some of the world's most unsavory leaders.

Her quiet diplomacy was perhaps best exemplified by managing to keep the Commonwealth together during some rocky times.

One of the queen's greatest qualities was to show immense dignity and steadfastness when the royal family was hit in the 1990s by various scandals and claims that it lacked compassion and was out of touch with ordinary people.

Vickers said, "I hope there will be a sense of gratitude and respect from the public for her steadfastness and vision as queen.

"There were times when some members of the royal family -- not so much the queen -- were described as dysfunctional. That must have been distressing, but she never lost her nerve and kept on going."

"I think she was very happy in her last few years. She had three heirs, everything was calm, and the word dysfunctional was no longer used to describe the royal family."

As to the future, the biographer believes King Charles will try and "slim down" the number of royal family members performing official duties and possibly make it a more informal organization.

It is likely the new king will become head of the Commonwealth following his mother's death, but any decision is subject to the member states.

Vickers "hopes" the nation will welcome the new King Charles, although, even now, many people still blame him for the breakdown of his marriage to Diana, Princess of Wales, in the early 1990s.

Originally, the plan had been to name Charles's second wife, Camilla, Duchess of Cornwall, princess consort rather than queen consort, as many people felt she was also responsible for the breakup of the prince's first marriage.

However, following their wedding in 2005, the couple's popularity grew, and in 2022 Queen Elizabeth said she wanted Camilla to be titled queen consort upon her son's accession to the throne.

Over the next few days, there will be a flurry of behind-the-scenes activities as royal officials prepare for a new monarch and make arrangements for the queen's state funeral.

Usually, within 24 hours of the announcement, an Accession Council -- a group of senior politicians and officials -- is convened, normally at St. James's Palace.

The council proclaims the new king. The text is called the Accession Proclamation, and it is later read out from a palace balcony.

The king then joins the council, and he will make a personal declaration relating to the queen's death. He will also make an oath to maintain the security of the Church of Scotland.

The new king will later be expected to make another declaration -- which is essentially a commitment to being faithful to the Protestant religion -- at the next state opening of parliament or at his coronation, whichever is first.

The queen's state funeral is likely to be one of the most-watched televised events in history. Leaders from across the Commonwealth and the world are expected to descend upon London in the coming days.

The last state funeral in Britain was in 1965 for former British Prime Minister Winston Churchill.

The queen's coffin is likely to be taken in a military procession to Westminster Hall, where it will lie in state for a few days.

The coffin will be taken from there on a gun carriage drawn by Royal Navy soldiers to the funeral ceremony, which will either be at St. Paul's Cathedral or Westminster Abbey. There will be a 21-gun salute as the coffin is taken through the streets of the capital.

The queen is likely to be buried at St. George's Chapel, Windsor Castle. The royal family will then enter an official period of mourning, probably for several months. It is unclear when the new king's coronation will take place, but precedent shows it could be over a year from now.