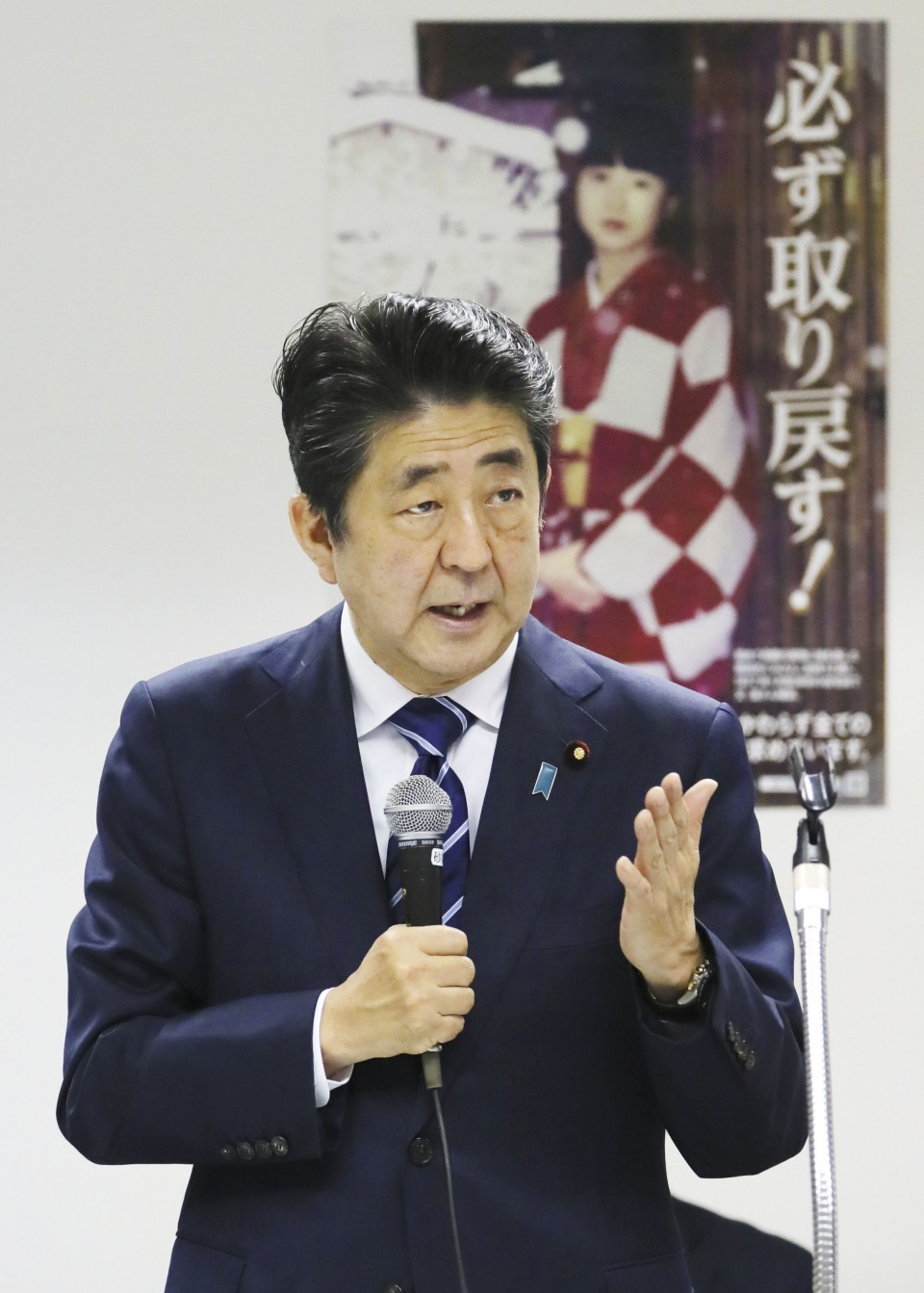 Japanese Prime Minister Shinzo Abe speaks in Tokyo on May 19, 2019, during a meeting with relatives of Japanese nationals abducted by North Korea in the 1970s and 1980s. (Pool photo)(Kyodo) ==Kyodo

Japan under then Prime Minister Shinzo Abe rejected a North Korean proposal to return two Japanese men, including a victim of abductions by Pyongyang, in around 2014 and 2015, sources involved in the negotiations said Friday.

Tokyo turned down the proposal by Pyongyang, fearing that the nuclear-armed country could try to end the long-standing issue of abductions of Japanese nationals by North Korea in the 1970s and 1980s, according to the sources.

It is the first revelation that North Korea had sounded out the government of Abe, who adopted a hard-line stance toward Pyongyang by putting "maximum pressure" on the nation to temporarily return victims of the abductions.

In 2014, North Korea made an agreement with Japan to investigate the abductions, although Pyongyang later broke the promise.

Japan and North Korea have no diplomatic ties. The Japanese government recognizes 17 nationals as having been abducted by North Korea, and the issue has prevented the two countries from starting talks on the normalization of bilateral relations.

Five abductees were brought back to Japan in 2002 after then Prime Minister Junichiro Koizumi visited Pyongyang and held a historic summit with late North Korean leader Kim Jong Il on Sept. 17 that year.

The two men were Minoru Tanaka, who is on the government list as having been abducted by North Korea, and Tatsumitsu Kaneda, one of more than 800 possible abductees, the sources said.

Pyongyang had claimed that among the remaining 12 abductees, eight had died and the other "four" never entered the nation, but it explained "three," excluding Tanaka, never entered the country when North Korea proposed the return of the two men.

Under the Pyongyang Declaration, signed by Koizumi and Kim, the two Asian nations agreed to make "every possible effort for an early normalization of the relations," while Japan vowed to extend economic cooperation to North Korea after ties were normalized.

Koizumi received words of apology for the abductions from Kim. Abe accompanied Koizumi to North Korea as a deputy chief Cabinet secretary.

The government of Abe, who served as prime minister from 2006 to 2007 and again for eight years through 2020, rejected North Korea's proposal on the grounds that accepting it would allow Pyongyang to terminate negotiations on the abduction issue, the sources said.

There was also concern that the two men could go back to North Korea soon even if they returned to their home country, as they might have been unwilling to settle down in Japan, the sources added.

"We thought it was an unacceptable proposal," one of the sources said.

The Abe family's association with the issue goes back decades. In 1988, when the parents of a university student, who went missing in Europe and was believed to have been abducted by Pyongyang, visited the office of Abe's father, former Foreign Minister Shintaro Abe.

In May 2014, Japan and North Korea reached an accord in Stockholm for negotiations toward the settlement of the abduction issue, in principle. Japan relaxed its sanctions on Pyongyang, which, in turn, promised a full-scale investigation into it.

But North Korea repeatedly postponed reporting the results of its investigation. The nation then disbanded its investigative team and suspended the probe after Japan levied further sanctions in February 2016 in reaction to Pyongyang's nuclear and missile tests.