The city of Sapporo, bidding to host the 2030 Winter Olympics, said Monday it has canceled its planned visit to the International Olympic Committee headquarters in mid-September over scheduling difficulties from both parties.

"It has nothing to do with the bribery case surrounding the Tokyo Olympics and Paralympics," Mayor Katsuhiro Akimoto said in reference to the arrest of Haruyuki Takahashi, a former Tokyo Olympic organizing committee executive.

Hironori Aoki, the former chairman of clothing retailer Aoki Holdings Inc., and two others have been arrested in connection with alleged bribery of Takahashi to seek favors during the games' sponsorship selection process. 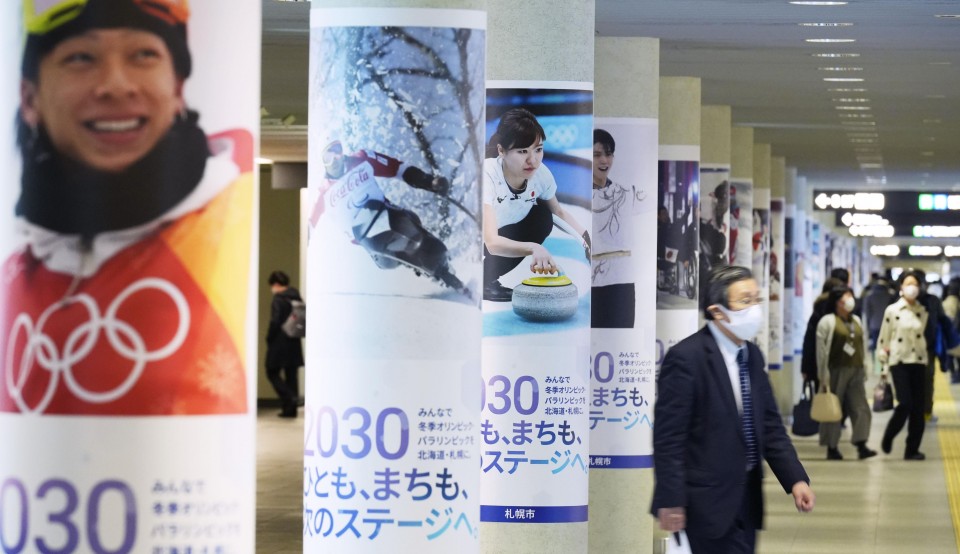 Posters to promote Sapporo's bid to host the 2030 Winter Olympics and Paralympics are seen in an underground shopping arcade in the northern Japan city on Feb. 15, 2022. (Kyodo) ==Kyodo

The mayor planned to visit Lausanne to report on how the mood-lifting and preparations are going for the potential hosting of the 2030 games before his Sept. 14-17 visit to Munich for the 50th anniversary of it becoming Sapporo's friendship city.

"I and the IOC spoke over the weekend. The scheduling didn't go well and we mutually proposed to cancel it this time," Japanese Olympic Committee President Yasuhiro Yamashita, who was also to attend the meeting in Lausanne, told reporters.

"During the conversations with the IOC, they said (the case) was to do with the Tokyo Games and is separate from Sapporo's bid," he added.

It was a sudden turn of events for the meeting planned months in advance. A source close to Sapporo's bid said the bribery case could be one of the factors behind the cancellation.

"The issue was the timing of it (the meeting). Visiting them now would only draw criticism. There was no other option but to take that decision," said the source.

The host candidates for the 2030 games will be trimmed down by the IOC by December before the host city is selected during the IOC Session in May-June next year.